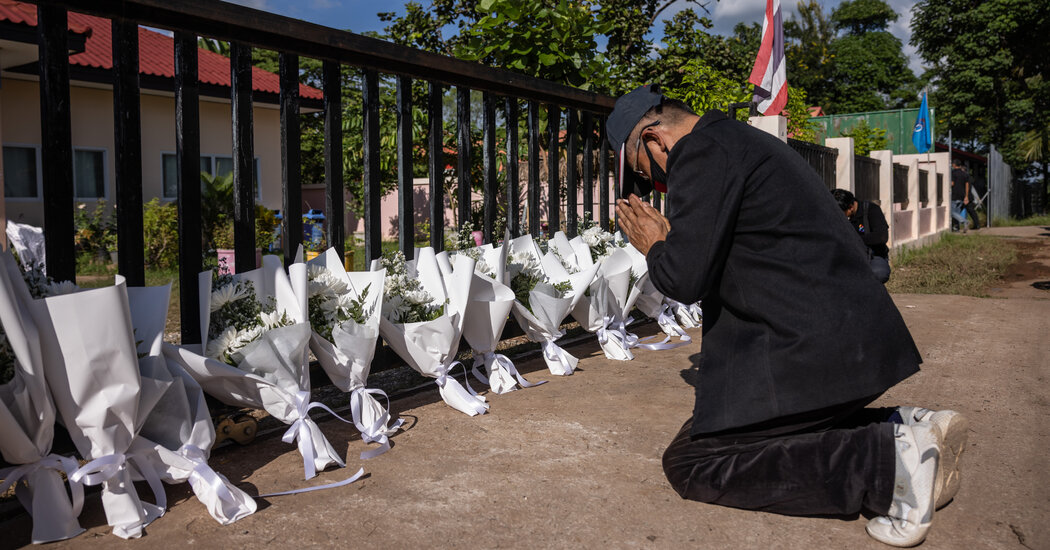 Ongsa and Phupha had enrolled at the day care center last year. Like many people from the province, Ms. Pimpa migrated elsewhere for work, leaving her children to live with their grandmother. Ms. Pimpa works at an office in Ayutthaya Province, about eight hours away by car, and said she made video calls to her sons everyday, visiting when she could.

She had just visited her twin boys last month, she added. “I didn’t think that would be the last time.”

The authorities themselves appeared to be far from answers on Friday, as they disclosed few new details of their investigation into Panya Kamrab, 34, the former police officer identified as the gunman. The attacker’s son appears to have been enrolled in the day care center, but not to have been there on Thursday.

Mr. Kamrab had a court appearance on Thursday that went normally, and his trial on the drug charge was scheduled to begin Friday, according to the national police chief, Gen. Damrongsak Kittipraphat.

But the police chief said that at about 4 a.m. on Thursday, Mr. Kamrab had an argument with his wife, apparently about whether she wanted to live with him, and she called her mother to ask to be picked up. After the massacre at the day care center, the gunman fatally shot himself at his own home, where his wife and son were also found dead.

It was not immediately clear whether the gunman first attacked the center or whether the rampage began at his home. The police said the gunman also shot at people as he fled the day care center.

Wasan Kanwilai, 30, was riding on his motorbike Thursday afternoon when a white Toyota pickup from the opposite side swerved into his lane. The vehicle was damaged, its front bumper falling down on one side, and Mr. Wasan followed — eventually spotting three bloodied people lying on the side of the road, either having been shot, run down or injured in some other way, their conditions unclear.

AUSTIN, Texas--(BUSINESS WIRE)--As the first multifamily management company to be recognized in the Public Relations and Marketing Excellence Awards, … END_OF_DOCUMENT_TOKEN_TO_BE_REPLACED

There have been whispers of cooling housing and rental prices in the San Francisco Bay Area, but that hasn't yet translated into practical, noticeable … END_OF_DOCUMENT_TOKEN_TO_BE_REPLACED

Cars pass in Independence Square at twilight in Kyiv, Ukraine, Monday, Oct. 31, 2022. Rolling ... [+] blackouts are increasing across Ukraine as the … END_OF_DOCUMENT_TOKEN_TO_BE_REPLACED