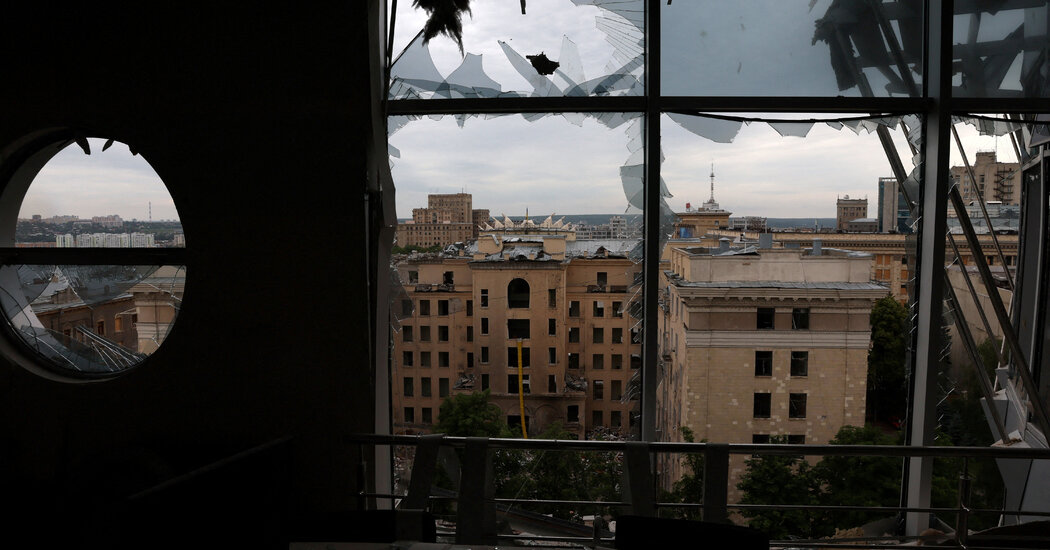 In the weeks before Russia invaded Ukraine, it held joint military drills with its neighbor and ally Belarus, massing tens of thousands of soldiers along the Ukrainian border even as the two countries’ leaders denied reports that the Kremlin was planning to go to war.

Mr. Putin promised to deliver the Iskander-M systems, which have a range of about 300 miles and can carry both conventional and nuclear warheads, “within months,” and also vowed to upgrade Belarusian Su-25 fighter jets, after Mr. Lukashenko asked the Russian leader to make its warplanes capable of carrying nuclear weapons.

“We need to be ready for anything, even the use of serious weaponry to defend our fatherland from Brest to Vladivostok,” Mr. Lukashenko said, referring to Belarus’ westernmost city and Russia’s port in the Far East.

While the men met, the Belarusian Armed Forces were once again holding “mobilization” drills in the area bordering Kyiv, the Ukrainian capital, threatening to aggravate tensions in an already volatile region and prompting Ukraine to put its border guards on high alert.

“Units are being brought to higher levels of combat readiness, practical measures are being taken to accept conscripts, weapons and military equipment are being removed from storage,” a spokesman for the Ukrainian military’s operational command said in a statement this month.

Ukrainian officials and Western observers think it is highly unlikely that Belarus, a former Soviet republic of 9.4 million people, will directly join the war at this time, given the risks of provoking social unrest at home and undermining Mr. Lukashenko’s grip on power. Morale among Belarusian troops has also been shaky, according to Pavel P. Latushko, a former senior Belarusian official who fled the country.

Nevertheless, analysts believe Mr. Lukashenko, an autocrat beholden to the Kremlin, is desperately trying to show his value to Mr. Putin. He has proved a dependable friend ever since Mr. Putin bolstered his security forces to help him put down mass protests that followed an implausible landslide victory in a contested presidential election in 2020.

The former director of a Soviet collective pig farm, Mr. Lukashenko has secured his hold on Belarus over nearly three decades by maneuvering adroitly between East and West, playing each side against the other. But in the aftermath of last year’s uprising against him, he has become increasingly dependent on the Kremlin and docile to Mr. Putin.

Some analysts believe it is only a matter of time before pressure from Mr. Putin forces Mr. Lukashenko to take more direct action in the war, pushing him into an existential dilemma. Joining the conflict could undermine his support at home, but if he does not do Mr. Putin’s bidding, the Russian leader could retaliate by taking steps to force him from office.

In the early stages of the war, Belarus allowed Mr. Putin to use its territory for Russian troops to stage a shock-and-awe operation to try to capture Kyiv. The plan failed spectacularly, but with Russia now bogged down in a grinding war of attrition in Ukraine’s east, Moscow would benefit from any help Mr. Lukashenko could provide.

Mr. Lukashenko has proved himself a pliant friend. He has used Belarus’s 600-mile border with Ukraine to help place wooden “dummy tanks” in the woods, creating the illusion of impending danger; to replenish Russia’s arsenal; and to allow Moscow to stage missile strikes from within Belarusian territory.

As part of this weekend’s drills, the Belarusian army has dispatched 3,500 to 4,000 military personnel near the border, according to Oleksandr Motuzyanyk, a spokesman for Ukraine’s Defense Ministry. The entire Belarusian army has about 60,000 troops, he said, although Mr. Lukashenko wants to add another 20,000.

The Belarusian Defense Ministry said its special operation forces would participate in the drills, which will take place in the country’s southeastern Gomel region, whose border is just 65 miles from Kyiv.

While Mr. Lukashenko has made it clear that his loyalties now rest firmly with Mr. Putin, he remains a mercurial leader, known for sometimes unpredictable behavior. Among other things, he has touted ice hockey, vodka, saunas and tractor-driving as remedies for Covid; sent a fighter jet to intercept a European airliner carrying a prominent dissident; and made his generals salute his teenage son.

AUSTIN, Texas--(BUSINESS WIRE)--As the first multifamily management company to be recognized in the Public Relations and Marketing Excellence Awards, … END_OF_DOCUMENT_TOKEN_TO_BE_REPLACED

There have been whispers of cooling housing and rental prices in the San Francisco Bay Area, but that hasn't yet translated into practical, noticeable … END_OF_DOCUMENT_TOKEN_TO_BE_REPLACED

Cars pass in Independence Square at twilight in Kyiv, Ukraine, Monday, Oct. 31, 2022. Rolling ... [+] blackouts are increasing across Ukraine as the … END_OF_DOCUMENT_TOKEN_TO_BE_REPLACED