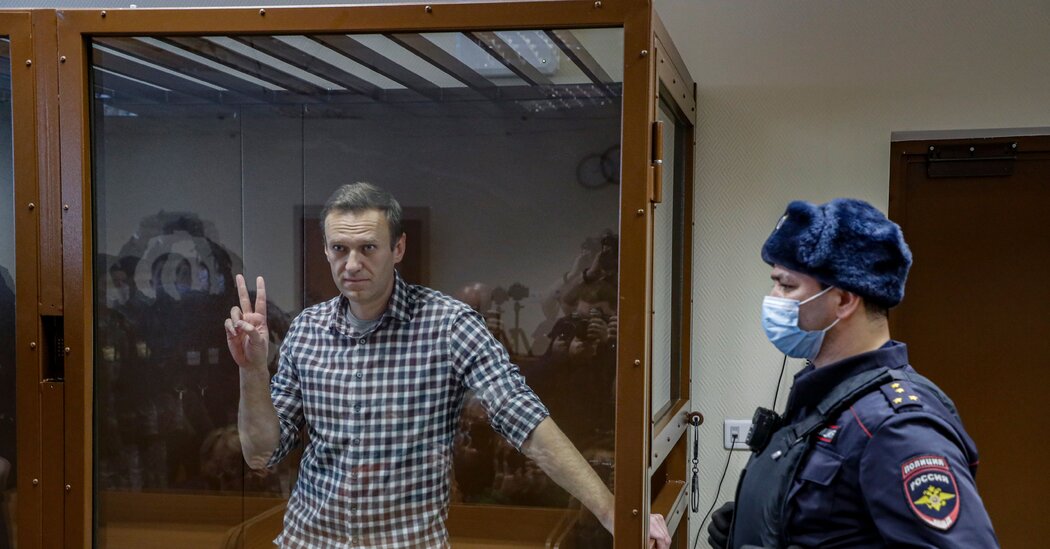 Russia is moving ahead with efforts to outlaw the organization led by the opposition figure Aleksei A. Navalny, a step that could result in the most intense wave of political repression in the post-Soviet era. But supporters of the jailed opposition leader say they are determined to take to the streets.

Opponents of President Vladimir V. Putin have called for protests across Russia on Wednesday in support of Mr. Navalny, whose allies say he is on a hunger strike and near death in a Russian prison. The police are expected to intervene forcefully to break up the protests, which started in the country’s Far East immediately after Mr. Putin delivered his state of the nation speech.

Mr. Putin has rarely mentioned Mr. Navalny by name and did not do so in his speech. He did not refer to him in any way.

Mr. Navalny is insisting that he be allowed to be seen by doctors of his choosing. A lawyer who visited him, Vadim Kobzev, said on Tuesday that Mr. Navalny’s arms were punctured and bruised after three nurses had unsuccessfully tried six times to hook him up to an intravenous drip.

posted to social media. “A skeleton walking, swaying, in its cell.”

The Kremlin depicts Mr. Navalny as an agent of American influence, and Russian prosecutors filed a lawsuit on Friday to declare his organization “extremist” and illegal.

The extremism designation, which a Moscow court will consider in a secret trial starting next week, would effectively force Russia’s most potent opposition movement underground and could result in yearslong prison terms for pro-Navalny activists.

The White House has warned the Russian government that it “will be held accountable” if Mr. Navalny dies in prison. Western officials — and Mr. Navalny’s supporters and allies — reject the idea that he is acting on another country’s behalf.

But in the Kremlin’s logic, Mr. Navalny is a threat to Russian statehood, doing the West’s bidding by undermining Mr. Putin. It is Mr. Putin who is keeping Russia stable by maintaining a balance between competing factions in Russia’s ruling elite, said Dmitri Trenin, the director of the Carnegie Moscow Center.

“If Putin leaves, a battle between different groups breaks out, and Russia withdraws into itself, has no time for the rest of the world and no longer gets in anyone’s way,” Mr. Trenin said. “The West is, of course, using Navalny, and will use him to create problems for Putin and, in the longer term, help Putin become history in one way or another.”

Three men were indicted in the death of the notorious gangster James (Whitey) Bulger, who was beaten to death four years ago in a West Virginia … END_OF_DOCUMENT_TOKEN_TO_BE_REPLACED

Dr. Connolly and Dr. Mott live in the North Baltimore neighborhood of Homeland, known for its strong public schools and colonial architecture, which … END_OF_DOCUMENT_TOKEN_TO_BE_REPLACED