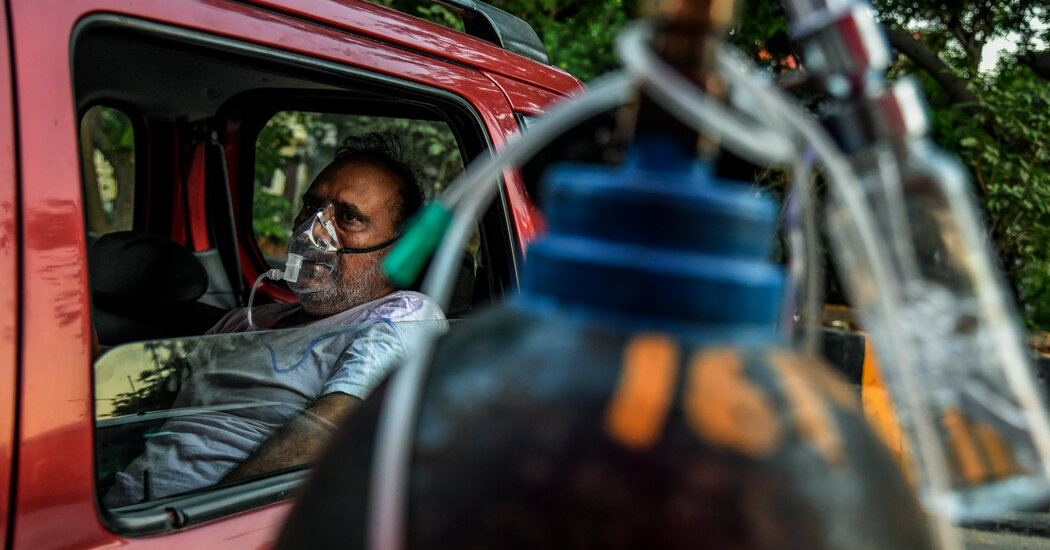 NEW DELHI — Oxygen generators from Saudi Arabia and the United Arab Emirates. Raw material for coronavirus vaccines from the United States. Millions in cash from companies led by Indian-American businessmen.

As a second wave of the pandemic rages in India, the world is coming to the rescue.

But it is unlikely to plug enough holes in India’s sinking health care system to fully stop the deadly crisis that is underway, and the health emergency has global implications for new infections worldwide, as well as for countries relying on India for the AstraZeneca vaccine.

“It’s a desperate situation out there,” said Dr. Ramanan Laxminarayan, the founder and director of the Center for Disease Dynamics, Economics & Policy, adding that donations will be welcome, but may only make a “limited dent on the problem.”

In the early months of 2021, the government of Prime Minister Narendra Modi acted as if the coronavirus battle had been won, holding huge campaign rallies and permitting thousands to gather for a Hindu religious festival.

the devastation in India, continues to break daily records and run rampant in much of the world, even as vaccinations steadily ramp up in wealthy countries. More than one billion shots have now been given globally.

On Sunday, the world’s seven-day average of new cases hit 774,404, according to a New York Times database, higher than the peak average during the last global surge, in January. Despite the number of shots given around the world, far too few of the global population of nearly eight billion have been vaccinated to slow the virus’s steady spread.

Our World in Data project. Only 0.2 percent of doses have been administered in low-income countries.

On Monday, India broke the world record for daily coronavirus infections for a fifth consecutive day, reporting nearly 353,000 new cases. And it added 2,812 deaths to its overall toll of more than 195,000, which experts say may be a vast undercount.

the Serum Institute of India, the world’s largest vaccine maker, made a direct appeal to President Biden on Twitter, asking him to “lift the embargo” on raw material used to make Covid-19 vaccines.

Tim Manning, the White House Covid-19 supply coordinator, said that the U.S. Defense Production Act, which Mr. Biden invoked in March, did not equate to an embargo. “There are literally no export controls, export restrictions on vaccine inputs out of the United States,” Mr. Manning said.

“The challenge,” he said, “what is actually happening globally, is that there is just a dramatically outstripped demand against the infrastructure for supply. And it’s really just that simple.”

Facing increased pressure, the White House said Sunday that it had removed impediments to the export of raw materials for vaccines and would also supply India with therapeutics, test kits, ventilators and personal protective gear.

The Biden administration then said Monday that it would share up to 60 million AstraZeneca doses from its stockpile with other countries in the coming months, so long as they clear a safety review being conducted by the Food and Drug Administration.

The U.S. surgeon general, Dr. Vivek Murthy, who announced the plan on Twitter, did not specify which countries would receive those doses.

Members of Congress had lobbied Mr. Biden to donate the AstraZeneca vaccine to India, since there is no shortage for Americans who want to be vaccinated with the three vaccines that have been authorized for emergency use there.

The extent of support the president offers India could lay the foundation for a Biden-Modi relationship at a time when the United States and China are both jockeying for influence with India and greater access to its enormous market.

Mr. Biden’s response to India at its time of crisis has come under scrutiny, raising questions of how far the administration has actually moved away from former President Donald J. Trump’s “America First” foreign policies.

The Serum Institute did not respond to questions about the White House’s announcement.

Between bouts of the pandemic, when Mr. Modi’s government thought the worst was behind it, India enacted a policy of vaccine diplomacy, selling or donating 66.4 million doses.

The Indian government is now holding back nearly all of the 2.4 million doses produced daily by the Serum Institute, one of the world’s largest producers of the AstraZeneca vaccine. So far, only the U.S. has offered to fill some of the shortage.

Still, vaccine shortages have hobbled India’s effort to protect its people. Only about 2 percent of the population has been fully inoculated.

pledged medical equipment, including 495 oxygen concentrators (devices that can extract oxygen from ambient air and provide it to patients) and 140 ventilators. France and Australia are considering sending oxygen supplies. Even Pakistan, with which India has fought several wars and maintains chilly relations, has offered X-ray machines, ventilators and other aid, its foreign minister, Shah Mahmood Qureshi, said.

Two Indian-American businessmen — the chief executive of Microsoft, Satya Nadella, and the Google chief, Sundar Pichai — have both said that their companies will provide financial assistance to India.

“Devastated to see the worsening Covid crisis in India,” Mr. Pichai wrote on Twitter, pledging $18 million to aid groups working in the country.

tweeted last week about his meeting with Margrethe Vestager, the European Commission executive vice president who oversees digital policy. On Sunday, the European Union announced that it would provide oxygen and medicines

“The E.U. is pooling resources to respond rapidly to India’s request for assistance via the E.U. Civil Protection Mechanism,” Ursula von der Leyen, the president of the European Commission, said on Twitter.

Mr. Jaishankar’s spokesman did not respond to a request for comment on the assistance promised to India, but experts said it could only do so much.

advance purchase agreements for millions of doses of the AstraZeneca vaccine beginning last May, India waited until January, and then only bought 15.5 million doses produced by Serum and the pharmaceutical company Bharat Biotech — a drop in the ocean for a country of nearly 1.4 billion people.

India had indicated as early as last September, at the height of the first wave, that it would rely heavily on Russia’s Sputnik V vaccine, signing a deal to buy 100 million doses. But Sputnik won’t be available in India until next month at the earliest.

If India were to dramatically ramp up its vaccine manufacturing capacity and give emergency authorization to other vaccine makers, it could potentially curb the worst effects of the second wave.

“This is the only long-term solution.” Dr. Laxminarayan said. “India has the capability to do it, if the country puts its mind to it.”

There were no arrests in three quarters of last year’s fatal shootings, according to statistics provided by Mr. Krasner’s office, even as arrests for … END_OF_DOCUMENT_TOKEN_TO_BE_REPLACED