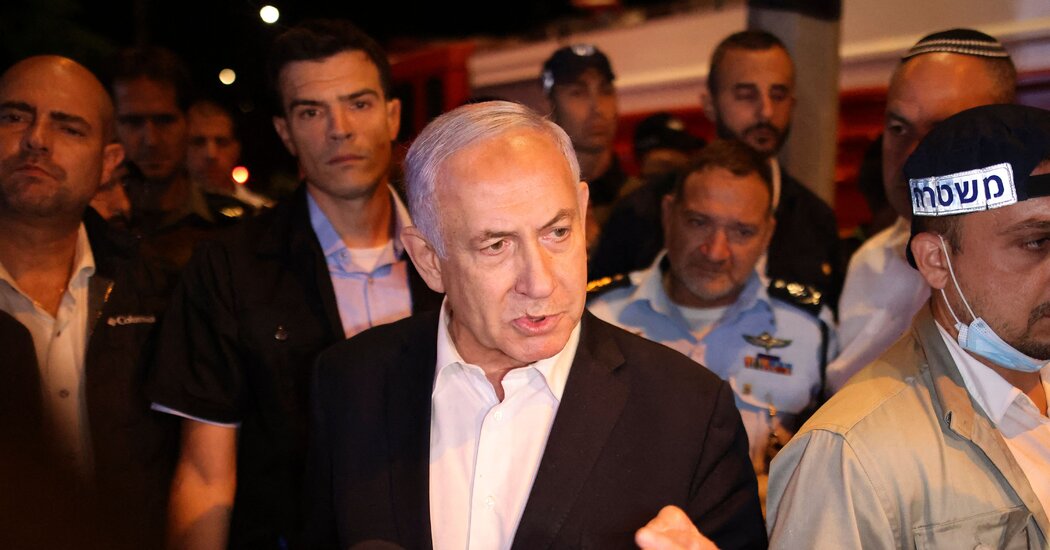 When the country is on the brink of war, the opposition usually rallies around the government.

As the conflict with Gaza wrought more death and destruction on Wednesday — and as an intense surge of Arab-Jewish sectarian violence rocked towns within Israel — a chief opponent of Benjamin Netanyahu blamed the prime minister for the spiraling sense of chaos and said he was working to oust him.

Yair Lapid, the centrist leader of the opposition, said the events of the last week “can be no excuse for keeping Netanyahu and his government in place. Quite the opposite,” Mr. Lapid wrote in a statement he posted on Facebook. “They are exactly the reason why he should be replaced as soon as possible.”

The escalating crisis, in which dozens have been killed in airstrikes and rocket barrages, has come at a pivotal moment in Israeli politics.

standing trial on corruption charges and was unable to form a government after four elections in two years, seemed on the verge of losing power after 12 consecutive years in office.

Mr. Lapid had been given a chance to try his hand at forming a coalition that could command a majority in a vote of confidence in Parliament. His potential coalition partners are a disparate group of small parties with clashing agendas and ideologies, and he has a deadline of June 2 to complete the task.

a small, Arab Islamist party known as Raam that currently holds the balance in Parliament.

Historically, Arab parties played a marginal role in Israeli politics. The mainstream governing parties have been reluctant to rely on Arab votes in Parliament, particularly given Israel’s focus on security issues in a hostile and volatile region. And Arab lawmakers have not been eager to participate in governments and to share responsibility for Israel’s military actions and occupation of the West Bank.

Mr. Abbas had planned to change all that. After negotiations with Mr. Netanyahu failed, he turned to cooperating with Mr. Lapid. Then, as religious and nationalist tensions peaked in Jerusalem over the last week, culminating in the military conflict, Mr. Abbas formally suspended Raam’s participation in coalition talks but has not ruled out supporting an alternative government, in return for benefits for Israel’s Arab minority, which makes up about one-fifth of the population.

“After the fire dies down, there will be no choice but to return to political negotiations to form a government,” Mr. Abbas said on Wednesday in an interview on Israeli public radio’s Arabic service. “We have a real opportunity to fill an important role in Israeli politics for our society.”

Many analysts believe the surging violence between Israelis and Palestinians, and Arabs and Jews, will create new obstacles to Mr. Abbas’s involvement in a coalition. His support for a government that includes right-wing Israelis would become harder for much of his constituency to swallow, and the right-wing flank of the anti-Netanyahu camp would be hard pressed, in this highly charged atmosphere, to form a government reliant on Arab support and to accede to Mr. Abbas’s wish list of concessions for joining the coalition.

Mohammad Darawshe, of the Center for Equality and Shared Society at Givat Haviva, an organization promoting Jewish-Arab relations, said the trend among the Arab parties was “for new political engagement.” But the longer the coalition talks drag on, and the worse the violence becomes, the more the discord between the left, right and Arab flanks of the anti-Netanyahu bloc is likely to increase, he said.

“The polarization is growing,” he said, “not only among the politicians but also among their bases.”

As the conflict intensifies, Mr. Netanyahu has tried to project confidence and dispel the notion that his hold on power is crumbling.

“If someone thought that there wouldn’t be a united, strong and forceful leadership here because of some consideration or other, they were wrong,” he said during a visit on Wednesday to Acre, a mixed Jewish-Arab city in northern Israel where some of the worst ethnic violence has played out. “We are here,” he said. “We are working with all our might to protect Israel from enemies outside and rioters within.”

The crisis could help Mr. Netanyahu win over opponents who had promised during the election campaign not to enter a government led by him, said Mitchell Barak, a Jerusalem-based pollster and political analyst.

“Netanyahu is exactly where he wants to be, in the middle of a major crisis where you don’t want to change the prime minister or the defense minister,” Mr. Barak said.

“No political party or politician will be held accountable now for any campaign promises due to the situation,” Mr. Barak added. “Everything’s wide open.”

One of Mr. Netanyahu’s chief rivals, Benny Gantz, the defense minister in the caretaker government, and a linchpin for any potential alternative coalition, is currently busy supervising the military campaign in Gaza in close coordination with Mr. Netanyahu, his longtime nemesis.

Some analysts speculated that the emergency could help Mr. Netanyahu persuade Mr. Gantz to remain on his side and ultimately help keep him in office.

Under the terms of the coalition agreement reached by the two men last year, during the pandemic crisis, Mr. Gantz had been supposed to take over as prime minister in November. That agreement fell apart over a budget crisis, leading to the election in March, but their coalition remains in place as a caretaker government.

“They have to manage a war together when they couldn’t keep to a coalition agreement or agree on a budget,” said Dahlia Scheindlin, a Tel Aviv-based political consultant and pollster.

But, Ms. Scheindlin added, “The closer we get to full out war, the easier it is to make a legitimate case that you can’t change a government in the middle of war.”

AUSTIN, Texas--(BUSINESS WIRE)--As the first multifamily management company to be recognized in the Public Relations and Marketing Excellence Awards, … END_OF_DOCUMENT_TOKEN_TO_BE_REPLACED

There have been whispers of cooling housing and rental prices in the San Francisco Bay Area, but that hasn't yet translated into practical, noticeable … END_OF_DOCUMENT_TOKEN_TO_BE_REPLACED

Cars pass in Independence Square at twilight in Kyiv, Ukraine, Monday, Oct. 31, 2022. Rolling ... [+] blackouts are increasing across Ukraine as the … END_OF_DOCUMENT_TOKEN_TO_BE_REPLACED