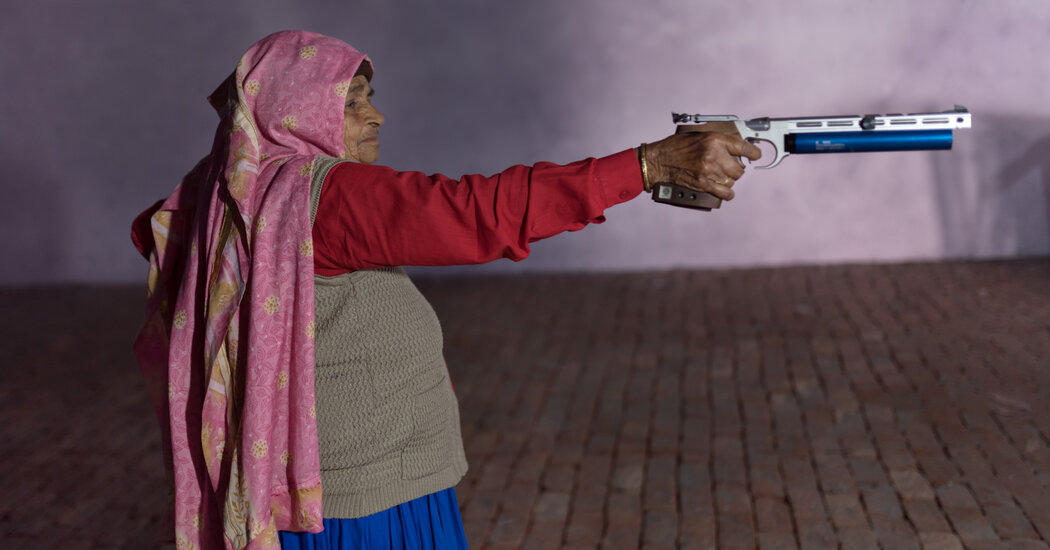 Gun laws in India are strict and weapons prohibitively expensive, since most are imported. Only members of royal families and people with military backgrounds had any experience with sport shooting at the time.

The region that is home to Ms. Tomar’s village, Johri, is mostly rural, with acres of sugar cane fields and a few brick kilns. There were hardly any jobs, crime rates were high and poverty was endemic.

In 1999, Johri got its first shooting range. It was fairly rudimentary, and the guns were air pistols, which use pellets rather than bullets, rather than actual firearms. But its founders, Rajpal Singh and Farooq Pathan, said they believed that teaching young children to shoot could provide valuable skills and help discover talent.

Trying to drum up interest, they held a contest and gave away 50 air guns as prizes, said Mr. Pathan, who comes from a family of professional shooters and is now a shooting coach with the Sports Authority of India. “The air guns motivated the kids to come and try the sport,” he said.

Ms. Tomar took her granddaughter Shefali to the range one day. They were the only women or girls there, and Shefali, who was 12, felt nervous handling a gun. Watching the girl fumble, Ms. Tomar stepped in. “I told her, ‘Why are you so nervous? Just watch me,’” she recalled. “I picked up the gun, loaded it and fired. It hit the bull’s-eye.”

It was the first time she had ever picked up a gun.

Mr. Pathan was impressed but figured that the shot was a fluke, she said. “So I fired another shot and hit the target again, right next to the center.”

DALLAS — The rollback of abortion rights has been received by many American women with a sense of shock and fear, and warnings about an ominous … END_OF_DOCUMENT_TOKEN_TO_BE_REPLACED

The poshest place in California's Coachella Valley is The Madison Club. This exclusive gated community in La Quinta is where A-listers and tycoons … END_OF_DOCUMENT_TOKEN_TO_BE_REPLACED