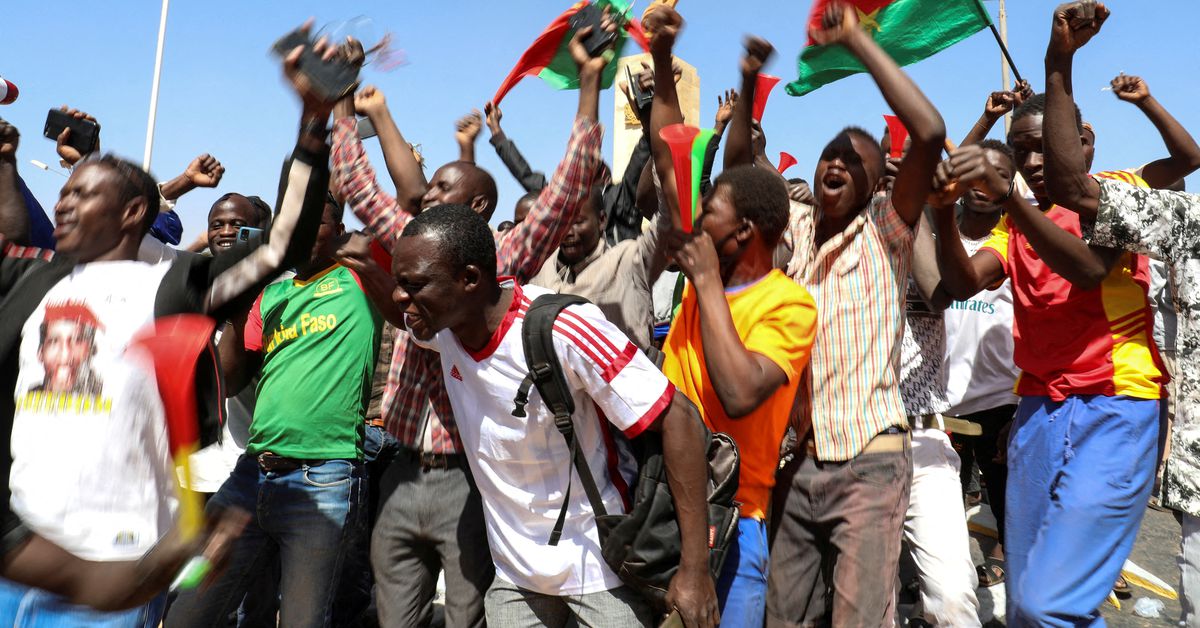 DAKAR, Jan 26 (Reuters) – Earlier this month, West African countries slapped tough economic sanctions on Mali to punish coup leaders seeking to extend their hold on power, and to halt a run of military takeovers that have beset the region since 2020.

Burkina Faso’s military did not get the message. On Monday, two weeks after the 15-member Economic Community of West African States (ECOWAS) announced the sanctions, the Burkinabe army arrested President Roch Kabore and seized power.

As the international community condemned West Africa’s fourth coup in 18 months, crowds in the capital Ouagadougou cheered the Burkinabe army – a contrast to anti-coup protests that erupted when the military briefly seized power in 2015.

The reaction echoed scenes in Mali and Guinea, whose coup leaders received warm welcomes at home.

West African nations and international allies have struggled to mount an effective response, as populations lose faith in governments many see as manipulating the democratic process and unable to alleviate poverty or repel Islamist militant violence.

The problems pre-date recent coups. Unlike its vocal opposition to military takeovers, ECOWAS remained silent as sitting presidents maintained their grip on power by extending terms under what critics call “constitutional coups”.

“Today, ECOWAS is not a credible institution to people,” said Abdoulaye Barry, a Burkinabe researcher at the United Nations’ University for Peace.

“As long as they are not going to offer adequate responses to the governance deficit, coups are going to multiply.”

An ECOWAS spokesperson was not available to comment on its track record.

Other countries, including France and European allies, have maintained a military presence in the region, and partner local armed forces to fight groups like al Qaeda and Islamic State, meaning military support continues despite criticism of coups.

France in particular has deployed thousands of troops to West Africa’s Sahel region over the past decade, but security has progressively deteriorated, fuelling anti-French sentiment.

The sanctions and international condemnations have arguably bolstered coup leaders’ standing at home.

Mali’s military-led transitional government, which took power in an August 2020 coup, went back on a commitment to hold elections next month. Instead, it proposed to rule for another four years.

Although the pain caused by rising food prices and shortages could yet turn people against the authorities, forcing the junta to the negotiating table, for now sanctions appear to be having the opposite effect.

Protests against the sanctions, which even some critics of the junta criticise as draconian, drew tens of thousands into the streets. People held signs that read: “Down with ECOWAS” and “Down with France”.

France and its Western allies say many of these trainers are mercenaries from a private military contractor under European Union sanctions. Malian authorities deny this.

“Coalitions outside the traditional U.N. structures are emerging and staking a claim to security and economic partnerships in Africa,” a West African diplomat said, citing Russia, China, Turkey and the Gulf States.

On Tuesday, Alexander Ivanov, the official representative of Russian military trainers in Central African Republic, issued a statement on the situation in Burkina Faso.

“I believe that if Russian instructors are invited to train the Burkina Faso army, they will be able to do so effectively,” Ivanov said.

The new Burkinabe authorities have not commented on any potential Russian deployment. At the pro-coup rally on Tuesday, some in the crowd held Russian flags.

When ECOWAS ordered member states to close borders with Mali, Guinea said it would not comply, allowing continued access to the port of Conakry. The junta in Burkina Faso, which also borders Mali, has not yet said if it will do the same.

Nearly 30% of Mali’s trade is with ECOWAS member states, according to U.N. data, and food prices are starting to rise in the capital Bamako, residents say.

But diplomats and analysts said the influence of ECOWAS and foreign powers traditionally active in the region has been hampered by eroding credibility.

Some traced that back to 2015, when the bloc came close to banning presidential third terms after Burkina Faso’s veteran leader Blaise Compaore was ousted the previous year in an uprising sparked by his efforts to extend his time in office.

Such a move would have been a first for an African regional body, but it never happened.

ECOWAS was silent in 2020 as the presidents of Guinea and Ivory Coast won third terms after altering constitutions that barred them from running again.

“ECOWAS needs to address the root causes of the recent coups … including the situations where governments manipulate the constitutions to remain in power,” said Said Djinnit, the former commissioner for peace and security at the African Union and top U.N. diplomat in West Africa.

Anger over Guinean President Alpha Conde’s third term was one of the reasons the military cited when it overthrew him last September.

Guinea’s ruling junta has promised to oversee a transition back to democracy but has declined to set a date for elections. ECOWAS has imposed targeted sanctions against junta members and their families.

Reporting by Aaron Ross in Dakar and David Lewis in Nairobi; Editing by Edward McAllister and Mike Collett-White

Listed on April 21 for $2,395,000 with Adam Weissman of Coldwell Banker Bain of Lake Union, the gorgeous four-bedroom brick home was sold on May 6 for … END_OF_DOCUMENT_TOKEN_TO_BE_REPLACED