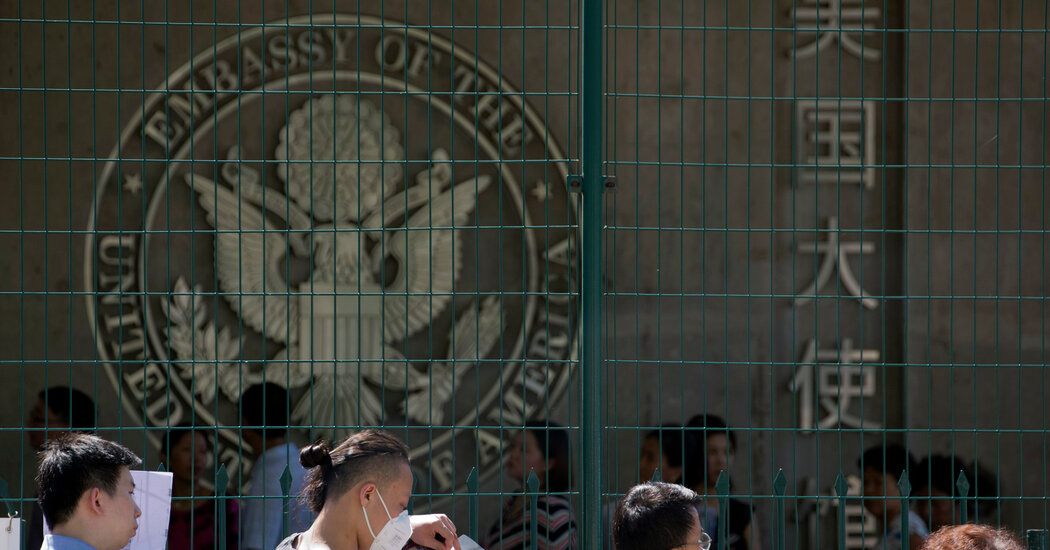 HONG KONG — The U.S. Embassy in Beijing had good news to share: Student visa applications for Chinese nationals were resuming after a yearlong hiatus.

“Spring has come and the flowers are in bloom,” the embassy wrote in a Chinese-language social media post on Wednesday that included a video of a dog trying to jump over a fence. “Are you like this doggy who can’t wait to go out and play?”

The post on Weibo, a Twitter-like platform in China, could be read as a ham-handed attempt to be cute. But at a moment of heightened nationalism on the Chinese internet, it set off criticism — and accusations of racism — that were amplified by the ruling Communist Party’s formidable propaganda machine.

The embassy quickly removed the post and apologized, but the damage was done. The spat is the latest thorn in a diplomatic relationship that is prickly at the best of times and has lately been at its most delicate point in decades.

Fang Kecheng, a professor of journalism and communication at the Chinese University of Hong Kong, said the response was a typical example of how nationalistic news outlets and social media users in China wage “public opinion warfare.”

“They pay close attention to what the U.S. government and media say, and amplify any inappropriate expressions to discredit them,” he said.

Professor Fang said that such campaigns sometimes drew attention to statements that he said deserved to be criticized, such as Mr. Trump’s use of the term “China virus” to describe the coronavirus. That phrase has been widely criticized in the United States and beyond as racist and anti-Chinese.

“In this case, it’s amplifying a misstep,” he added, referring to the embassy’s social media post.

technology Cold War, among other issues. Travel between the two counties has largely been frozen by strict visa controls, a result of both Covid-19 protocols and souring relations. Even attempts to restore diplomatic normalcy have been fraught.

There are potential financial implications for the U.S. education sector, too.

About a million international students enroll in American universities every year. More than a third were from China in the 2019-2020 academic year, according to data compiled by the Institute of International Education.

But experts say that universities in the United States and other English-speaking countries could lose billions of dollars in the coming years because of travel restrictions and anger among Chinese students and parents about what they see as a permissive attitude toward public health during the pandemic.

abandoned a plan to strip international college students of their visas if they did not attend at least some classes in person. Harvard, the Massachusetts Institute of Technology and attorneys general of 20 states had sued over the proposed policy, saying it was reckless, cruel and senseless.

America is absorbing the shock of another bloody mass shooting, a day after an 18-year-old man wearing body armour and carrying assault rifles entered … END_OF_DOCUMENT_TOKEN_TO_BE_REPLACED

Once home to baseball Hall of Famer Ty Cobb, this estate rests on the eastern shores of Lake Tahoe. Now, 1472 Flowers Ave. is on the market asking … END_OF_DOCUMENT_TOKEN_TO_BE_REPLACED