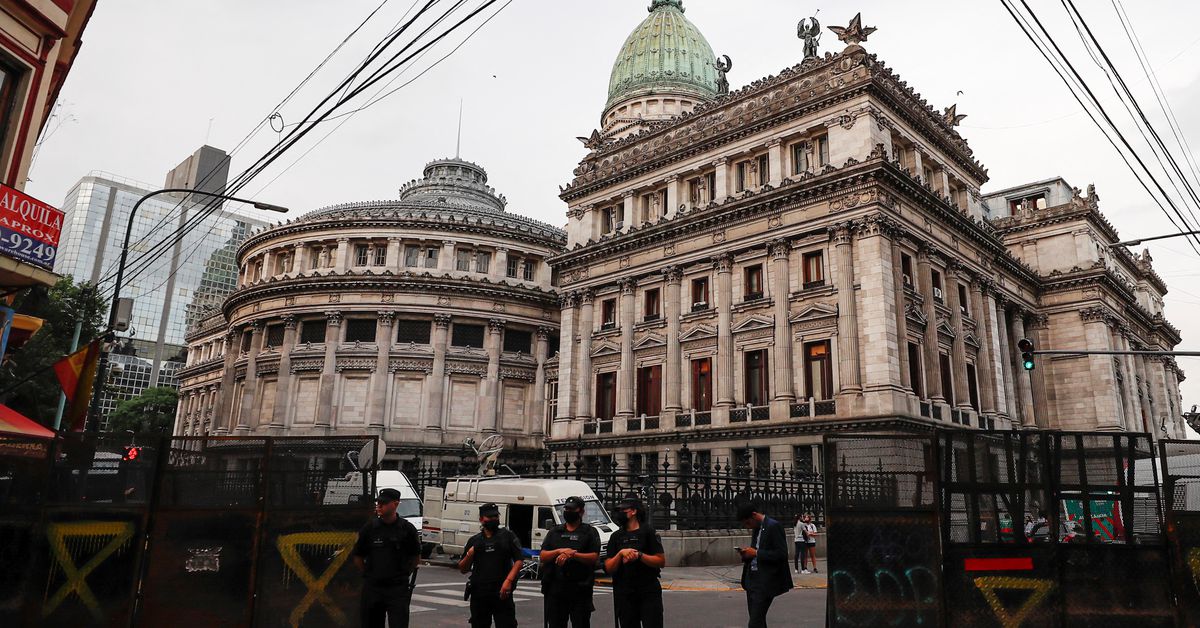 Police officers stand in front of the National Congress as the senate debates the government’s agreement with the International Monetary Fund (IMF), in Buenos Aires, Argentina March 17, 2022. REUTERS/Agustin Marcarian

BUENOS AIRES, March 17 (Reuters) – Argentina’s Senate voted late on Thursday to approve a $45 billion debt deal with the International Monetary Fund (IMF), converting the agreement into law and ensuring that the economically battered country can avoid another messy default.

After an extended debate, the IMF debt restructuring deal backed by President Alberto Fernandez was passed with 56 senators voting in favor, 13 against, along with three abstentions.

The South American country’s center-left Peronist government led by Fernandez struck a staff-level agreement with the international lender at the beginning of March, which was then approved last week by the Chamber of Deputies.

It now needs to be signed off by the IMF board.

The deal lays out a fresh schedule of financing over a 30-month period to replace a failed $57 billion program from 2018 that the grains-producing country was unable to pay back after years of recession, spiraling inflation and capital flight.

It garnered broad support from the center-right opposition, though some ruling party lawmakers have opposed it citing the economic strings attached, which include reducing the fiscal deficit, raising interest rates and cutting energy subsidies.

“This agreement will allow us to accumulate reserves, which will favor Argentina’s exchanges with the world and will allow sustained growth,” Senator Sandra Mendoza, from the ruling Peronists, said during the debate.

Roberto Basualdo, a senator from the opposition alliance Together for Change, told Reuters earlier in the day that approving the deal was key to any future economic expansion.

“We need to grow and the only way to grow is to be in international markets,” he said.

Many lawmakers stressed that the vote removes the worst-case scenario for near-term economic prospects.

“By approving this agreement we are prioritizing the interests of the Argentine republic by preventing default,” said Senator Jose Torello, of the opposition alliance.

Fernandez wants a quick approval of the agreement ahead of a $2.8 billion payment due to the IMF at the beginning of next week and billions more later this year. The new program would see repayments made between 2026 and 2034.

The Seattle Seahawks are very much still in the running for Baker Mayfield. (Photo by Stacy ... [+] Revere/Getty Images) Getty Images The Seattle … END_OF_DOCUMENT_TOKEN_TO_BE_REPLACED

(CNN) — Kim Kyung-seop recalls going to cheap bars after class with his friends, where they binged on as much makgeolli as possible. "You know the … END_OF_DOCUMENT_TOKEN_TO_BE_REPLACED