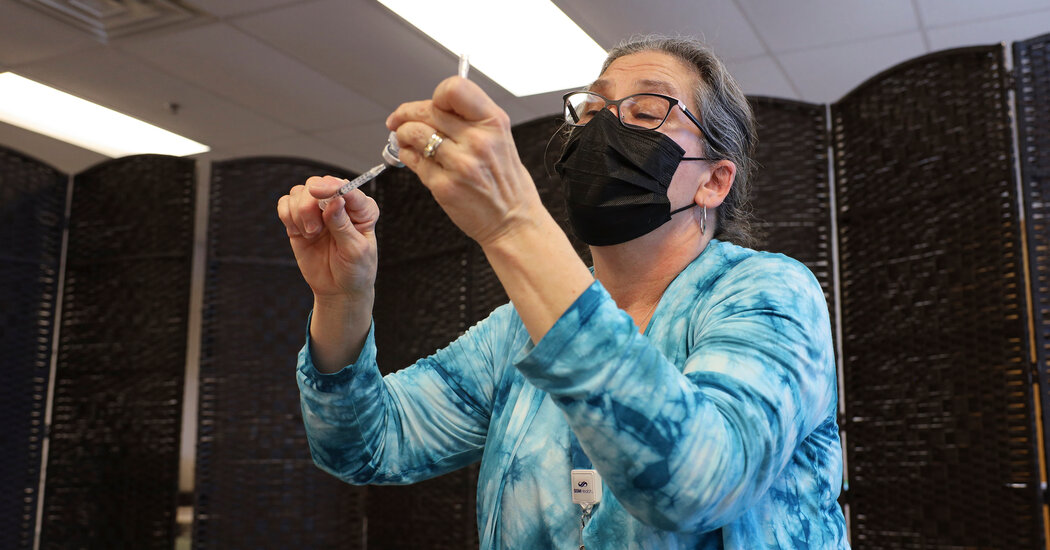 Gov. Asa Hutchinson, Republican of Arkansas, said those residents would be eligible to be vaccinated as of Tuesday and lifted the state’s mask requirements, despite an urgent call from President Biden the day before for states to keep or reimpose mask mandates, even as vaccinations increase. Wisconsin’s eligibility change goes into effect on Monday and Delaware’s on Tuesday.

Ending the mask mandate in Arkansas was “appropriate” Mr. Hutchinson said, who said that new virus cases and hospitalizations had decreased across the state. While there will no longer be a mandate, Mr. Hutchinson still urged people to continue to wear masks. “It’s important to be courteous to others and to be mindful that we need to protect ourselves and others,” he said at a news conference on Tuesday.

In Arkansas and other states, cases and hospitalizations have been declining. But the number of new virus cases has been slowly mounting across the country, including in Delaware and Wisconsin. This is adding pressure to getting more Americans vaccinated before worrisome variants spread into a possible fourth surge. In what they see as a race against time, federal health officials have been asking states not to lift restrictions prematurely.

weeks of decline earlier this year, followed by a plateau, new virus cases are rising again, with a nearly 19 percent rise on Monday compared with the number of cases two weeks earlier, according to a New York Times database.

Similar upticks in the past have led to major surges in the spread of the virus. Still, new cases and deaths have declined from the early January peak. The seven-day average of new deaths remains near 1,000 a day, and the nation surpassed 550,000 virus deaths in total on Tuesday, according to The Times database.

Federal health officials are pleading with Americans to stay vigilant, warning of a potential fourth surge as some states, like Arkansas, Texas and Florida, relax or eliminate virus restrictions.

Health officials are also concerned about variants like the one that walloped Britain, called B.1.1.7, which has led to a new wave of cases across most of Europe. The United States remains behind in its attempts to track them, though the Centers for Disease Control and Prevention’s efforts to locate them has recently improved and will continue to grow.

Some scientists predicted weeks ago that the number of infections could curve upward again in late March, at least in part because of the rise of variants of the coronavirus across the country. The B.1.1.7 variant isrising exponentially in Florida where it accounts for a greater proportion of total cases than in any other state, according to numbers collected by the C.D.C.

Hours before Mr. Biden’s warnings on Monday, Dr. Rochelle Walensky, the director of the C.D.C., was emotional as she spoke during a news briefing. She said that while the nation had “so much reason for hope,” she could not shake the recurring feeling of “impending doom.”

“While we have so much hope on the horizon, we are just asking you to hang on just a little bit longer. Wear your masks, continue to distance and do the things that keep you safe,” Dr. Walensky said on Tuesday during a news conference at a vaccination site in Massachusetts, reiterating the pleas she made a day earlier.

Dr. Walensky’s remarks have come at a striking moment when there has been optimism about the availability and effectiveness of vaccines. Three dozen states are set to open eligibility to the general public by mid-April, well before Mr. Biden’s earlier pledge of May 1.

More than one in three American adults have received at least one shot and nearly one-fifth are fully vaccinated, but the nation is a long way from reaching so-called herd immunity, the tipping point that comes when the spread of a virus begins to slow because enough people, estimated at 70 to 90 percent of the population, are immune to it.

“We continue to be at war with the virus,” the White House press secretary, Jen Psaki, said Tuesday during a news conference. As cases increase, Ms. Psaki said, the Biden administration responds in kind. She pointed the efforts to broaden vaccine eligibility across the country and increasing vaccine supplies to states.

The president on Monday pledged to have vaccination sites within five minutes from where 90 percent of adult Americans live. To do this, Ms. Psaki said, the administration is adding another 23,000 pharmacies with vaccines to the federal pharmacy program, in addition to the 17,000 pharmacies that have already been getting vaccines. She said governors were told on Tuesday that another 33 million vaccine doses will be allocated to different jurisdictions and programs.

“We know that the more people who can get vaccinated, the more accessible it is, the more effective we are going to be. And that’s where we’re putting our efforts,” Ms. Psaki said.

The poshest place in California's Coachella Valley is The Madison Club. This exclusive gated community in La Quinta is where A-listers and tycoons … END_OF_DOCUMENT_TOKEN_TO_BE_REPLACED

KOROPY, Ukraine — Four men tugged at long strips of fabric to lift a coffin out of the gaping hole in the backyard of a small house. They flung the … END_OF_DOCUMENT_TOKEN_TO_BE_REPLACED