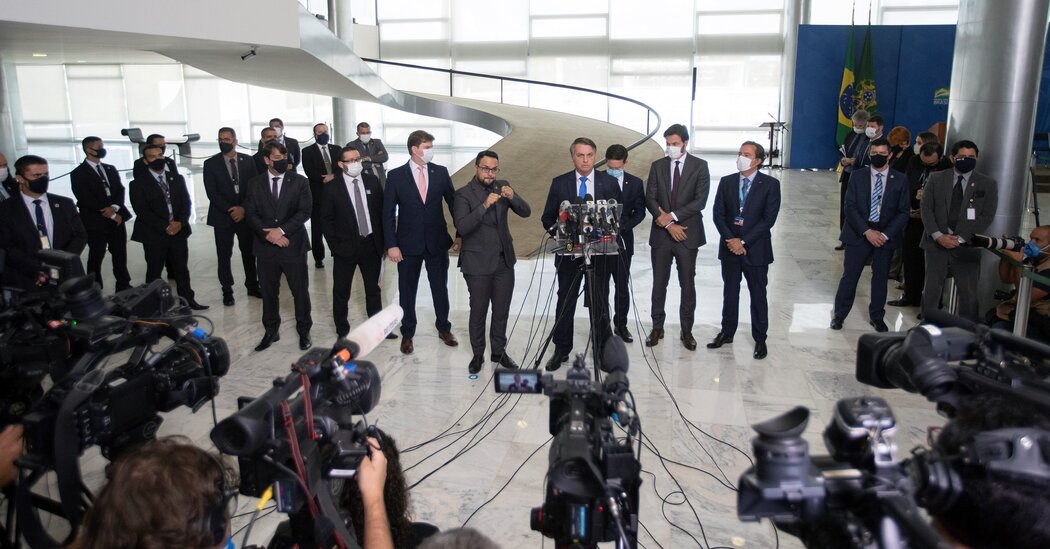 RIO DE JANEIRO — He has sneered at the Covid-19 pandemic, even as it led Brazil’s health care system to collapse. He has ridiculed opposition lawmakers, who are gunning for his impeachment.

His main rival is back in the political arena, threatening a re-election bid.

And this week he ordered a sweeping cabinet shake-up and removed the heads of the armed forces — a strong base of support — with no public explanation.

Even for a polarizing leader who often appears to act on gut instinct, the recent moves by President Jair Bolsonaro of Brazil have confounded and unnerved many in Latin America’s largest country, where the coronavirus is killing people at a record rate.

Brazilian lawmakers on Wednesday presented a new initiative to impeach Mr. Bolsonaro, calling his dismissal of the military commanders the day before a dangerous and destabilizing action.

forcing out of the military commanders, which followed the replacement of roughly one-third of his cabinet, created consternation and bewilderment in political circles. There were no clear signs that the personnel changes represent a strategic shift for the government as it navigates the deadliest phase of the Covid-19 pandemic, which has killed more than 317,000 Brazilians.

With hospitals overloaded, a slow vaccination campaign and growing unemployment, Mr. Bolsonaro is under enormous pressure to make bold policy changes. But politicians and analysts said they were struggling to make sense of his latest moves.

the 11.6 percent jobless rate Mr. Bolsonaro inherited when he took office in January 2019. A formidable political adversary, former President Luiz Inácio Lula da Silva, re-emerged on the political stage this month after the courts vacated corruption cases against him, which restored his right to run for office.

The president confronts daunting economic obstacles. While he was able to retain considerable political support last year by spending billions on a pandemic welfare program, continuing to keep the politically popular assistance aid flowing, while meeting other fiscal obligations, would burst spending caps codified by law.

At the same time, Brazil’s Covid-19 crisis has turned the country into an international pariah. Experts fear that the spread of the country’s more-contagious strain will accelerate across the globe, and that as transmission grows, new variants may yet emerge.

recorded 3,780 daily deaths, a record, Mr. Bolsonaro renewed his attacks on lockdowns and other rigid measures that health experts have said are necessary to arrest the spread of the virus.

issued a joint statement warning that three decades after the end of the dictatorship, “Brazil’s democracy is threatened.”

The statement added: “There is no shortage of examples of the way authoritarianism can emerge from the shadows if societies are careless and fail to speak up in defense of democratic values.”

The new defense minister, Walter Souza Braga Netto, a former Army general who left active duty last year, rattled critics of the government by issuing a statement about the anniversary of the 1964 coup — the anniversary was Wednesday — saying the date should be “celebrated.”

But later in the day, he called today’s armed forces a bedrock of Brazil’s democracy. “On this historic day, I reaffirm that the most valuable asset of a nation is the preservation of democracy and the freedom of its people,” he said during a ceremony in which the three new chiefs of the armed forces were announced.

Lawmakers have called for Mr. Bolsonaro’s impeachment dozens of times since last year, but they have failed to garner broad support. Arthur Lira, the new leader of the House of Representatives, last week put the president on notice as he decried the government’s handling of the pandemic.

Mr. Lira warned that the “political remedies in Congress are well known and all of them are bitter.” Some, he added in a clear reference to impeachment, are “fatal.”

A group of lawmakers last week warned Mr. Bolsonaro in a letter that the 2021 budget, as currently drafted, would exceed fiscal limits established in 2016 to rein in public spending and attract foreign investment. Exceeding the cap, which economists say appears all but inevitable now, would open a new avenue for the president’s impeachment.

“We’re on a path of fiscal irresponsibility and that creates a serious legal problem,” said Zeina Latif, an economist.

But analysts and leading lawmakers say there is little appetite for a new impeachment, given how the ouster of President Dilma Rousseff in 2016 proved so politically disruptive and divisive.

Monica de Bolle, a senior fellow at the Peterson Institute for International Economics, said powerful blocks of lawmakers are likely to use Mr. Bolsonaro’s isolation to extract concessions.

“It’s in their best interest to leave him in office and get the things they always wanted,” she said. She predicted the president’s popularity would fall ahead of next year’s presidential election. “Next year they wash their hands of Bolsonaro.”

MIAMI--(BUSINESS WIRE)--Intelli Smart Homes, the leading smart home technology company, has been recognized as one of America’s fastest-growing … END_OF_DOCUMENT_TOKEN_TO_BE_REPLACED

Customers outside a Walmart store in Torrance, California, US, on Sunday, May 15, 2022. Walmart Inc. is scheduled to release earnings figures on May … END_OF_DOCUMENT_TOKEN_TO_BE_REPLACED

The past few years have been brutal on homebuyers' budgets. Would-be buyers have been priced out of some of the most desirable neighborhoods thanks to … END_OF_DOCUMENT_TOKEN_TO_BE_REPLACED