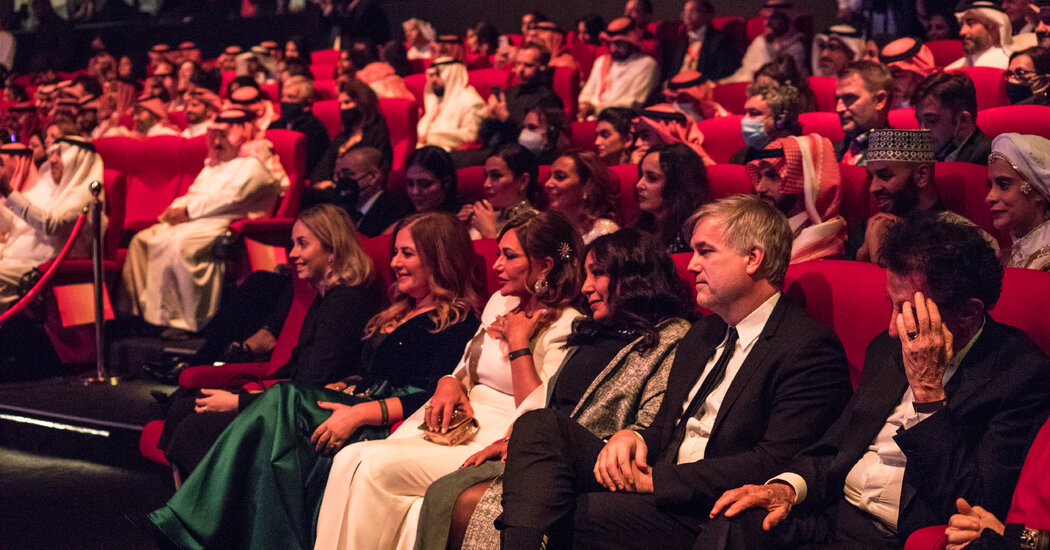 JEDDAH, Saudi Arabia — A pregnant Saudi woman, far from home, finds herself stalked by inner and outer demons. A wannabe Saudi vlogger and his friends, menaced by the internet’s insatiable appetite for content and more mysterious dangers, try to escape a dark forest. At a wedding, the mother of the bride panics when her daughter disappears with all of their guests waiting downstairs.

These were just a few of the 27 Saudi-made films premiering this month at a film festival in Jeddah, part of the conservative kingdom’s huge effort to transform itself from a cultural backwater into a cinematic powerhouse in the Middle East.

The Saudi push reflects profound shifts in the creative industries across the Arab world. Over the past century, while the name Saudi Arabia conjured little more than oil, desert and Islam, Cairo, Beirut, Damascus and Baghdad stood out as the Arab cultural beacons where blockbuster movies were made, chart-topping songs were recorded and books that got intellectuals talking hit the shelves.

In many ways, the region’s cultural mantle is up for grabs, and Saudi Arabia is spending lavishly to seize it.

At the Red Sea International Film Festival, held on a former execution ground, Jeddah residents rubbernecked as stars like Hilary Swank and Naomi Campbell strutted down a red carpet in revealing gowns, and Saudi influencers D.J.-ed at dance parties.

All this in a country where, until a few years ago, women were not allowed to drive, cinemas were banned and aspiring filmmakers often had to dodge the religious police to shoot in public.

Although Saudi Arabia’s population is about a fifth of Egypt’s, the Saudis are more affluent and wired, making them more likely to pay for streaming services and movie tickets. At about $18, a ticket in Saudi theaters is among the most expensive in the world.

But the kingdom only allowed cinemas to reopen only in 2018 after a 35-year ban. Before that, Saudis escaped to nearby Bahrain or Dubai to go to theaters.

Now, the country has 430 screens and counting, making it the fastest-growing market in the world, with a target of 2,600 screens by 2030, Mr. Abdulmajeed said.

Several Saudi-Egyptian collaborations are in the works, and an Egyptian “Hangover”-style comedy, “Wa’afet Reggala” (“A Stand Worthy of Men”), was the highest-grossing release in Saudi Arabia this year, beating the Hollywood blockbusters.

Saudi productions may also continue to draw acting, writing and directing talent from Lebanon, Syria and Egypt — and will most likely need to do so to reach non-Saudi audiences, said Rebecca Joubin, an Arab studies professor at Davidson College in North Carolina.

Five Movies to Watch This Winter

“With Saudi opening up, they say in Egypt that it’s saving Egypt’s movie industry,” said Marwan Mokbel, an Egyptian who co-wrote “Junoon,” the Saudi horror film about the vlogger that premiered at the Jeddah festival.

That has created a big market for Arabic-language content.

Netflix has produced Jordanian, Egyptian and Syrian-Lebanese shows, with varying degrees of success, and just announced the release of its first Arabic-language feature film, “Perfect Strangers.”

Syrian and Lebanese studios that used to depend on gulf financiers — who, they complained, often forced them to water down their artistic ambitions by nixing political themes — are also turning to web series and Netflix for new funding and wider audiences.

a hip alternative to the somnolent broadcast television. Mohammad Makki recalled dodging the police, guerrilla style, to film the first season of his show “Takki,” about a group of Saudi friends navigating Saudi social constraints, a decade ago. Then, it was a low-budget YouTube series. Now, it is a Netflix hit.

“We grew up dying to go to the cinema,” he said, “and now it’s two blocks from my house.”

Saudi women in the industry faced even greater challenges.

When “Wadjda” (2012), the first Saudi feature directed by a woman, was filmed, Haifaa al-Mansour, the director, was barred from mixing in public with male crew members. She worked instead from the back of a van, communicating with the actors via walkie-talkie.

“I’m still in shock,” said Ahd Kamel, who played a conservative teacher in “Wadjda,” which portrays a rebellious young Saudi girl who desperately wants a bicycle, as she walked through the festival. “It’s surreal.”

As a young actress in New York, Ms. Kamel hid her career from her family, knowing they, and Saudi society, would not approve of a woman acting. Now, she said, her family pesters her for festival tickets, and she is preparing to direct a new film to be shot in Saudi Arabia.

Marvel’s big-budget “Eternals” was not released in Saudi Arabia — or in Qatar, Kuwait or Egypt — because of gay romantic scenes. Several of the non-Saudi films screened at the Jeddah festival, however, included gay scenes, nudity and an out-of-wedlock pregnancy.

Hisham Fageeh, a Saudi comedian and actor, said officials had told him future films should avoid touching directly on God or politics.

But the filmmakers said they were just happy to have support, accepting that it would come at the price of creative constraints.

“I don’t intend to provoke to provoke. The purpose of cinema is to tease. Cinema doesn’t have to be didactic,” said Fatima al-Banawi, a Saudi actress and director whose first feature film the festival is funding. “It comes naturally. We’ve been so good at working around things for so long.”

AUSTIN, Texas--(BUSINESS WIRE)--As the first multifamily management company to be recognized in the Public Relations and Marketing Excellence Awards, … END_OF_DOCUMENT_TOKEN_TO_BE_REPLACED

There have been whispers of cooling housing and rental prices in the San Francisco Bay Area, but that hasn't yet translated into practical, noticeable … END_OF_DOCUMENT_TOKEN_TO_BE_REPLACED

Cars pass in Independence Square at twilight in Kyiv, Ukraine, Monday, Oct. 31, 2022. Rolling ... [+] blackouts are increasing across Ukraine as the … END_OF_DOCUMENT_TOKEN_TO_BE_REPLACED