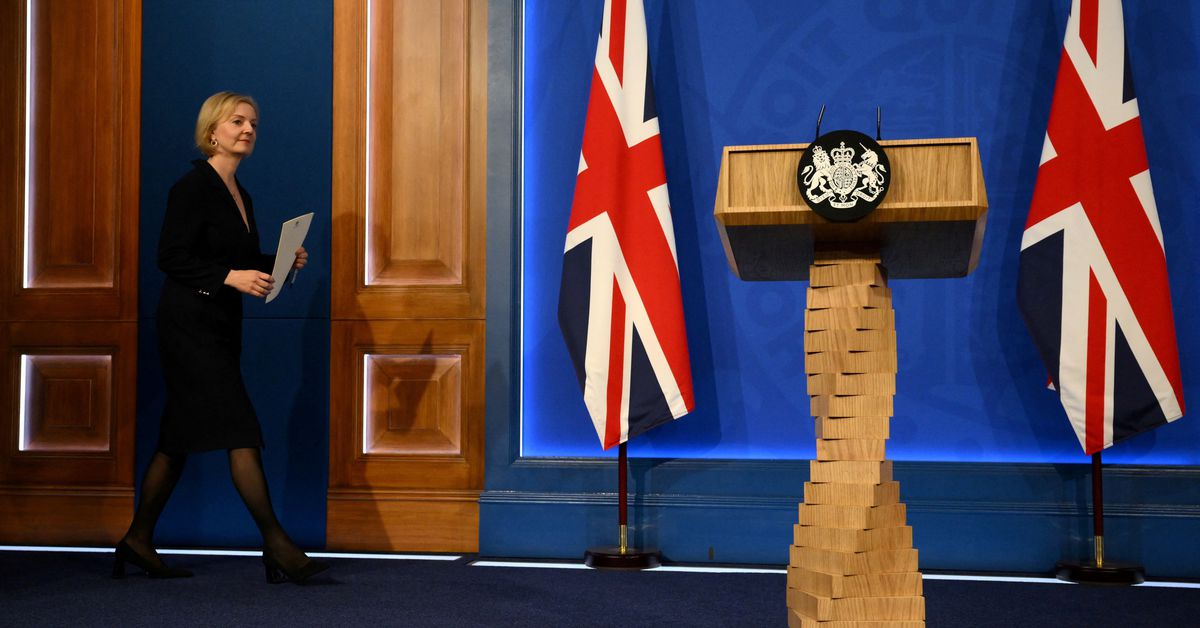 LONDON, Oct 15 (Reuters) – Britain’s new finance minister Jeremy Hunt said on Saturday some taxes would go up and tough spending decisions were needed, saying Prime Minister Liz Truss had made mistakes as she battles to keep her job just over a month into her term.

In an attempt to appease financial markets that have been in turmoil for three weeks, Truss fired Kwasi Kwarteng as her chancellor of the exchequer on Friday and scrapped parts of their controversial economic package.

With opinion poll ratings dire for both the ruling Conservative Party and the prime minister personally, and many of her own lawmakers asking, not if, but how Truss should be removed, Truss is relying on Hunt to help salvage her premiership less than 40 days after taking office.

In an article for the Sun newspaper published late on Saturday, Truss admitted the plans had gone “further and faster than the markets were expecting”.

“I’ve listened, I get it,” she wrote. “We cannot pave the way to a low-tax, high-growth economy without maintaining the confidence of the markets in our commitment to sound money.”

She said Hunt would lay out at the end of the month the plan to get national debt down “over the medium term”.

But, the speculation about her future shows no sign of diminishing, with Sunday’s newspapers rife with stories that allies of Rishi Sunak, another former finance minister who she beat to become leader last month, were plotting to force her out within weeks.

On a tour of TV and radio studios, Hunt gave a blunt assessment of the situation the country faced, saying Truss and Kwarteng had made mistakes and further changes to her plans were possible.

“We will have some very difficult decisions ahead,” he said.”The thing that people want, the markets want, the country needs now, is stability.”

The Sunday Times said Hunt would rip up more of Truss’s original package by delaying a planned cut to the basic rate of income tax as part of a desperate bid to balance the books.

According to the newspaper, Britain’s independent fiscal watchdog had said in a draft forecast there could be a 72 billion pound ($80 billion) black hole in public finances by 2027/28, worse than economists had forecast.

Truss had won the leadership contest to replace Boris Johnson on a platform of big tax cuts to stimulate growth, which Kwarteng duly announced last month. But the absence of any details of how the cuts would be funded sent the markets into meltdown.

She has already ditched plans to cut tax for high earners, and said a levy on business would increase, abandoning her proposal to keep it at current levels. But a slump in bond prices after her news conference on Friday still suggested she had not gone far enough.

Kwarteng’s Sept. 23 fiscal statement prompted a backlash in financial markets that was so ferocious the Bank of England (BoE) had to intervene to prevent pension funds being caught up in the chaos as borrowing costs surged.

BoE Governor Andrew Bailey said he had spoken to Hunt and they had agreed on the need to repair the public finances.

“There was a very clear and immediate meeting of minds between us about the importance of fiscal sustainability and the importance of taking measures to do that,” Bailey said in Washington on Saturday. “Of course, there was an important measure taken yesterday.”

He also warned that inflation pressures might require a bigger interest rate rise than previously thought due to the government’s huge energy subsidies for homes and businesses, and its tax cut plans.

Hunt is due to announce the government’s medium-term budget plans on Oct. 31, in what will be a key test of its ability to show it can restore its economic policy credibility.

He cautioned spending would not rise by as much as people would like and all government departments were going to have to find more efficiencies than they were planning.

“Some taxes will not be cut as quickly as people want, and some taxes will go up. So it’s going to be difficult,” he said. He met Treasury officials on Saturday and will hold talks with Truss on Sunday to go through the plans.

Hunt, an experienced minister and viewed by many in his party as a safe pair of hands, said he agreed with Truss’s fundamental strategy of kickstarting economic growth, but he added that their approach had not worked.

“There were some mistakes made in the last few weeks. That’s why I’m sitting here. It was a mistake to cut the top rate of tax at a period when we’re asking everyone to make sacrifices,” he said.

It was also a mistake, Hunt said, to “fly blind” and produce the tax plans without allowing the independent fiscal watchdog, the Office for Budget Responsibility, to check the figures.

The fact that Hunt is Britain’s fourth finance minister in four months is testament to a political crisis that has gripped Britain since Johnson was ousted following a series of scandals.

Hunt said Truss should be judged at an election and on her performance over the next 18 months – not the last 18 days.

However, she might not get that chance. During the leadership contest, Truss won support from less than a third of Conservative lawmakers and has appointed her backers since taking office – alienating those who supported her rivals.

The appointment of Hunt, who ran to be leader himself and then backed Sunak, has been seen as a sign of her reaching out, but the move did little to placate some of her party critics.

“It’s over for her,” one Conservative lawmaker told Reuters after Friday’s events.

AUSTIN, Texas--(BUSINESS WIRE)--As the first multifamily management company to be recognized in the Public Relations and Marketing Excellence Awards, … END_OF_DOCUMENT_TOKEN_TO_BE_REPLACED

There have been whispers of cooling housing and rental prices in the San Francisco Bay Area, but that hasn't yet translated into practical, noticeable … END_OF_DOCUMENT_TOKEN_TO_BE_REPLACED

Cars pass in Independence Square at twilight in Kyiv, Ukraine, Monday, Oct. 31, 2022. Rolling ... [+] blackouts are increasing across Ukraine as the … END_OF_DOCUMENT_TOKEN_TO_BE_REPLACED