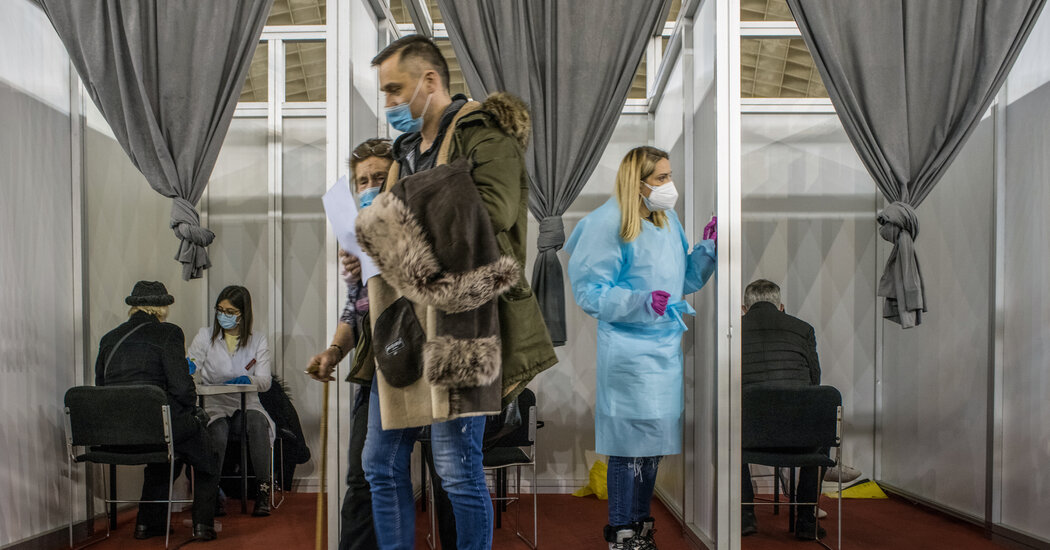 BELGRADE — Stained for years by its brutal role in the horrific Balkan conflicts of the 1990s, Serbia is now basking in the glow of success in a good war: the battle to get its people vaccinated.

Serbia has raced ahead of the far richer and usually better-organized countries in Europe to offer all adult citizens not only free inoculations but a smorgasbord of five different vaccines to choose from.

By contrast, the European Union has stumbled badly in providing shots, with a disjointed procurement and distribution strategy that bet big on the AstraZeneca vaccine. That strategy hit a roadblock this week after key members of the bloc, including Germany and France, suspended inoculations with the vaccine over concerns it might increase the risk of blood clots, compounding delivery problems that stemmed from a production shortfall the company announced in January.

Serbia’s unusual surfeit of vaccines has been a public relations triumph for the increasingly authoritarian government of President Aleksandar Vucic. It has burnished his own as well as his country’s image, weakened his already beleaguered opponents and added a new twist to the complex geopolitics of vaccines.

OurWorldInData shows. It has administered 29.5 doses for every 100 people as of last week compared with just 10.5 in Germany, a country long viewed in this part of the world as a model of efficiency and good governance, and 10.7 in France.

Serbia’s prime minister, Ana Brnabic, attributed her country’s success to its decision to “treat this as a health issue, not a political issue. We negotiated with all, regardless of whether East or West.”

applied to join the European Union more than a decade ago, still wants to join the bloc but added that “regulations in the E.U. are very strict. In pandemic times we need to be more flexible.”

The European Medicines Agency, which regulates what vaccines can be used in the bloc, started reviewing the Sputnik vaccine for use less than two weeks ago — more than three months after Serbia placed an initial order with Moscow for a million doses, and two months after rolling them out for general use. The agency has not yet even started reviewing Chinese vaccines.

Mr. Vucic announced last week that Serbia would become the first European country to start producing China’s Sinopharm vaccine. A new vaccine factory, financed by China and the United Arab Emirates, will start production in the fall, he said.

Serbia’s readiness to embrace non-Western vaccines so far shunned by the European Union could backfire if they turn out to be duds. Sinopharm, unlike Western vaccine makers, has not published detailed data from Phase 3 trials. Data it has released suggest its product is less effective than Western vaccines.

fill out a form online and select whether they don’t care what brand they get or if they prefer either Pfizer-BioNTech, Sputnik V, Sinopharm, AstraZeneca or Moderna.

Not all these vaccines, however, are equally available and appointments for a shot depend on the chosen option. Those wanting Moderna’s vaccine will be waiting a long time: it has not yet arrived in Serbia. The health ministry in Serbia had no immediate comment Tuesday on whether it would follow Germany and others and pause inoculations with AstraZeneca’s vaccine.

On a recent day at the country’s biggest vaccination center, at the Belgrade Fair, a sprawling exhibition complex in the Serbian capital, more than 7,000 people turned up for appointments.

Nearly all received China’s Sinopharm vaccine, which, according to clinical trials, has an efficacy rate of 79 percent, lower than that of Western and Russian vaccines.

Over a certain age

There were also a few booths offering the Pfizer vaccine and Russia’s Sputnik V but supplies of the Chinese offering were clearly far more plentiful.

What is available on any given day, said Dragana Milosevic, a doctor supervising the injections, varies depending on deliveries from a central government-run stockpile.

“I never expected it to be so easy,” said Biljana Stankovic, a 37-year-old molecular biologist, who, waiting to be called into a vaccination booth, said she did not care what she was given. She added that she did not share Mr. Vucic’s political views but “I’m glad and surprised that everything is so well organized.”

With the exception of Hungary, the only other European nation to embrace Sputnik V, European countries have tied themselves in knots over whether to use non-Western vaccines.

In Slovakia, the health minister was forced to resign last week over his decision to place an order for Sputnik V, which some fellow ministers denounced as a “tool of hybrid war.” Hungary has been widely accused of breaking European Union ranks and cozying up to Moscow by using Sputnik.

Serbia has taken delight in showing up the European Union not only at home but in the other states created by the collapse of Yugoslavia. Kosovo, which put its vaccine hopes in help from the European bloc, has so far received no vaccines, other than those provided by Serbia, which started a vaccination program in ethnic Serb enclaves but was ordered to stop by Kosovo’s ethnic Albanian government.

The European Union vaccines travails have exasperated Serbians who believe their future lies with Europe, not Russia or China. “It failed at the most critical time,” said Zoran Radovanovic, a retired professor of epidemiology.

He said he loathed the direction Mr. Vucic has taken the country by limiting media freedom and harassing critics. But, Mr. Radovanovic added: “Unlike so many other promises and false statements by Vucic, this is not just propaganda. Vaccines are something real. We have them.”

GREENVILLE, N.C.--(BUSINESS WIRE)--Employers aiming to win the war on talent have a new “A” team to tap into: college and professional athletes. … END_OF_DOCUMENT_TOKEN_TO_BE_REPLACED

Mortgage rates are likely to rise in July, extending a seven-month streak. High inflation, and the Federal Reserve's efforts to control it, have … END_OF_DOCUMENT_TOKEN_TO_BE_REPLACED