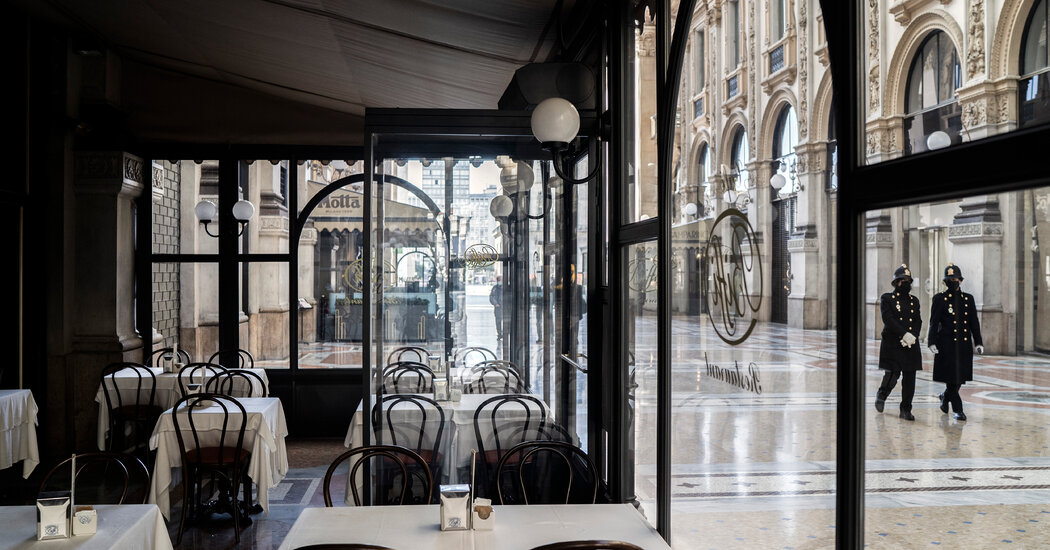 Germany, France, Italy and Spain became the latest countries to suspend use of the vaccine even as a third wave of the pandemic threatens the continent.

ROME — As a third wave of the pandemic crashes over Europe, questions about the safety of one of the continent’s most commonly available vaccines led Germany, France, Italy and Spain to temporarily halt its use on Monday. The suspensions created further chaos in inoculation rollouts even as new coronavirus variants continue to spread.

The decisions followed reports that a handful of people who had received the vaccine, made by AstraZeneca, had developed fatal brain hemorrhages and blood clots.

The company has strongly defended its vaccine, saying that there is “no evidence” of increased risk of blood clots or hemorrhages among the more than 17 million people who have received the shot in the European Union and the United Kingdom.

“The safety of all is our first priority,” AstraZeneca said in a statement Monday. “We are working with national health authorities and European officials and look forward to their assessment later this week.”

latest safety report that “the number and nature of suspected adverse reactions reported so far are not unusual in comparison to other types of routinely used vaccines.”

Among the millions of people who have received the AstraZeneca shot in Britain, 14 reported cases of deep vein thrombosis and 13 reported cases of a pulmonary embolism, conditions that can both be caused by blood clots. Only one of those people died. There were 35 reported cases of thrombocytopenias, a condition involving a low blood platelet count. That also led to one death.

“We are closely reviewing reports but the evidence available does not suggest the vaccine is the cause,” Dr. Phil Bryan with a British regulatory agency said in a statement.

The World Health Organization signed off on the safety of the vaccine developed by researchers at the University of Oxford in partnership with the pharmaceutical company AstraZeneca. The European Medicines Agency, the European Union’s regulatory authority, also approved its use, after monitoring some five million vaccinations already administered across the continent. Its guidance as of Monday remained the same.

They said a 50-year-old patient who had died was in good health before she received the vaccine, but then suffered a fatal “intracerebral hemorrhage”

Another health care worker who died on Friday was described as being in her 30s, and dying of the same cause 10 days after receiving a shot.

The doubt, merited or not, around the AstraZeneca vaccines comes as more countries embrace or contemplate broad new restrictions — in some places for a third or fourth time in a year.

The quiet on the streets of Rome and elsewhere was eerily reminiscent of a year ago, when Italy became the first European country to shut down, underscoring to some how frustratingly little progress had been made in combating the pandemic.

“The second, the third wave, I have lost count,” said Barbara Lasco, 43, as she sat in a park in Milan, near the epicenter of the original European outbreak in northern Italy. “I am puzzled and disappointed; one year was enough time to keep this from happening again.”

Advances against the virus, nearly everywhere, have been maddeningly halting. In Germany, even as many nonessential stores opened last week for the first time in months, health officials called for caution.

“We are seeing clear signs: In Germany the third wave has already begun,” Lothar H. Wieler, the president of the Robert Koch Institute, Germany’s equivalent of the C.D.C., said on Friday. Since then, the daily numbers of infections have increased.

The virus is also spreading, and hospitals are again buckling, across Central Europe.

Prime Minister Viktor Orban of Hungary predicted that this week would be the most difficult since the start of the pandemic in terms of allocating hospital beds and ventilators, as well as mobilizing nurses and doctors.

In Germany, where infections are being driven by the British variant, a more lasting suspension of AstraZeneca could delay vaccination of the population by a month, according to the Central Institute for Registered Doctors.

France is hoping to stave off a new surge of infections with local restrictions, but some health officials think the time for a third national lockdown has come because intensive care units are swamped. “New decisions” will be taken in the coming days to tackle the rise in infections in France, Mr. Macron said on Monday.

Greek authorities last week reported the country’s highest daily rate of infections since mid-November, driven by the British variant; the rise prompted a reversal of plans to reopen schools and shops later this month.

Italy’s prime minister, Mario Draghi, warned on Friday that the country was facing a “new wave of contagion,” driven by more infectious variants of the coronavirus.

He has put an army general in charge of the vaccine rollout and hoped to increase inoculations from 100,000 a day to 500,000.

But that was before the AstraZeneca fears spread more widely.

On Monday, Iacopo Benini, a 32-year-old professor, had his AstraZeneca vaccination appointment canceled 20 minutes before he arrived for his shot in Milan. “Who is going to accept getting AstraZeneca now?” he said.

You were seeing double this week: A spectacular $54 million compound featuring two equally luxurious mansions separated by a private lake in Southwest … END_OF_DOCUMENT_TOKEN_TO_BE_REPLACED