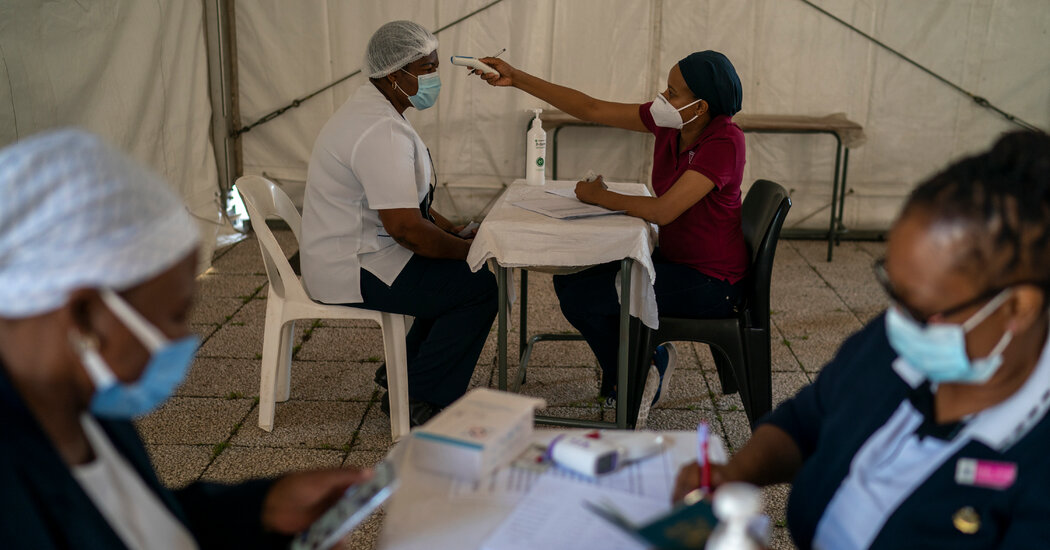 WASHINGTON — Quality-control problems at a Baltimore plant manufacturing Covid-19 vaccines have led health officials on three continents to pause the distribution of millions of Johnson & Johnson doses, as the troubles of a politically connected U.S. contractor ripple across the world.

Doses made at the plant owned by Emergent BioSolutions have not been cleared by the Food and Drug Administration for use in the United States, and the Biden administration has repeatedly assured Americans that none of the Johnson & Johnson shots administered domestically were made there.

But millions of doses have been shipped abroad, including to Canada, the European Union and South Africa. Regulators in various countries are now working to ensure that those doses are safe after the disclosure in March that workers at the Baltimore plant accidentally contaminated a batch of Johnson & Johnson’s vaccine with the harmless virus used to manufacture AstraZeneca’s. Both vaccines were produced at the same site. The mistake forced Emergent to throw out up to 15 million Johnson & Johnson doses after tests showed that the batch failed to meet purity requirements.

E.U. officials, as well as those in Canada and South Africa, said there was no evidence that any of the doses they had received were tainted. But the problems identified in Baltimore have slowed their vaccination efforts while they perform additional quality assessments as a precaution.

said they would “not allow the release of any product until we feel confident that it meets our expectations for quality.” The plant is still finishing batches of vaccine that were already in process.

previously acknowledged that it had allowed doses of AstraZeneca’s Covid-19 vaccine made at the same Emergent plant to be sent to Canada and Mexico but said it had not attested to their quality, instead leaving that assessment to the company and authorities in both countries. Unlike the Johnson & Johnson vaccine, the AstraZeneca vaccine is not approved for use in the United States.

The Times reported last month that Emergent had discarded five lots of AstraZeneca vaccine — each the equivalent of two million to three million doses — between October and January because of contamination or suspected contamination at the same Bayview plant in Baltimore.

The European Union’s drug regulator, the European Medicines Agency, said in a statement to The Times that one batch of vaccine manufactured at the Emergent facility “is being used” after “a thorough testing of the batch and a review of the controls in place at the manufacturing site.” There is no indication of any problems with those doses.

That batch was distributed for use in the European Union only after meeting “the rigorous quality standards of our company and the European Medicines Agency,” Johnson & Johnson said in a statement.

Two more batches, amounting to about 2.5 million doses, are on hold as regulators in Europe and the United States investigate the cause of the contamination at the Emergent plant and ensure that problems have been fixed, the E.M.A. said.

“When the investigations conclude, E.M.A. may decide on actions to prevent future contamination of batches,” the statement said.

Batches of vaccine made at Emergent are not released for bottling until they have passed required safety tests, including one designed to identify “adventitious agents” such as a virus used in the manufacture of another product. People familiar with Emergent’s processes said the tests were much the same whether the vaccine was destined for domestic or foreign use.

one of the lowest vaccination rates of any country, and the Johnson & Johnson vaccine is particularly important to the nation’s plans. Many developing countries are relying on AstraZeneca’s vaccine, but South Africa stopped using it in February after a trial indicated that it was less effective against the dominant coronavirus variant then circulating in the country.

Under its contract with Johnson & Johnson, Emergent manufactured the active ingredient for the vaccine in bulk, and the substance was then sent to other facilities for final processing and packaging. One of the sites performing these final manufacturing stages is a plant run by the South African company Aspen Pharmacare. Johnson & Johnson announced in March that the site would support the company’s pledge to provide vaccine to countries throughout Africa.

The Canadian regulatory authority, Health Canada, said in a statement that officials were working with Johnson & Johnson and the F.D.A. to perform further assessments of vaccine manufactured at the Emergent facility and that the doses “will only be released for distribution once Health Canada is satisfied that they meet the Department’s high standards for quality, safety and efficacy.”

The newly disclosed delays underscore the global impact of the problems at the Baltimore factory operated by Emergent, a government contractor known for its aggressive lobbying and political connections.

As The Times previously reported, the federal government last year banked on Emergent to be the main domestic manufacturer for both the Johnson & Johnson and AstraZeneca vaccines even as evidence of serious quality problems mounted.

announced “significant revenue growth and corresponding profitability” for the first quarter of this year and projected record revenues for 2021, driven largely by the company’s Covid-19 vaccine manufacturing deals.

Emergent built a profitable business largely by cornering the market for biodefense products, a Times investigation found. Throughout most of the last decade, sales of the company’s anthrax vaccines accounted for nearly half of the annual budget of the nation’s emergency medical reserve, the Strategic National Stockpile, leaving the federal government with less money to buy supplies needed in a pandemic.

Emergent has repeatedly touted its influence in Washington in presentations to investors. Six of its 10 board members have previously served in government, and since 2010, the company has spent an average of $3 million a year on lobbying — far outspending similarly sized biotech firms, and roughly matching the outlays of some larger pharmaceutical companies.

The Seattle Seahawks are very much still in the running for Baker Mayfield. (Photo by Stacy ... [+] Revere/Getty Images) Getty Images The Seattle … END_OF_DOCUMENT_TOKEN_TO_BE_REPLACED

(CNN) — Kim Kyung-seop recalls going to cheap bars after class with his friends, where they binged on as much makgeolli as possible. "You know the … END_OF_DOCUMENT_TOKEN_TO_BE_REPLACED