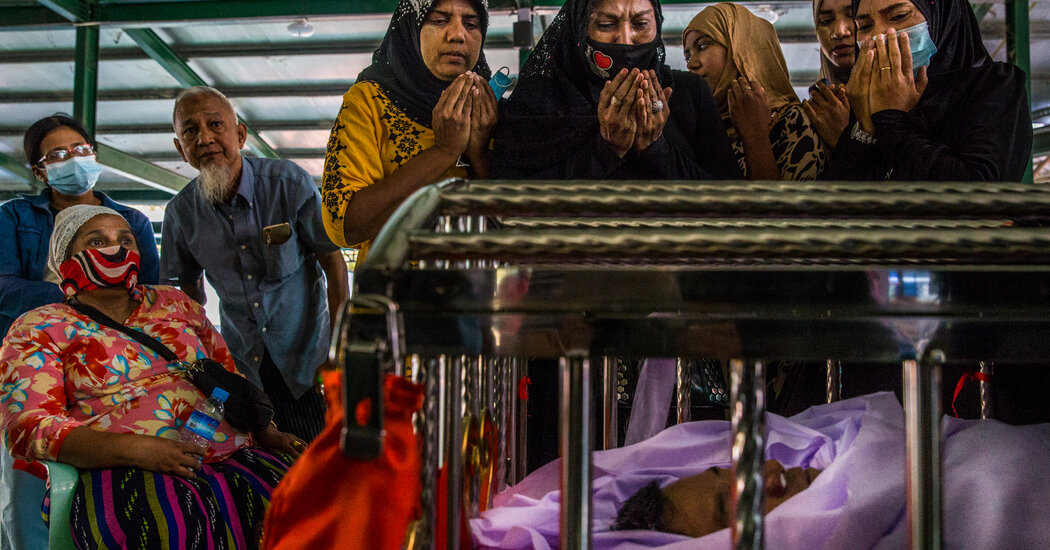 When the police and soldiers arrived in the middle of the night, they fired their guns into the air, threw stones through the windows and threatened to drive a car through the front door if no one opened it. U Shwe Win and his family were asleep. It was 2:30 a.m.

The police and soldiers had come to arrest Mr. Shwe Win’s son, Ko Win Htut Nyein. When they found him, they beat and handcuffed the 19-year-old before hauling him away. His offense, the family was told, was taking videos of the police at a protest in Mandalay the day before.

More than two weeks later, Mr. Shwe Win is still searching for his son. The authorities say they have no record of his arrest. “I felt so hopeless, like I had lost everything at that moment,” Mr. Shwe Win said. “I still don’t know where my son is. I don’t want him to die in their hands, and I worry that they will torture him.”

Since the Feb. 1 coup in Myanmar, millions of pro-democracy protesters have joined demonstrations against the military and participated in general strikes and a civil disobedience movement that have brought the economy to a virtual halt. Security forces have responded with increasing ruthlessness, shooting people in the streets and arbitrarily beating and arresting people.

security forces had killed more than 320 people and arrested or charged more than 2,900, according to a group tracking arrests and killings. The youngest victim, 6, was shot and killed on Wednesday while sitting on her father’s lap.

According to the United Nations High Commissioner for Human Rights, hundreds who were unlawfully detained have disappeared. At least five have died in custody, and two appeared to have been tortured, the agency said.

terrorists” for their brutal methods when carrying out arrests and shooting randomly into crowds and homes.

In southern Myanmar, students from Myeik University gathered for a protest when soldiers and the police arrived. One student, Ma Thae Ei Phyu, 22, a philosophy major, was shot in the back of the neck with rubber bullets from a few feet away.

“I tried not to fall down because I know they have a habit of raping women and girls,” she said. “I didn’t want to get arrested.”

The soldiers rounded up the entire group of about 70 protesters and took them to a nearby air force base and beat them with sticks, plastic pipes, chains and belts, said a teacher, U Nay Lin, 30, who was among those arrested. The beating left huge red welts crisscrossing his back, a photo showed.

Mr. Nay Lin said a man with a tattoo of Ms. Aung San Suu Kyi on his chest received the worst beating of all.

Ms. Thae Ei Phyu was taken to a hospital, where she received stitches for the deep holes in her neck caused by the rubber bullets. She and most of the others were eventually released without charges. Earlier this week, the junta also released more than 600 mostly young protesters who had been detained in Yangon, in a seeming effort to appease the movement.

“They tried to threaten us by arresting and torturing us like this, but we aren’t afraid to die,” she said. “It’s better to die than living under the junta.”

GREENVILLE, N.C.--(BUSINESS WIRE)--Employers aiming to win the war on talent have a new “A” team to tap into: college and professional athletes. … END_OF_DOCUMENT_TOKEN_TO_BE_REPLACED

Mortgage rates are likely to rise in July, extending a seven-month streak. High inflation, and the Federal Reserve's efforts to control it, have … END_OF_DOCUMENT_TOKEN_TO_BE_REPLACED