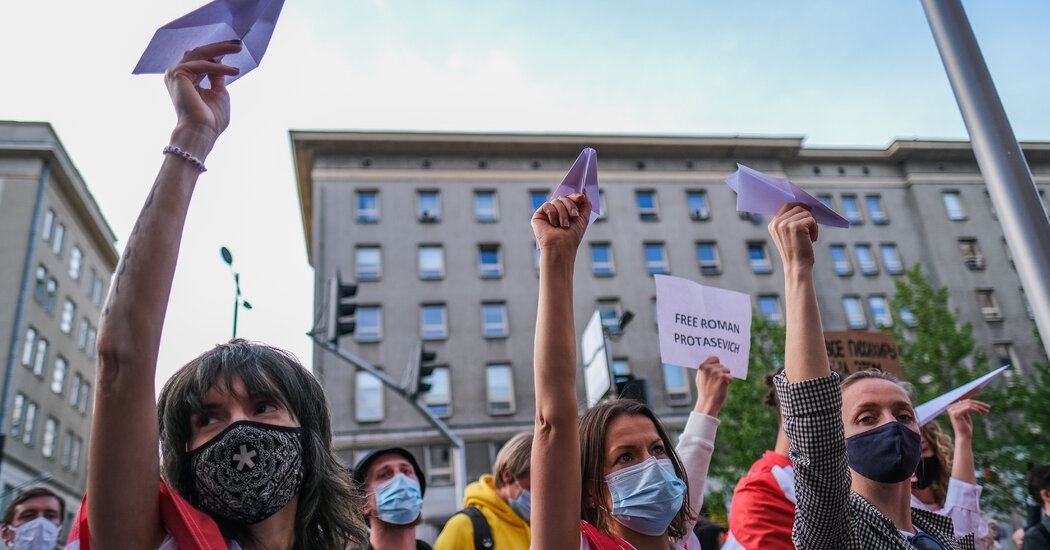 MOSCOW — The tray tables were being raised and the seat backs returned to their upright positions as passengers on Ryanair Flight 4978 prepared for the scheduled landing in the Lithuanian capital, Vilnius. Then the plane made an abrupt U-turn.

For many passengers, it initially seemed like one of those unexpected delays in airline travel. But after the pilot announced the plane had been diverted to Minsk, the capital of Belarus, one passenger — Roman Protasevich, a prominent Belarusian opposition journalist who had been living in exile since 2019 — grew terrified, certain that he faced arrest.

“He panicked because we were about to land in Minsk,” Marius Rutkauskas, who was sitting one row ahead of Mr. Protasevich, told the Lithuanian broadcaster LRT upon arrival in Vilnius.

Sunday’s ordeal — described by many European officials as an extraordinary, state-sponsored hijacking by Belarus to seize Mr. Protasevich — quickly led to one of the most severe East-West flare-ups in recent years.

report rejecting the idea there were K.G.B. agents on the plane, instead showing three people who said on camera that they had decided to stay in Minsk by their own choosing. They included a Greek man who said he had been traveling to Vilnius on his way to visit his wife in Minsk.

In Lithuania, the police launched an investigation on suspicion of hijacking and kidnapping, and interviewed passengers and crew. They were told that the fighter jet dispatched by Mr. Lukashenko to escort the flight had not forced the Ryanair plane to land, according to people with knowledge of the investigation who were not authorized to speak publicly.

Instead, these people said, the pilot had decided to land the plane in Minsk after Belarusian air traffic control had requested that he do so because of a bomb threat on board.

other confessional videos that critics of Mr. Lukashenko have been forced to record while in jail.

an urgent meeting for Thursday to discuss it.

In recent years, Mr. Lukashenko had profited by playing the interests of Russia and the West off against one another. But amid last summer’s popular uprising against him over his disputed re-election, Mr. Lukashenko threw in his lot with Mr. Putin — and has relied on his support ever since.

And some analysts said the restrictions could require costly rerouting for European airlines, which are already avoiding parts of Ukraine, Belarus’s southern neighbor, because of conflict with Russia.

The flight bans could cause new problems for Mr. Lukashenko inside his country, where the ease of travel to the neighboring European Union had long softened the strictures of living inside an authoritarian state. Ukraine, which is not a member of the E.U., also said it would ban flights to and from Belarus. The growing isolation means that Belarusians will increasingly need to travel east to Russia in order to get out of the country.

Yevgeny Lipkovich, a popular Minsk-based blogger and commentator critical of Mr. Lukashenko, said that his own travels abroad had allowed him to “remain an optimist, despite the regime’s best efforts to force me into depression.”

“If they close down the air loophole, there’s no question that the pressure inside the country will increase,” Mr. Lipkovich said. “And it’s disgusting to live in a pariah state.”

Reporting was contributed by Ivan Nechepurenko from Moscow; Tomas Dapkus from Vilnius, Lithuania; Stanley Reed from London; and Matina Stevis-Gridneff and Monika Pronczuk from Brussels.

AUSTIN, Texas--(BUSINESS WIRE)--As the first multifamily management company to be recognized in the Public Relations and Marketing Excellence Awards, … END_OF_DOCUMENT_TOKEN_TO_BE_REPLACED

There have been whispers of cooling housing and rental prices in the San Francisco Bay Area, but that hasn't yet translated into practical, noticeable … END_OF_DOCUMENT_TOKEN_TO_BE_REPLACED

Cars pass in Independence Square at twilight in Kyiv, Ukraine, Monday, Oct. 31, 2022. Rolling ... [+] blackouts are increasing across Ukraine as the … END_OF_DOCUMENT_TOKEN_TO_BE_REPLACED