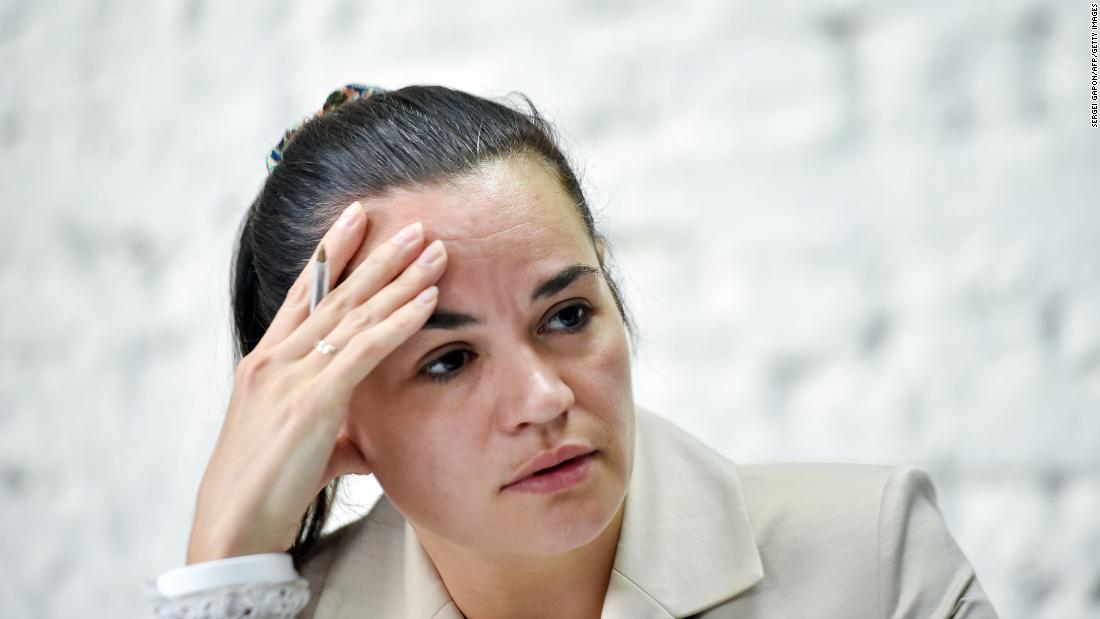 Belarusian opposition leader Sviatlana Tsikhanouskaya said she gave the Biden administration a specific list of targets she would like to see sanctioned as she pushed for the United States and international community to ratchet up pressure on the Lukashenko regime.

Tsikhanouskaya, who is in Washington for meetings with senior administration officials, told reporters Tuesday that she delivered a list of companies that are monopolized by the regime of Belarus’ strongman President Alexander Luakshenko “and his cronies,” including Belaruskali potash as well as oil, wood and steel enterprises.

The Belarusian opposition politician called on the administration to enact stronger sanctions, saying that the she believed the initial tranches were more symbolic and “moral sanctions” – “they didn’t hit the regime and I think that we really lost time,” she said. Tsikhanouskaya said that the sectoral sanctions imposed by the European Union following Lukashenko’s forced diversion of a Ryanair flight were strong, and said the US could follow that policy “and also look at possibility to impose sectoral sanctions on Russia.”

On Tuesday, she met with National Security Adviser Jake Sullivan and congressional lawmakers and was slated to meet with US Agency for International Development (USAID) Administrator Samantha Power and US Agency for Global Media (USAGM) Acting CEO Kelu Chao. Tsikhanouskaya said she intended to further discuss “possible international efforts to isolate the regime, politically and economically, to make (Lukashenko) toxic and costly, including for Russia,” through both tangible and symbolic isolation.

However, she later noted that she didn’t want to talk too extensively about Russia “because our fight is not between East and West; our fight is between past and future.”

“Our fight is inside Belarus, and we are fighting for common values, for human rights, for rule of law, for democratic changes, and this is very understandable for the USA. As for Russia, you know, if Russia wants to play a constructive role in getting out of the Belarusian crisis, they just have to stop support of Lukashenko,” adding that she asked the US government to help send the message that if actors don’t want to help with the fight for democracy in Belarus, they should not interfere with it either.

Tsikhanouskaya said she discussed sanctions and support for civil society in her meeting with Secretary of State Antony Blinken, Undersecretary of State for Political Affairs Toria Nuland and other senior State Department officials on Monday. She noted that many Belarusian people had to flee the country, many lost their jobs, businesses were closed down and mass media was destroyed by the Lukashenko regime.

“All these people continue to fight, but they need assistance. And we have to look for ways how to provide first of all for those who are on the ground, political prisoners, their relatives, activists on the ground, to supply volunteers with the equipment to print newspapers, to supply people with lawyers, to help to pay fees for people so the regime (doesn’t) put their children into orphanages and (doesn’t) confiscate property,” she said. “Of course it’s important to support journalists and mass media, through traditional and (emerging media) like YouTube channels, Telegram channels, because we need to provide the world with information.”

Tsikhanouskaya said they also discussed “justice” in the meeting, “because it’s necessary to avoid impunity.”

“We are collecting evidence of all the crimes since August 9. We are accumulating them in one place and the European Union launched an international accountability platform,” she said, noting that they hoped to bring the perpetrators of the violent repression in Belarus to justice once changes are made in the former Soviet state.

Asked by CNN whether she thought Lukashenko should stand trial before an international body like the International Criminal Court, Tsikhanouskaya said it “is evident that Lukashenko is criminal,” but “it’s very difficult to bring him to justice in international court because he’s actually protected by immunity.”

“And now many international lawyers are looking for loopholes … because he’s not recognized by the majority of countries, you know, how according to constitution he could be released of this immunity and investigation against him could be started,” she said.

Tsikhanouskaya, a former teacher whose husband was jailed by the Lukashenko regime, described her own plight, saying that although she lives in Lithuania, she still lives in fear every day. She also dismissed the title of “opposition leader,” saying she’s “not leading (the) opposition movement, because we are the majority.”

“It’s people themselves who are fighting. Even if Tsikhanouskaya disappears one day for I don’t know what reasons, this uprising, this movement will continue,” she said. “We are not fighting for a leader, we are fighting against dictatorship.”

You were seeing double this week: A spectacular $54 million compound featuring two equally luxurious mansions separated by a private lake in Southwest … END_OF_DOCUMENT_TOKEN_TO_BE_REPLACED