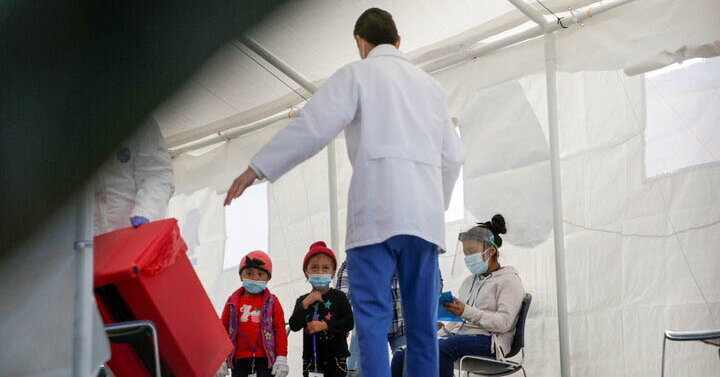 WASHINGTON — The Biden administration is directing the Federal Emergency Management Agency to assist in processing an increasing number of children and teenagers who have filled detention facilities at the southwest border, as criticism mounts over the treatment of young migrants.

FEMA, which normally provides financial assistance during natural disasters, will help find shelter space and provide “food, water and basic medical care” to thousands of young migrants, Michael Hart, a spokesman for the agency, said in a statement.

The administration also asked officials in the Homeland Security Department to volunteer “to help care for and assist unaccompanied minors” who have been held in border jails that are managed by Customs and Border Protection.

Previous administrations have also dispatched FEMA to help process migrants during surges in border crossings. However, the Biden administration cannot use disaster aid funding to support the processing of migrants in Texas after they cross the border without the consent of Gov. Greg Abbott, a Republican. States must request the funding from the federal government.

9,457 children, including teenagers, were detained at the border without a parent in February, up from more than 5,800 in January.

The Biden administration has so far failed to quickly process the young migrants and transfer them to shelters managed by the Department of Health and Human Services, where they are held until the government matches them with a sponsor. The administration has struggled to expand the capacity of those shelters, where roughly 8,500 migrants were held this week. The Biden administration recently directed the shelters intended to hold the children to return to normal capacity, despite the coronavirus pandemic.

surge of crossings is adding new pressure in a divisive policy fight that the last three administrations have also confronted.

Mr. Biden’s critics have moved quickly in recent days to blame him for the increase of arrivals that they say threatens the country’s safety, economic recovery and health as the coronavirus pandemic continues to claim thousands of lives.

Many of them appear eager to shift attention away from the president’s handling of the pandemic and his $1.9 trillion stimulus bill, which has been well received by the public, and toward an issue that could unite the Republican Party in opposition to Democrats.

Speaker Nancy Pelosi on Sunday called the influx of migrants, particularly children, “a humanitarian challenge to all of us.” But she was determined to cast blame on Mr. Trump and his policies, and longstanding unrest in Central America that had driven waves of migrants north.

“What the administration has inherited is a broken system at the border, and they are working to correct that in the children’s interest,” she said on “This Week” on ABC.

Representative Veronica Escobar, Democrat of Texas, who had also pointed to the Trump administration, said she found the situation at a processing facility that she had toured in El Paso on Friday “unacceptable.”

GREENVILLE, N.C.--(BUSINESS WIRE)--Employers aiming to win the war on talent have a new “A” team to tap into: college and professional athletes. … END_OF_DOCUMENT_TOKEN_TO_BE_REPLACED

Mortgage rates are likely to rise in July, extending a seven-month streak. High inflation, and the Federal Reserve's efforts to control it, have … END_OF_DOCUMENT_TOKEN_TO_BE_REPLACED