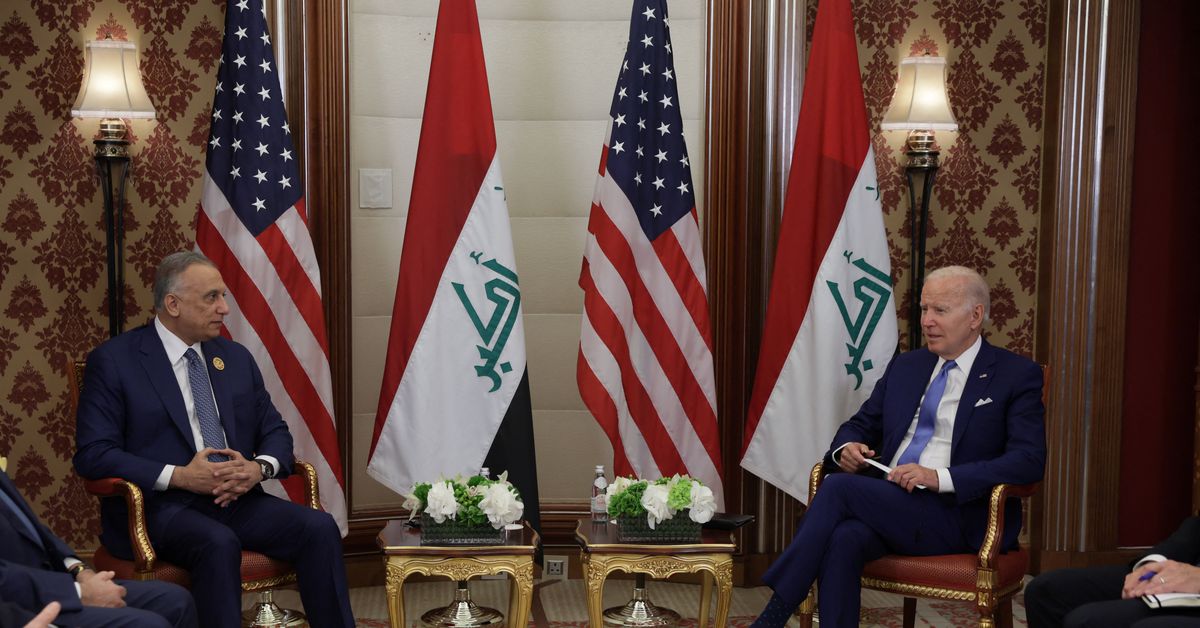 JEDDAH, Saudi Arabia, July 16 (Reuters) – President Joe Biden told Arab leaders on Saturday that the United States would remain an active partner in the Middle East, but he failed to secure commitments to a regional security axis that would include Israel or an immediate oil output rise.

Biden, who began his first trip to the Middle East as president with a visit to Israel, presented his vision and strategy for America’s engagement in the Middle East at an Arab summit in Jeddah.

The summit communique was vague, however, and Saudi Arabia, Washington’s most important Arab ally, poured cold water on U.S. hopes the summit could help lay the groundwork for a regional security alliance – including Israel – to combat Iranian threats.

“We believe there’s great value in including as many of the capabilities in this region as possible and certainly Israel has significant air and missile defence capabilities, as they need to. But we’re having these discussions bilaterally with these nations,” a senior administration official told reporters.

A plan to connect air defence systems could be a hard sell for Arab states that have no ties with Israel and balk at being part of an alliance seen as against Iran, which has a strong regional network of proxies including Iraq, Lebanon and Yemen.

Saudi Arabia’s foreign minister, Prince Faisal bin Farhan Al Saud, said he was not aware of any discussions on a Gulf-Israeli defence alliance and that the kingdom was not involved in such talks.

He told reporters after the U.S.-Arab summit that Riyadh’s decision to open its airspace to all air carriers had nothing to do with establishing diplomatic ties with Israel and was not a precursor to further steps. read more

Biden has focused on the summit with six Gulf states and Egypt, Jordan and Iraq, while downplaying the meeting with MbS which drew criticism in the United States over human rights concerns.

Biden had said he would make regional power Saudi Arabia a “pariah” on the global stage over the 2018 murder of journalist Jamal Khashoggi by Saudi agents, but ultimately decided U.S. interests dictated a recalibration, not a rupture, in relations with the world’s top oil exporter.

The crown prince told Biden that Saudi Arabia had acted to prevent a repeat of mistakes like the killing of Khashoggi and that the United States had also made mistakes, including in Iraq, a Saudi minister said.

Biden exchanged a fist bump with MbS on Friday but said he told him he held him responsible for Khashoggi’s murder at the Saudi consulate in Istanbul.

“The President raised the issue … And the crown prince responded that this was a painful episode for Saudi Arabia and that it was a terrible mistake,” said Saudi Minister of State for Foreign Affairs Adel al-Jubeir.

The accused were brought to trial were and being punished with prison terms, he said.

Jubeir, talking to Reuters about Friday’s conversation, said MbS had made the case that trying to impose values on other countries by force could backfire.

“It has not worked when the U.S. tried to impose values on Afghanistan and Iraq. In fact, it backfired,” Jubeir quoted the crown prince as telling Biden. “Countries have different values and those values should be respected!”

The exchange highlighted tensions that have weighed on relations between Washington and Riyadh, its closest Arab ally, over issues including Khashoggi, oil prices and the Yemen war.

Biden needs the help of OPEC giant Saudi Arabia at a time of high crude prices and other problems related to the Russia-Ukraine conflict. Washington also wants to curb Iran’s sway in the region and China’s global influence.

Biden came to Saudi Arabia hoping to reach a deal on oil production to help drive down gasoline prices that are driving inflation above 40-year highs and threatening his approval ratings.

He leaves the region empty-handed but hoping the OPEC+ group, comprising Saudi Arabia, Russia and other producers, will boost production at a meeting on Aug. 3.

“I look forward to seeing what’s coming in the coming months,” Biden said.

A second senior administration official said Biden would announce that Washington has committed $1 billion in new near- and long-term food security assistance for the Middle East and North Africa, and that Gulf states would commit $3 billion over the next two years in projects that align with U.S. partnerships in global infrastructure and investment.

Gulf states, which have refused to side with the West against Russia over Ukraine, are seeking a concrete commitment from the United States to strategic ties that have been strained over perceived U.S. disengagement from the region.

Riyadh and Abu Dhabi have been frustrated by U.S. conditions on arms sales and at their exclusion from indirect U.S.-Iran talks on reviving a 2015 nuclear pact they see as flawed for not tackling concerns about Iran’s missile programme and behaviour.

Israel had encouraged Biden’s trip to Saudi Arabia, hoping it would lead to warmer ties between it and Riyadh as part of a wider Arab rapprochement.

Three men were indicted in the death of the notorious gangster James (Whitey) Bulger, who was beaten to death four years ago in a West Virginia … END_OF_DOCUMENT_TOKEN_TO_BE_REPLACED

Dr. Connolly and Dr. Mott live in the North Baltimore neighborhood of Homeland, known for its strong public schools and colonial architecture, which … END_OF_DOCUMENT_TOKEN_TO_BE_REPLACED