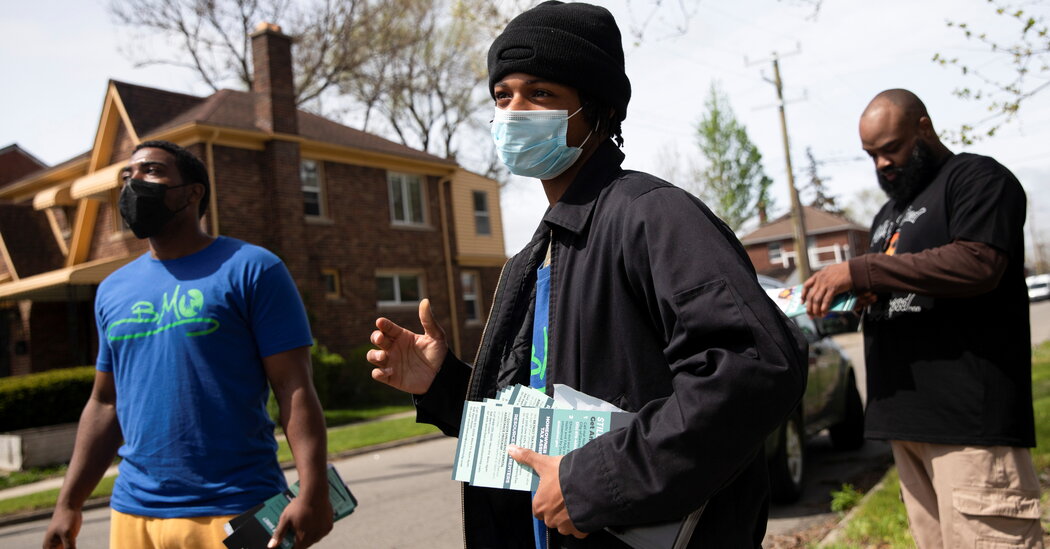 Public health experts are praising President Biden’s announcement that his administration would create a federal stockpile of coronavirus vaccine doses and invest millions in community outreach, saying the moves would help immunize underserved communities and ensure doses would go where they’re most needed as demand falls.

Until now, vaccines had been allotted to states strictly on the basis of population, despite reports of wasted doses and pleas for more of them where the virus was surging, as in Michigan just weeks ago. In a reversal, the Biden administration is now trying to match supply with demand. Federal officials informed states on Tuesday that if they did not order their full allocation of doses in a given week, that vaccine would be considered part of a federal pool, available to other states that wanted to order more.

The administration had been unwilling to shift doses to states that were faster to administer them out of a concern that low-income communities would lose out to richer areas where residents were more willing to get shots.

the new coronavirus strategy that Mr. Biden announced on Tuesday at the White House: Pharmacies are to allow people to walk in for shots, and pop-up and mobile clinics will distribute vaccines, especially in rural areas. Federal officials also plan to enlist the help of family doctors and other emissaries who are trusted voices in their communities.

“We’ve got the product and we’ve vaccinated the very high-risk people, elderly people in nursing homes, people with diseases,” said Dr. Robert Murphy, executive director of Northwestern University’s Institute for Global Health. “Now we have to get the healthy ones and the younger ones and the ones that are being referred to as vaccine-hesitant.”

Allowing walk-ins at pharmacies would cut down on waste, he said, and funding for community outreach through trusted institutions like churches and schools could help reach people who are reluctant. That could offset the misinformation that has complicated efforts to vaccinate Black and Hispanic residents, who also face obstacles like language and technology barriers and less access to medical facilities.

Dr. Eric Topol, a professor of molecular medicine at Scripps Research in La Jolla, Calif., said he was “overjoyed” by the announcement. Dr. Topol pushed for loosening vaccine allocation limits last month, when Michigan was hit with a virus surge and unsuccessfully sought a boost in supply.

more than 106 million people in the United States were fully vaccinated and more than 56 percent of adults — or almost 148 million people — had received at least one shot. That has contributed to a steep decline in cases, hospitalizations and deaths across all age groups, federal officials said.

But despite a flood of available doses, the pace of vaccination has fallen considerably over the past two and a half weeks. Providers are now administering an average of about 2.19 million doses per day, about a 35 percent decrease from the peak of 3.38 million reported on April 13, according to data from the Centers for Disease Control and Prevention.

Officials across the country say they believe that despite falling demand, a substantial portion of Americans will get vaccinated if given more support and more information from trusted messengers, like personal doctors.

“We need to be in the community, asking the community what works for them and keeping that presence,” said Dr. Karen Landers, Alabama’s assistant state health officer. She added: “We are not giving up.”

MUSCATINE, Iowa--(BUSINESS WIRE)--HNI Corporation (NYSE: HNI) announced today its Board of Directors declared a quarterly dividend of 32 cents per … END_OF_DOCUMENT_TOKEN_TO_BE_REPLACED

Tokyo (CNN) — The Japan Tourism Agency announced on Tuesday, May 17 that it would start allowing small group tours in May as part of a "test tourism" … END_OF_DOCUMENT_TOKEN_TO_BE_REPLACED

If you’re superstitious, today is your day.That's because it's Friday the 13th (the only one of the year, in fact). It's a day when bad juju reigns … END_OF_DOCUMENT_TOKEN_TO_BE_REPLACED