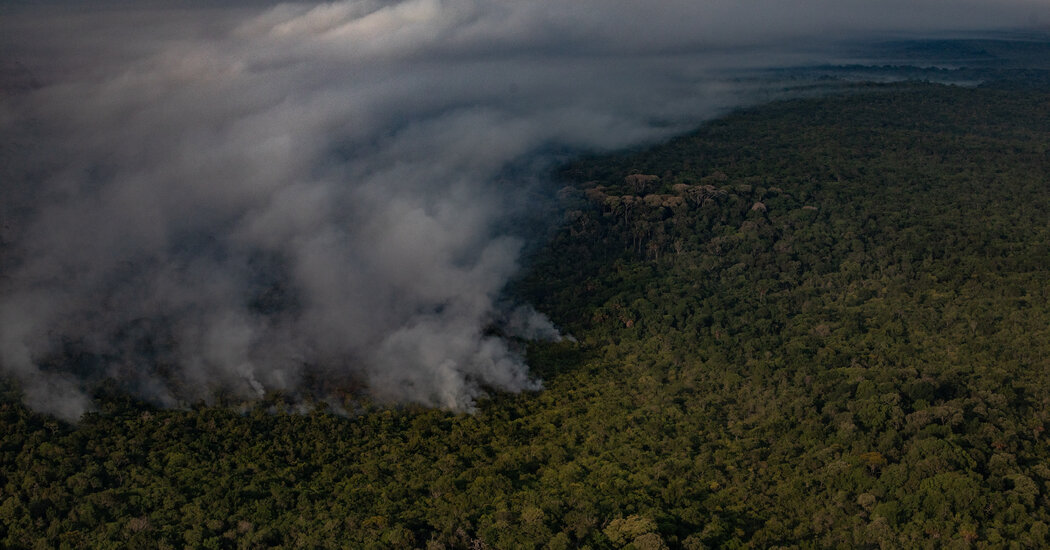 This story was produced in partnership with the Pulitzer Center’s Rainforest Investigations Network.

RIO DE JANEIRO — As the Biden administration rallies the international community to curb global warming in a climate change summit this week, Brazil is pledging to play a critical role, going as far as promising to end illegal deforestation by 2030.

There’s a catch: Brazil’s president, Jair Bolsonaro, wants the international community to pledge billions of dollars to pay for the conservation initiatives.

And donors are reluctant to provide the money, since Brazil under the Bolsonaro administration has been busy doing the opposite of conservation, gutting the country’s environmental protection system, undermining Indigenous rights and championing industries driving the destruction of the rainforest.

Mr. Bolsonaro’s watch, deforestation in the Amazon rainforest, by far the largest in the world, has risen to the highest level in over a decade. The destruction, which has been driven by loggers clearing land for cattle grazing and for illegal mining operations, sparked global outrage in 2019 as huge wildfires raged for weeks.

European Union, Norway and others in warning that its worsening reputation hampers the country’s economic potential.

that Norway and Germany froze in 2019 after Mr. Bolsonaro’s government criticized some of the projects and dismantled safeguards to ensure the money was used effectively.

“The shamelessness of the government to ask for resources abroad is striking,” Ms. Araújo said. “Why won’t he use the money that’s there?”

Environmental and Indigenous organizations have expressed deep skepticism about Mr. Bolsonaro’s professed willingness to fight deforestation and they have warned international donors to refrain from giving the Brazilian government money they fear could be used to undermine environmental protection.

In recent weeks, environmentalists have raised the alarm, and celebrities — including the Brazilian singer Caetano Veloso and the American actor Leonardo DiCaprio — signed a letter that conveyed “profound concern” about the talks.

There is no sign that the Biden administration is considering offering to fund deforestation efforts on a significant scale, which would require support from Congress.

Jen Psaki, the White House press secretary, said last week that the United States does not expect to announce a bilateral agreement with Brazil at this week’s climate summit.

an analysis by Climate Observatory.

After the country’s vice president, Hamilton Mourão, announced the government’s first target for deforestation reduction earlier this month, experts pointed out that reaching the goal would leave Brazil by the end of 2022 with a level of deforestation 16 percent higher than the one Mr. Bolsonaro inherited in 2019.

The Bolsonaro administration is backing a bill that would give land grabbers amnesty, a move that would open up a swath of the Amazon at least the size of France to largely unregulated development. Another initiative it is pressing in Congress would make it easier for companies to get environmental licenses and would pave the way for legal mining operations in Indigenous territories.

And there is deep distrust toward Mr. Salles among environmentalists and public servants in the field. A senior federal police official in the Amazon recently accused the minister of obstructing a law enforcement operation against illegal loggers.

Private sector leaders are among the most concerned over the government’s record on the environment. Though China buys almost a third of Brazil’s exports, Americans are crucial investors in companies whose supply chains are vulnerable to deforestation.

In an open letter, the heads of dozens of major Brazilian companies, including the meatpacker JBS and the Itaú bank, urged the government to set more ambitious carbon emission reduction targets.

“Any work that reduces illegal deforestation benefits the private sector,” said Marcello Brito, the president of the Brazilian Agribusiness Association, which was among the signatories. “What I fear is a boycott by the market.”

That’s a prospect Mr. Chapman, the American ambassador, has underscored.

AUSTIN, Texas--(BUSINESS WIRE)--As the first multifamily management company to be recognized in the Public Relations and Marketing Excellence Awards, … END_OF_DOCUMENT_TOKEN_TO_BE_REPLACED

There have been whispers of cooling housing and rental prices in the San Francisco Bay Area, but that hasn't yet translated into practical, noticeable … END_OF_DOCUMENT_TOKEN_TO_BE_REPLACED

Cars pass in Independence Square at twilight in Kyiv, Ukraine, Monday, Oct. 31, 2022. Rolling ... [+] blackouts are increasing across Ukraine as the … END_OF_DOCUMENT_TOKEN_TO_BE_REPLACED