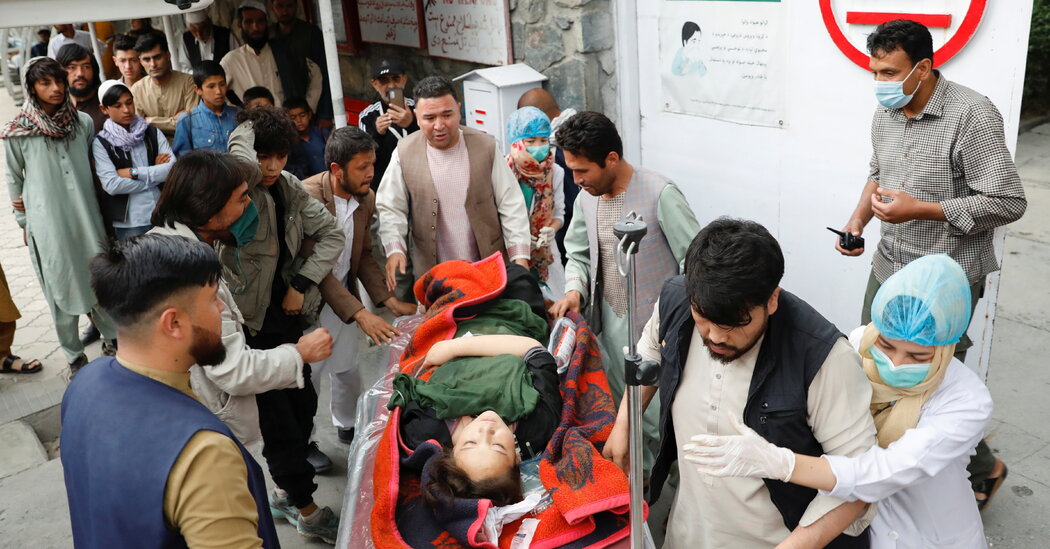 KABUL, Afghanistan — An explosion killed at least 20 people and wounded dozens of others in Afghanistan’s capital Saturday, local officials said, and many of the victims were female students.

Details of the attack in front of Sayed Ul-Shuhada high school were murky. It is unclear if there were multiple explosions, if it was a coordinated attack, or involved a car bomb or a suicide vest. But ambulances raced across the city toward the site into the evening.

The blast — and the possible targeting of female students — comes as rights groups and others have raised fears that the looming American troop withdrawal will endanger the progress that women have made in the patriarchal society in recent years. Many fear that if the Taliban widen their grip over parts of the country, they will reimpose the oppressive rules they enforced under their regime in the 1990s.

Sayed Ul-Shuhada hosts classes for boys in the morning and for girls in the afternoon. The blast occurred around 4 p.m.

condemned the attack on social media.

Mohammad Hussain Jawhari, a resident of the area, said three rockets were fired at the gates while the girls were leaving the school. Another eyewitness said the blasts were caused by multiple car bombs. A spokesman for the Interior Ministry said the reason for the explosion was unclear.

“I am on my way to the hospital — two relatives are missing. I checked at least 10 hospitals and they were nowhere to be found,” Mr. Jawharhi said. “People have gathered in the area. They are really angry. It is not for the first time that our kids get blown up and the government doesn’t do anything.”

according to data gathered by The New York Times.

MUSCATINE, Iowa--(BUSINESS WIRE)--HNI Corporation (NYSE: HNI) announced today its Board of Directors declared a quarterly dividend of 32 cents per … END_OF_DOCUMENT_TOKEN_TO_BE_REPLACED

Tokyo (CNN) — The Japan Tourism Agency announced on Tuesday, May 17 that it would start allowing small group tours in May as part of a "test tourism" … END_OF_DOCUMENT_TOKEN_TO_BE_REPLACED

If you’re superstitious, today is your day.That's because it's Friday the 13th (the only one of the year, in fact). It's a day when bad juju reigns … END_OF_DOCUMENT_TOKEN_TO_BE_REPLACED