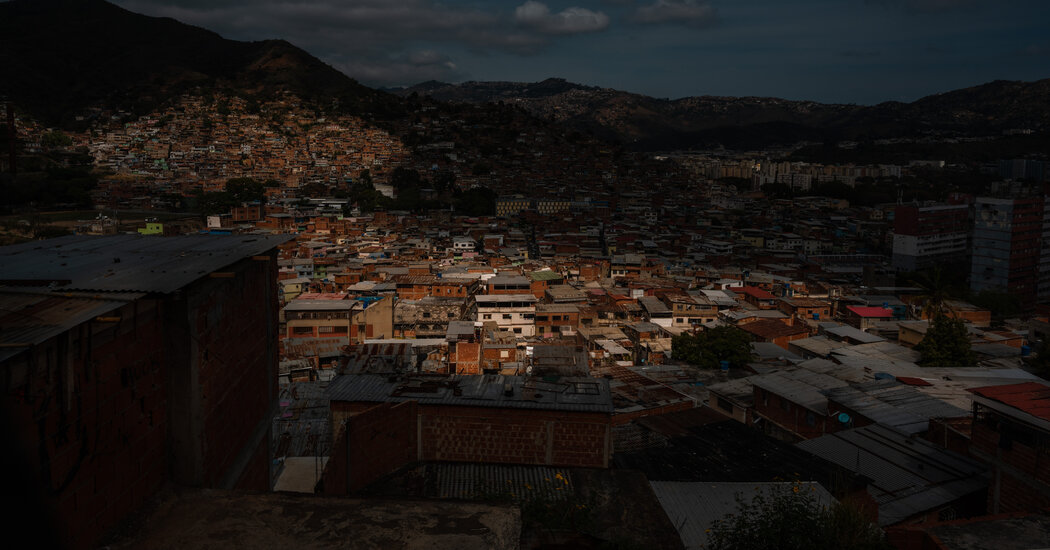 But as the Venezuelan state disintegrates under the weight of Mr. Maduro’s corrupt leadership and American sanctions, his government is losing control of segments of the country, even within his stronghold: the capital, Caracas.

Nowhere is his weakening grip on territory more evident than in Cota 905, a shantytown that clings to a steep mountainside overlooking the gilded halls from which Mr. Maduro addresses the nation.

policing, road maintenance, health care and public utilities, to pour dwindling resources into Caracas, home of the political, business and military elites who form his support base.

Hunkered down in his fortified Caracas residences, Mr. Maduro crushed the opposition, purged the security forces of dissent and enriched his cronies in an effort to eliminate challenges to his authoritarian rule.

In remote areas, swathes of national territory fell to criminals and insurgents. But gang control of Cota 905 and the surrounding shantytowns, which lie just two miles from the presidential palace, is evidence that his government is losing its grip even on the center of the capital.

Across the city, other armed groups have also asserted territorial control over working-class neighborhoods.

“Maduro is often seen as a traditional strongman controlling every aspect of Venezuelans’ lives,” said Rebecca Hanson, a sociologist at the University of Florida who studies violence in Venezuela. “In reality, the state has become very fragmented, very chaotic and in many areas very weak.”

As the government’s reach in Caracas’s shantytowns withered, organized crime grew, forcing Mr. Maduro’s officials to negotiate with the largest gangs to limit violence and maintain political control, according to interviews with a dozen residents, as well as police officers, officials and academics studying violence.

In the process, the most organized gangs began supplanting the state in their communities, taking over policing, social services and even the enforcement of pandemic measures.

Police officers say the gang that controls Cota 905 now has around 400 men armed with the proceeds from drug trafficking, kidnapping and extortion, and that it exerts complete control over at least eight square miles in the heart of the capital.

Gang members with automatic weapons openly patrol the shantytown’s streets and those of the surrounding communities, and guard entry points from rooftop watchtowers. The first checkpoint appears just a few minutes’ drive from the headquarters of Mr. Maduro’s secret police.

As the Venezuelan economy went into a tailspin, the Cota gang began offering financial support to the community, supplanting Mr. Maduro’s bankrupt social programs, which once offered free food, housing and school supplies for the poor.

After monopolizing the local drug trade, the Cota 905 gang imposed strict rules on the residents in return for stopping the once endemic violence and petty crime. And many residents welcome its hard line on crime.

“Before, the thugs robbed,” said Mr. Ojeda, a Cota 905 resident who, like others in the community, asked that his full name not be published for fear of crossing the gangsters. “Now, they are the ones who come to you, without fail, with anything that goes missing.”

During his tenure, Mr. Maduro has veered from brutal suppression of organized crime groups to accommodation in an attempt to check rising crime.

In 2013, he withdrew security forces from about a dozen troubled spots, including Cota 905, naming them “Peace Zones,” as he tried to placate the gangs. Two years later, when the policy failed to check crime, he unleashed a wave of brutal police assaults on the shantytowns.

The police operations resulted in thousands of extrajudicial killings, according to the United Nations, earning Mr. Maduro charges of committing crimes against humanity and the hatred of many shantytown residents. Faced with the onslaught, the gangs closed ranks, creating ever larger and more complex organizations, according to Ms. Hanson and her colleague, the researcher Verónica Zubillaga.

Unable to defeat the Cota gang, Mr. Maduro’s government returned to negotiations with its leaders, according to a police commander and two government officials who held talks with the gang and worked to put the agreements in place.

Security forces are once again banned from entering the community, according to the police commander, who is not authorized to discuss state policy and did so on condition of anonymity.

Under the deal with the government, the Cota gang has reduced kidnappings and murders, and began carrying out some state policies. During the pandemic, gang members strictly enforced lockdown rules and mask wearing, local residents said. And the gang is working with the government to distribute the scant remaining food and school supplies to the residents, residents and the two officials said.

“The gang is focused on the community,” said Antonio Garcia, a shantytown resident. “They make sure we get our bag of food.”

Mr. Ojeda said he received $300 from the gang the last Carnival season to buy toys and sweets for his family, a fortune in a country where the minimum monthly wage has collapsed to about $2. Residents said young people in the community are offered jobs as lookouts or safe house guards for between $50 and $100 a week, more than most doctors and engineers make in Venezuela.

Taking these jobs is easier than leaving them. Soon after the oldest son of Ms. Ramírez — who did not want to give her full name out of fear of the gang — began serving as a lookout in Cota 905, he discovered that his life now belonged to the gang.

“He had new clothes, new shoes, but he couldn’t stop crying,” Ms. Ramírez said. “He wanted to go back and couldn’t.”

Anti-government protests are banned in the shantytown, and gang members summon residents to the polling stations on elections, said the residents.

The members “tell us that if the government is toppled, we would be affected too, because the police would return,” said Ana Castro, a Cota resident. “The ‘Peace Zone’ would end, and we would all suffer.”

In private, some government officials defend the nonaggression pacts with the biggest gangs, saying the policy has drastically reduced violence.

Violent deaths in Caracas shantytowns have halved since the mid-2010s, when the Venezuelan capital was one of the world’s deadliest cities, according to figures from a local nonprofit, Mi Convive.

But academics and analysts studying crime in the city say the drop in homicides points to the growing power of Caracas’s gangs against an increasingly weak government. The imbalance, experts said, puts the government and the population in an increasingly dangerous and vulnerable position.

The power shift was evident in April, when the Cota gang shot up a police patrol car and took over a section of highway running through Caracas. The area was a five-minute drive from the presidential palace, and the blockade paralyzed the capital for several hours.

But the government stayed silent through it all. The security forces never came to retake the highway. Once the gang left, officers quietly cleared out the blasted patrol car.

Joe Burrow #9 of the Cincinnati Bengals against the Tennessee Titans during the AFC Divisional Playoff at Nissan Stadium on January 22, 2022 in … END_OF_DOCUMENT_TOKEN_TO_BE_REPLACED