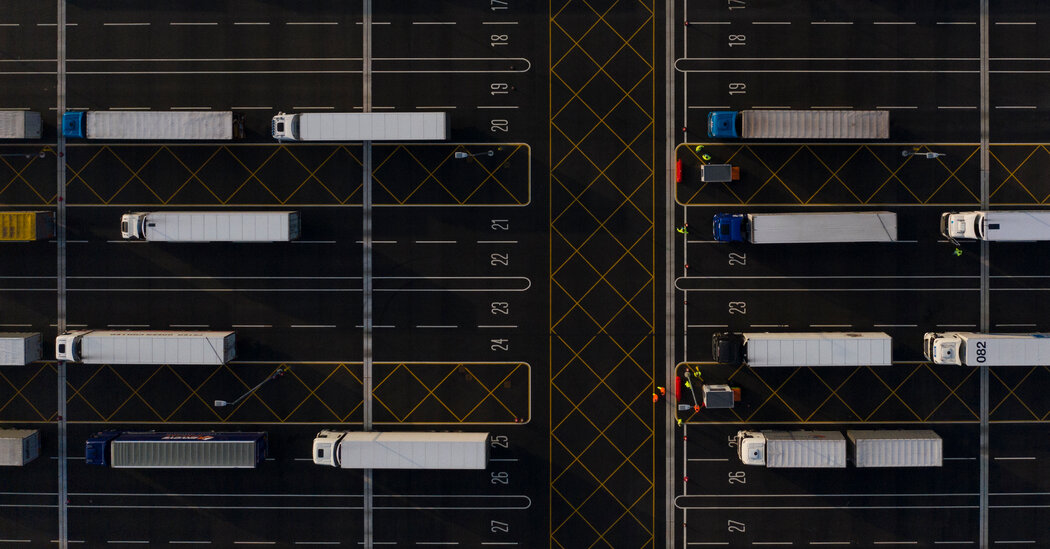 LONDON — It was something politicians spent an age debating, diplomats devoted years to negotiating and officials spent a fortune preparing for.

But on Thursday Britain made the embarrassing admission that it is still not fully ready for Prime Minister Boris Johnson’s biggest political project, Brexit.

Almost five years after Britons voted to leave the European Union, the government said it would wave through some goods arriving at British ports from the continent until January 2022 — a tacit admission that it lacks the capacity to perform the border checks required by Brexit.

The latest postponement to the Brexit process came as a relief to British businesses because it averts the risk of supermarkets running out of fresh produce, or car factories missing out on parts supplies.

according to a survey by Make UK, an organization representing manufacturers. Half said administrative and other costs associated with shipping had risen.

With tensions growing over trade, vaccine supplies and other issues, relations between London and Brussels have deteriorated into a state of semi-permanent friction.

In a statement, the British government said it was changing plans at the ports in response to complaints from businesses that had faced severe challenges during the pandemic.

“As a sovereign trading nation outside the E.U., we have freedom to take decisions in our national interest — and in the interest of our businesses,” said David Frost, who negotiated the Brexit trade deal with the European Union for Britain and is now a cabinet minister responsible for implementing it.

“We will now introduce border controls broadly six months later than planned to give traders time to focus on getting back on their feet as the economy opens up after a difficult year,” he said in a statement.

Still, the decision has prompted some mild ridicule from those who hark back to the 2016 campaign slogan urging voters to support Brexit and “take back control.”

The new ethos, critics joke, is to do this by not exercising any control at all.

Ian Wright, chief executive of the Food and Drink Federation, a trade organization, said that without the delay, his sector faced “disruption, extra costs and potentially shortages of some goods, all of which were potentially avoidable.”

Applying the checks originally planned would also have had an impact on continental truckers’ willingness to come to Britain, which was “already fragile,” he said.

Many trucks delivering goods from continental Europe to Britain return empty to avoid time-consuming checks when they arrive in countries such as France, Belgium or the Netherlands.

Thursday’s decision followed the announcement of a separate and much more politically sensitive choice to delay fuller border checks on goods going from Britain to Northern Ireland.

Because trade with Northern Ireland is covered by a separate agreement with the European Union, Britain’s unilateral decision to delay checks on some goods headed there has angered the bloc, which says it violates international law.

The bloc’s executive body, the European Commission, is expected to begin legal action against Britain in the coming days.

Tensions between Britain and the European Union have alarmed businesses. Adam Marshall, director general of the British Chambers of Commerce, described Thursday’s decision as a welcome but temporary solution.

“What businesses want to see is an end to the damaging political rhetoric from both sides, and a focus on improving border flow for the long term,” he said.

Mr. Wright echoed that sentiment and said that Thursday’s announcement reflected not just a lack of infrastructure at British ports but also a worry that many continental firms were ill-prepared for the new paperwork.

But Mr. Lowe, the analyst, said that British preparations for Brexit had been hampered by political considerations and by the government’s desire to present the policy in a positive light. That meant that companies were given little information about the volume of red tape until late in the process.

The poshest place in California's Coachella Valley is The Madison Club. This exclusive gated community in La Quinta is where A-listers and tycoons … END_OF_DOCUMENT_TOKEN_TO_BE_REPLACED

KOROPY, Ukraine — Four men tugged at long strips of fabric to lift a coffin out of the gaping hole in the backyard of a small house. They flung the … END_OF_DOCUMENT_TOKEN_TO_BE_REPLACED