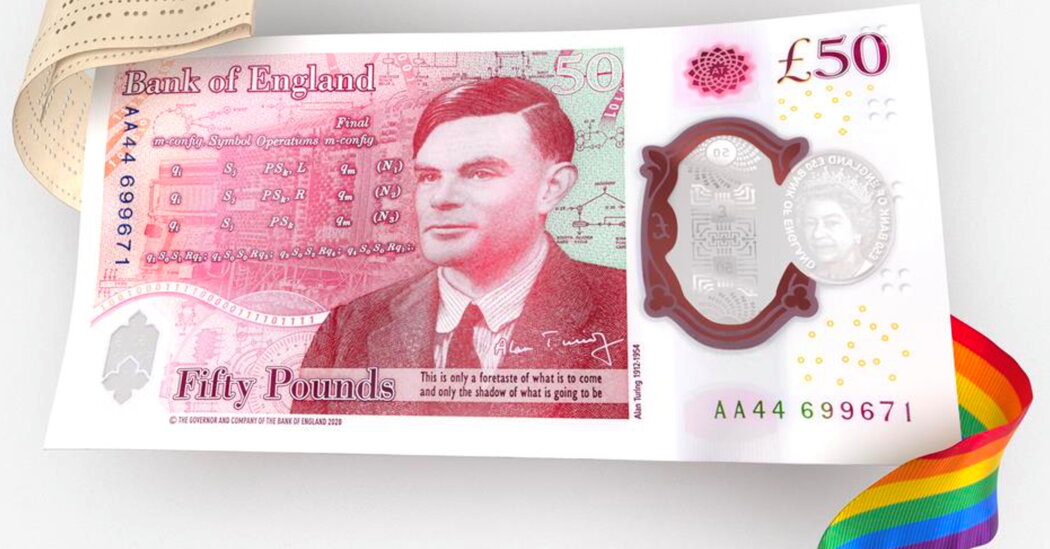 LONDON — The mathematician Alan Turing spent World War II cracking German codes, and is credited by many historians with helping to hasten the end of the conflict. But a conviction under Victorian indecency laws for his homosexuality left his postwar life in ruins.

On Thursday, the Bank of England unveiled a bill featuring Mr. Turing, one of a series of efforts by Britain in recent years to posthumously right some of the wrongs inflicted on Mr. Turing during his lifetime.

Mr. Turing’s scientific contributions embodied “the spirit of the nation” and “showed us the way to the future,” said Andrew Bailey, governor of the Bank of England, as he introduced the bill. “By placing him on this new £50 bank note, we celebrate him for his achievements and the values he symbolizes, for which we can all be very proud.”

The new bill, worth about $68, features an image of Mr. Turing taken in 1951 by the photography studio Elliott & Fry and includes a 1949 quotation by him about one of his computer inventions: “This is only a foretaste of what is to come, and only the shadow of what is going to be.” The bill will start circulating on June 23, Mr. Turing’s birthday.

the British government apologized for the “appalling” treatment of Mr. Turing, and Queen Elizabeth II granted him a royal pardon in 2013. A law in his name, which pardoned men convicted in the past for homosexuality, was passed in 2017.

The Bank of England announced in 2019 that it had chosen Mr. Turing for the £50 bill. The bill was last overhauled in 2011 to feature James Watt, who helped develop the steam engine, and Matthew Boulton, his backer.

Paper currency in Britain has Queen Elizabeth’s face on one side, and honors different notables from British history on the other, depending on the denomination.

Ada Lovelace; the physician Stephen Hawking; and Margaret Thatcher, the former prime minister. The new bill will be made out of a polymer, which allows for more security measures and makes it harder to counterfeit.

Mr. Bailey, the bank’s governor, on Monday applauded Mr. Turing as “someone who, not content with abstract ideas, applied himself to the physical embodiment of those ideas,” adding, “from his sheer force of will came enormous leaps of progress.”

Mr. Turing’s face on the bill marked a “landmark moment in our history,” Jeremy Fleming, director of GCHQ, a government intelligence and security organization, said in a statement about the design. The honor celebrated Mr. Turing’s scientific genius and “confirms his status as one of the most iconic L.G.B.T.+ figures in the world.”

You were seeing double this week: A spectacular $54 million compound featuring two equally luxurious mansions separated by a private lake in Southwest … END_OF_DOCUMENT_TOKEN_TO_BE_REPLACED