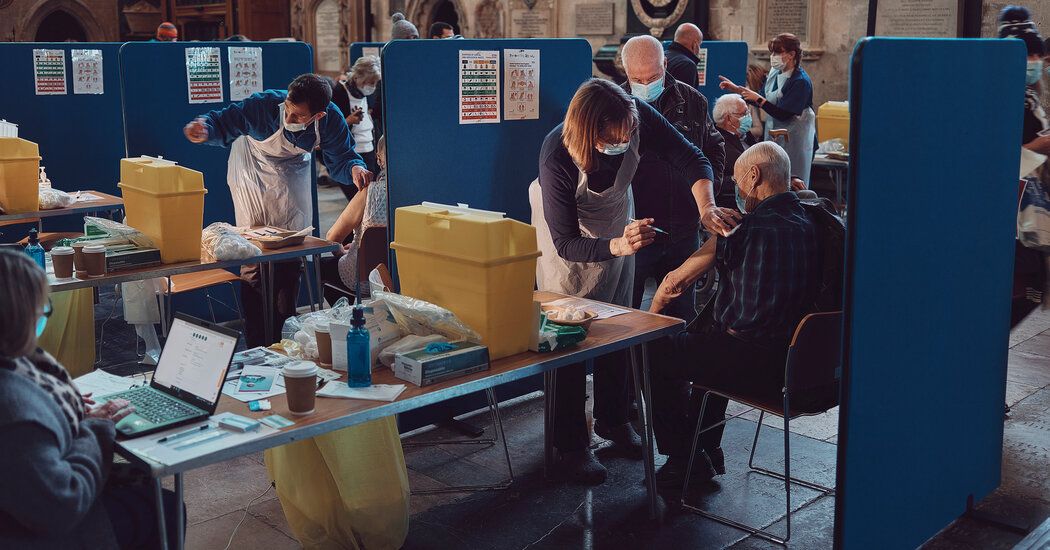 The global leaders in Covid-19 vaccination rates are Israel and the United Arab Emirates. After them come a handful of countries that have each given between 30 and 45 shots for every 100 residents, including the United States, Britain, Bahrain, Chile and Serbia.

maximized the number of people who receive one “jab,” as the British call it — and has delayed the second jab, often for about three months.

Kate Bingham, a venture capitalist who led the committee that advised the British government on vaccination, has described the strategy this way: “I think it’s the right public health response, which is to show that you try and vaccinate as many people as possible, as soon as possible. Better to protect everybody a bit rather than to vaccinate fewer people to give them an extra 10 percent protection.”

Dr. Robert Wachter of the University of California, San Francisco, has written, “According to most vaccine experts, delaying shot #2 by a few months is unlikely to materially diminish the ultimate effectiveness of two shots.”

In Britain, the daily number of new Covid cases has fallen by more than 90 percent since peaking in early January. The decline is larger than in virtually any other country. (In the U.S., new cases have fallen 79 percent since January.) Given that the contagious B.1.1.7 variant was first discovered in Britain and is now the country’s dominant virus form, “Britain’s free-fall in cases is all the more impressive,” Wachter told me. “Clearly their vaccination strategy has been highly effective.”

lives saved; it also reduces the chances of future outbreaks: The fewer people who have Covid, the fewer who can infect somebody else. That’s especially important when more contagious variants are circulating. Worldwide, the number of confirmed new cases has risen 21 percent over the past month.

about 2.5 million shots a day, up from about 800,000 in mid-January. But the federal government will soon be receiving closer to four million shots a day from the vaccine makers. A big question is whether the Biden administration and state governments will be able to continue increasing the pace at which people are getting shots in their arms.

All of this comes with the usual caveat: If the data changes, the lessons should change, too. Based on the current evidence, though, Britain appears to have landed on the most effective vaccination strategy — which is yet another sign of how powerful the vaccines are.

The latest: A delay of millions of doses ordered from India will most likely slow Britain’s vaccination campaign in coming weeks.

The Times’s editorial board argues: “Nothing greases the gears of government quite like pork.” Many top Democrats and Republicans support restoring earmarks.

Neigh: A horse retreat in New Mexico offers life-changing “attunement.” But what is it?

Lives Lived: Dick Hoyt finished more than a thousand road races, but he didn’t run them alone. His partner was always his son Rick, a quadriplegic with cerebral palsy, whom he pushed in a wheelchair. Hoyt died at 80.

debating whether to keep the measure.

The old guidelines, from the Association of Art Museum Directors, allowed museums to sell items if they no longer fit an institution’s mission and if the proceeds went to buy other art, not to pay staff salaries or other bills.

Museums that favor keeping the new arrangement say it’s necessary for their long-term survival. “It’s misinformed to think that every museum has a board full of billionaires,” said Anne Pasternak, the director of the Brooklyn Museum. During the pandemic, the Brooklyn Museum has raised nearly $35 million at auction sales.

Last month, even the Met — the largest museum in the U.S. — said it might sell items to help underwrite the salaries of staffers involved in collection care.

Those opposed to the continuation of these sales argue that they undermine museums’ mission. “If you want to flip paintings, there are many other types of institutions where you can do that,” Erik Neil of the Chrysler Museum of Art in Norfolk, Va., told The Times. “And they are called commercial galleries.”

Time,” one of the company’s first feature-length documentaries, and the Op-Doc “Alone.”

Today’s episode of “The Daily” is about Gov. Andrew Cuomo. On “Still Processing,” Jenna Wortham and Wesley Morris discuss a toxic racial slur.

Lalena Fisher, Claire Moses, Ian Prasad Philbrick, Tom Wright-Piersanti and Sanam Yar contributed to The Morning. You can reach the team at themorning@nytimes.com.

DONETSK REGION, Ukraine — Between the cracks of mortar fire and the metallic bangs of Russian self-detonating mines, Yurii, a Ukrainian Army medic, … END_OF_DOCUMENT_TOKEN_TO_BE_REPLACED

SAN FRANCISCO — Cleve Jones has lived in the Castro neighborhood for nearly 50 years, almost from the day he graduated from high school in Phoenix and … END_OF_DOCUMENT_TOKEN_TO_BE_REPLACED