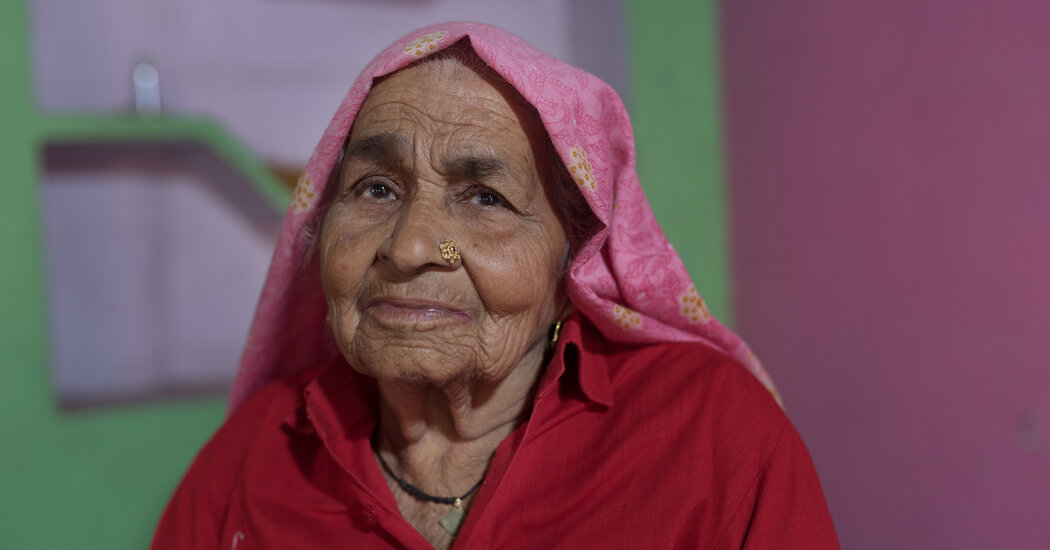 NEW DELHI — Chandro Tomar first picked up a gun when she was around 68.

Until then, she had led a quiet life in Johri, a village in the state of Uttar Pradesh, one of the most conservative regions in India. She spent her days on household chores — milking cows, cutting the grass, grinding wheat and mopping the floors of the large home she shared with her extended family.

But a trip to a local shooting range with her granddaughter Shefali, who was 12 at the time, changed everything. She discovered that she had a gift for shooting. A coach at the range encouraged her to practice, and she returned to the range each week with Shefali, under the guise of chaperoning her.

The two took turns firing the air pistol. Mrs. Tomar trained each night after her family had gone to sleep, holding up heavy jugs so she could keep her arm steady. A few months after she first picked up a gun, she competed in a regional championship and won a silver medal. (Shefali won a gold medal at the same tournament.) Her family found out about her achievement only when a local newspaper published an article about her.

“My husband and his brothers were very angry,” Mrs. Tomar recalled in a recent interview. “They said, ‘What will people think? An old lady of your age going out to shoot guns? You should be looking after your grandchildren.’”

“I listened to them quietly,” she said, “but I decided to keep going no matter what.”

Mrs. Tomar, usually wearing a long skirt, blouse and head scarf, continued to compete well into her 80s in shooting contests, often against men with military backgrounds. She eventually won more than 25 medals.

Mrs. Tomar, who was born in 1931, died on April 30 at a hospital in the town of Meerut, near her village, said Sumit Rathi, her granddaughter Shefali’s husband. She had been hospitalized for a gastrointestinal disorder and then suffered a brain hemorrhage, he said.

Along with Shefali, she is survived by two sons, Vinod and Omveer; three daughters, Savita, Kaushal and Dharambiri; nine other grandchildren; and three great-grandchildren. Her husband, Bhawar Singh Tomar, died before her.

Mr. Tomar never saw his wife compete, and he and his brothers eventually began ignoring her new interest. “That was fine with me,” she said.

Mrs. Tomar was proudest of her work as a coach and mentor to hundreds of young women around the country. She persuaded families in Johri to send their young daughters to shooting ranges to learn the sport, often going door to door to talk to reluctant parents.

Today, her area of western Uttar Pradesh has dozens of shooting clubs, and hundreds of children take the sport seriously. For many of them, it’s a ticket to a better life and a job with the Indian Army or security forces. All of her grandchildren have competed at the national level, although only Shefali still does.

Chandro Malik was born into a large farming family, the only daughter among five siblings. She never went to school. She married Mr. Tomar at 15 and spent the next 50 years raising her family.

Her defiance of patriarchal and social norms and her determination to keep trying new things inspired countless people in her village and beyond. She was known fondly in India as “Shooter Dadi” (“Shooter Grandma”). In her later years, she traveled across the country to speak about female empowerment, until the pandemic forced her to stay home.

Her children and grandchildren fulfilled one of her dreams by building an indoor shooting range, for underprivileged children, in a section of their home. It opened last month.

“Dadi was happiest when she was teaching a new generation and firing at targets,” Mr. Rathi said, “and we plan to continue her life’s mission.”

MUSCATINE, Iowa--(BUSINESS WIRE)--HNI Corporation (NYSE: HNI) announced today its Board of Directors declared a quarterly dividend of 32 cents per … END_OF_DOCUMENT_TOKEN_TO_BE_REPLACED

Tokyo (CNN) — The Japan Tourism Agency announced on Tuesday, May 17 that it would start allowing small group tours in May as part of a "test tourism" … END_OF_DOCUMENT_TOKEN_TO_BE_REPLACED

If you’re superstitious, today is your day.That's because it's Friday the 13th (the only one of the year, in fact). It's a day when bad juju reigns … END_OF_DOCUMENT_TOKEN_TO_BE_REPLACED