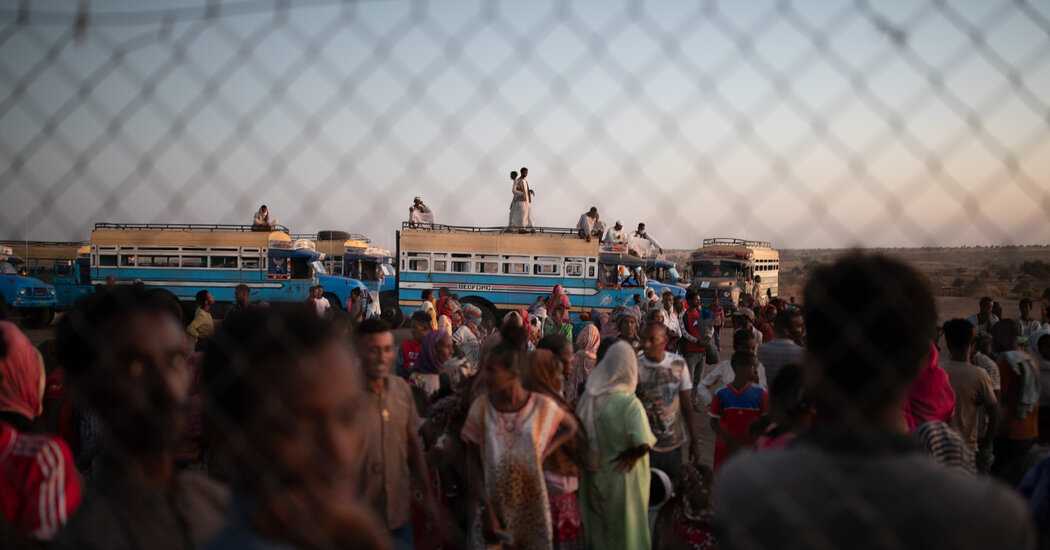 NAIROBI, Kenya — Growing American frustration over the war in the Tigray region of Ethiopia spilled over into an open confrontation on Monday when Ethiopian officials lashed out at Washington over new restrictions including aid cuts and a ban on some Ethiopians traveling to the United States.

The restrictions, announced by Secretary of State Antony J. Blinken on Sunday, amount to an unusual step against a key African ally, and a pointed rebuke to Prime Minister Abiy Ahmed, a Nobel Peace Prize winner whose troops and allies have been accused of ethnic cleansing, massacres and others atrocities that could amount to war crimes.

Despite “significant diplomatic engagement,” Mr. Blinken said in a statement, “the parties to the conflict in Tigray have taken no meaningful steps to end hostilities or pursue a peaceful resolution of the political crisis.”

American visa restrictions will apply to all actors in the Tigray conflict, Mr. Blinken said, including current and former Ethiopian and Eritrean officials, ethnic Amhara militias and Tigrayan rebels.

a statement on Monday, Ethiopia’s foreign affairs ministry reacted with an expression of regret and what appeared to be thinly veiled threats. It accused the United States of meddling in its internal affairs and trying to overshadow national elections scheduled for June 21.

And it said that Ethiopia could be “forced to reassess its relations with the United States, which might have implications beyond our bilateral relationship.”

gave $923 million, according to USAID, although the vast majority of that money was for humanitarian purposes — health care, food aid, education and democracy support — that will not be hit by the new measures.

The United States had already suspended $23 million in security aid to Ethiopia. Officials say the new measures will preclude any American arms sales to Ethiopia, although much of the country’s weapons come from Russia.

Still, there could be other impacts. Western diplomats say the United States could block international funding to Ethiopia from the World Bank and International Monetary Fund — integral to Mr. Abiy’s economic plans.

dispatched by President Biden in March, and Jeffrey Feltman, the recently appointed Horn of Africa envoy.

American officials worry that the growing chaos in Tigray could destabilize the entire Horn of Africa region, or jeopardize efforts to mediate a high-stakes dispute with Egypt over the massive hydroelectric dam that Ethiopia is building on the Nile.

The growing humanitarian crisis, including the threat of a famine within months, is also driving the sense of urgency.

Those responsible for the Tigray crisis “should anticipate further actions from the United States and the international community,” Mr. Blinken said. “We call on other governments to join is taking these measures.”

AUSTIN, Texas--(BUSINESS WIRE)--As the first multifamily management company to be recognized in the Public Relations and Marketing Excellence Awards, … END_OF_DOCUMENT_TOKEN_TO_BE_REPLACED

There have been whispers of cooling housing and rental prices in the San Francisco Bay Area, but that hasn't yet translated into practical, noticeable … END_OF_DOCUMENT_TOKEN_TO_BE_REPLACED

Cars pass in Independence Square at twilight in Kyiv, Ukraine, Monday, Oct. 31, 2022. Rolling ... [+] blackouts are increasing across Ukraine as the … END_OF_DOCUMENT_TOKEN_TO_BE_REPLACED