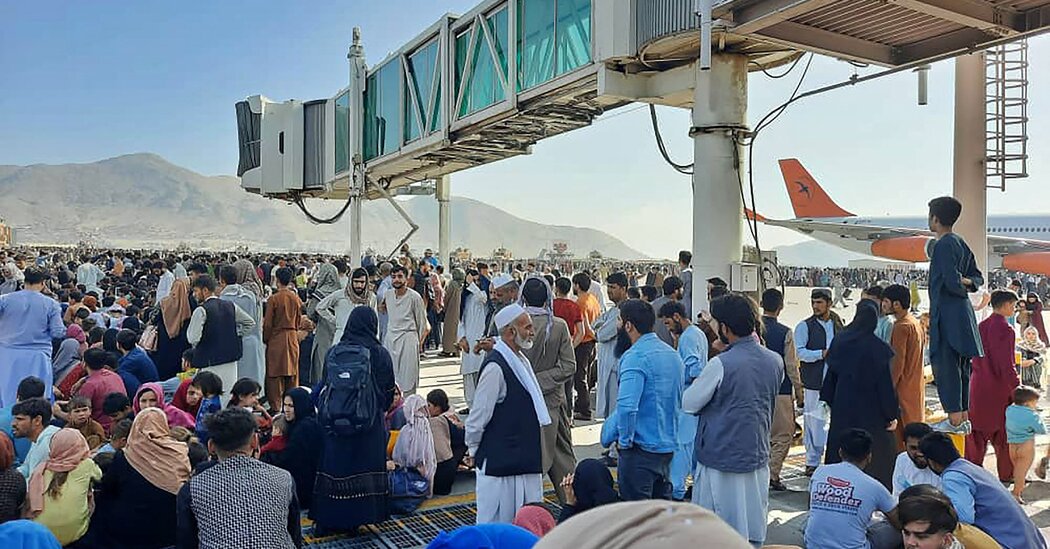 ISTANBUL — Thousands of desperate Afghans trying to escape the Taliban takeover swarmed Kabul’s main international airport on Monday, rushing the boarding gates, mobbing the runways, clambering atop the wings of jets and even trying to cling to the fuselage of departing American military planes.

At least half a dozen Afghans were killed in the chaos, some falling from the skies as they lost their grasp, and at least two shot by American soldiers trying to contain the surging crowds.

As American troops sought to manage the exodus, seizing air traffic control to prioritize military flights evacuating Western citizens and flying Apache helicopters low over the crowds to clear the runway, Taliban fighters capped a swift and devastating lunge for power, posing for an iconic photo behind the ornate presidential desk in the presidential palace hours after President Ashraf Ghani had fled the country.

quickly circulated around the world, seemed to speak louder than words.

In one extraordinary scene filmed by Afghan media, hundreds of people ran alongside an American military C-17 cargo plane and some tried to climb into the wheel wells or cling to the sides of the plane as it gathered speed, a striking symbol of America’s military might flying away even as Afghans hung on against all hope.

said that in the coming days it would evacuate thousands of American citizens, embassy employees and their families, and “particularly vulnerable Afghan nationals.”

The State Department said the United States evacuated 1,600 people from Afghanistan over the weekend, bringing the total number of people flown out to 3,600 since mid-July. The Pentagon said Monday evening that in the previous 48 hours some 700 Afghans who worked with the United States, along with their families, had been evacuated. The Pentagon is hoping to evacuate up to 5,000 people per day by later this week.

Other countries were also scrambling to evacuate their citizens. British officials said they were confident that they could remove some 3,000 Britons thought to be in Afghanistan but they said they were less sure about being able to provide a safe exit to the Afghans who aided the British and whose lives could now be at risk.

video posted on Facebook a Taliban commander driving a government police pickup truck outside the airport was asked about the hundreds of people seeking to fly out of the country. “They should not go,” he answered. “We will be here and we will bring peace and security now that we have left the corrupt regime behind us.”

A sample of the fantasti Filipino food at London's Kasa & Kin and Romulo CafeKasa & KinGrowing up between the UK and US, I found it extremely … END_OF_DOCUMENT_TOKEN_TO_BE_REPLACED