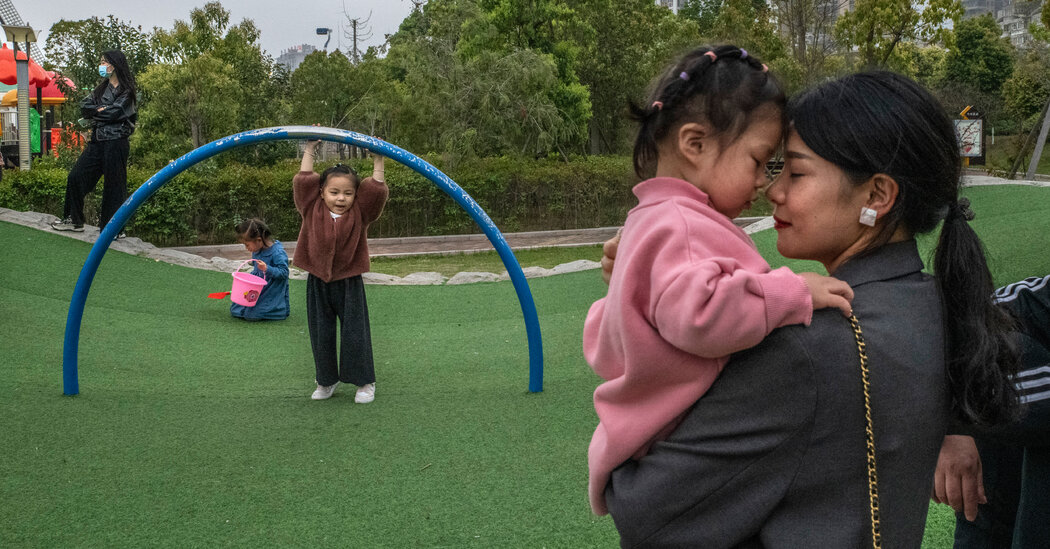 China said on Monday that it would allow all married couples to have three children, ending a two-child policy that has failed to raise the country’s declining birthrates and avert a demographic crisis.

The announcement by the ruling Communist Party represents an acknowledgment that its limits on reproduction, the world’s toughest, have jeopardized the country’s future. The labor pool is shrinking and the population is graying, threatening the industrial strategy that China has used for decades to emerge from poverty to become an economic powerhouse.

But it is far from clear that relaxing the policy further will pay off. People in China have responded coolly to the party’s earlier move, in 2016, to allow couples to have two children. To them, such measures do little to assuage their anxiety over the rising cost of education and of supporting aging parents, made worse by the lack of day care and the pervasive culture of long work hours.

In a nod to those concerns, the party also indicated on Monday that it would improve maternity leave and workplace protections, pledging to make it easier for couples to have more children. But those protections are all but absent for single mothers in China, who despite the push for more children still lack access to benefits.

when the number of babies born dropped to the lowest since the Mao era. The country’s total fertility rate — an estimate of the number of children born over a woman’s lifetime — now stands at 1.3, well below the replacement rate of 2.1, raising the possibility of a shrinking population over time.

The announcement on Monday still splits the difference between individual reproductive rights and government limits over women’s bodies. Prominent voices within China have called on the party to scrap its restrictions on births altogether. But Beijing, under Xi Jinping, the party leader who has pushed for greater control in the daily lives of the country’s 1.4 billion people, has resisted.

“Opening it up to three children is far from enough,” said Huang Wenzheng, a demography expert with the Center for China and Globalization, a Beijing-based research center. “It should be fully liberalized, and giving birth should be strongly encouraged.”

“This should be regarded as a crisis for the survival of the Chinese nation, even beyond the pandemic and other environmental issues,” Mr. Huang added. “There should never have been a birth restriction policy in the first place. So it’s not a question of whether this is too late.”

The party made the announcement after a meeting by the Politburo, a top decision-making body, though it was not immediately clear when the change would take effect. In an acknowledgment that raising the birth limits might not be enough, the party also pledged to beef up support for families, though it did not provide details.

But more couples now embrace the concept that one child is enough, a cultural shift that has dragged down birthrates. And some say they are not interested in children at all, even after the latest announcement.

“No matter how many babies they open it up to, I’m not going to have any because children are too troublesome and expensive,” said Li Shan, a 26-year-old product manager at an internet company in Beijing. “I’m impatient and worried that I won’t be able to educate the child well.”

forcing women of Muslim ethnic minorities, like the Uyghurs, to have fewer babies in an effort to suppress their population growth.

A full reversal of the rules could also be seen as a repudiation of a deeply unpopular policy that the party has long defended.

“If a government makes a U-turn today in the West, it’s kind of embarrassing,” said Stuart Gietel-Basten, a professor of social science and public policy at the Hong Kong University of Science and Technology. “But in a country like China, where the same party has been in charge for 70 years or so, then it makes a statement on the policies that were implemented. And so that’s why I think any change that goes through will be quite gradual.”

For decades, China’s family-planning restrictions empowered the authorities to impose fines on most couples who had more than one child and compel hundreds of millions of Chinese women to undergo invasive procedures.

Gao Bin, a 27-year-old seller of lottery tickets in the eastern city of Qingdao, recalled how his mother had to flee to three different places just to escape family-planning officials because she wanted to keep him. He said that his mother still cries when she recounts those days.

“To be honest, when I saw the announcement of this policy, I was pretty angry,” Mr. Gao said. “I think the government lacks a humane attitude when it comes to fertility.”

AUSTIN, Texas--(BUSINESS WIRE)--As the first multifamily management company to be recognized in the Public Relations and Marketing Excellence Awards, … END_OF_DOCUMENT_TOKEN_TO_BE_REPLACED

There have been whispers of cooling housing and rental prices in the San Francisco Bay Area, but that hasn't yet translated into practical, noticeable … END_OF_DOCUMENT_TOKEN_TO_BE_REPLACED

Cars pass in Independence Square at twilight in Kyiv, Ukraine, Monday, Oct. 31, 2022. Rolling ... [+] blackouts are increasing across Ukraine as the … END_OF_DOCUMENT_TOKEN_TO_BE_REPLACED