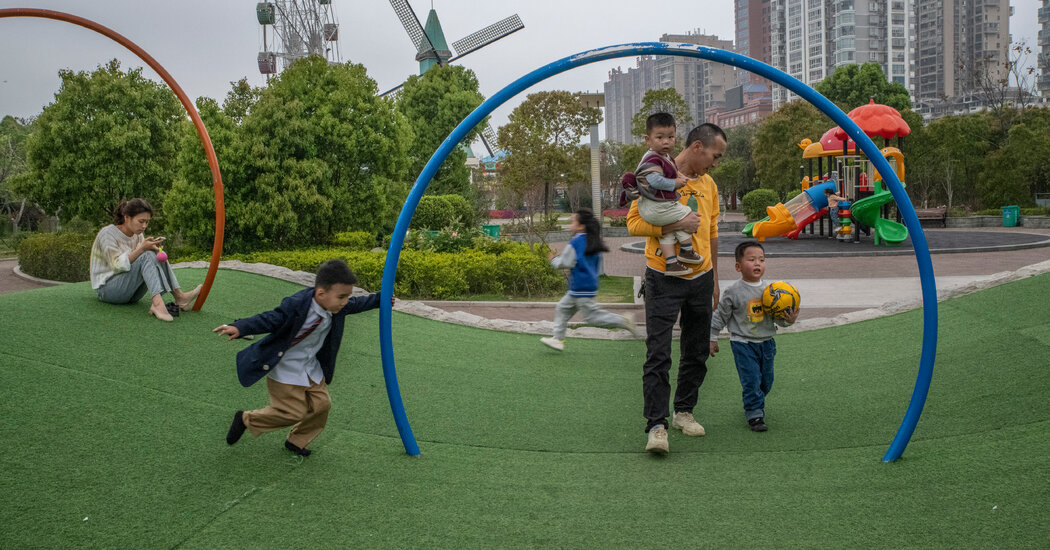 When Fan Jianhua had her third daughter last April, she was afraid that she would be fined for violating China’s birth limits.

Ms. Fan was already heavily in debt paying for treatment for her 6-year-old, who has leukemia. To her relief, when she registered her new baby with the police, she didn’t have to pay the $7,500 fine.

“I was really happy and could finally relax,” said Ms. Fan, 34, a stay-at-home mother in the central city of Danjiangkou, in Hubei Province.

Slowly, in fits and starts, China’s ruling Communist Party is loosening its long-held restrictions over childbirth and women’s bodies. Some local governments have tacitly allowed couples to have more than two children. Beijing has said civil servants will no longer be fired for such infringements. Party leaders have pledged to make population policies more inclusive, a signal that some have taken to mean the rules will be eased further.

decline in birthrates. A once-a-decade population census, released on Tuesday, showed that the number of births last year fell to the lowest since the Mao era. Low fertility translates to fewer workers and weaker demand, which could stunt growth in the world’s second-largest economy.

But the party is wary of giving up control and has resisted scrapping birth restrictions wholesale. Instead, Beijing has been taking a piecemeal approach by slowly dismantling the once-powerful family-planning bureaucracy and carving out exemptions. In many places, police officers, employers and city officials are deciding how strictly, or loosely, to enforce the rules.

That can mean more freedom for some, like Ms. Fan, to have more children. But it also creates uncertainty about the risks, adding to a reluctance about having more children.

The strategy could also founder amid broad cultural changes. Anxiety over the rising cost of education, housing and health care is now deeply ingrained in society. Many Chinese simply prefer smaller families, and the government’s efforts to boost the birthrate, including introducing a two-child policy in 2016, have largely fizzled.

“If the restrictions on family planning are not lifted, and they are encouraging births at the same time, this is self-contradictory,” said Huang Wenzheng, a demography expert with the Center for China and Globalization, a Beijing-based research center. He said that removing all birth limits would convey an important message. “I think such a step has to be taken.”

official murmurs about a reconsideration of the one-child policy surfaced but were quickly dismissed. It took years before the government moved to allow all couples to have two children.

Now, the population is aging more rapidly than those of many developed countries, including the United States, and some argue that the government cannot afford to keep any restrictions on procreation.

“We have to take advantage of the fact that a certain number of residents now are willing to give birth but aren’t allowed to,” China’s central bank said in a working paper it published on April 14. “If we wait to lift it when no one wants to give birth, it will be useless.”

harshly enforced family-planning rules in what Beijing has depicted as a fight against religious extremism. The campaign has led in recent years to a rise in sterilizations and contraceptive procedures — forcibly imposed in some cases — in the region’s Muslim-dominated areas.

China’s family-planning policy has long given local officials a powerful weapon of control — one that may be hard, or costly, to wrest back. Before they were unwound, family-planning agencies hired around eight million people, down to the village level, who corralled women to be fitted with intrauterine devices or coerced them into abortions.

The officials also collected large fines from couples who broke the rules. One senior researcher at the Central Party School estimated in 2015 that the fees amounted to between $3 billion and $5 billion annually.

In recent years, the government has been reassigning family-planning employees to roles including in population research and tackling Covid-19. But local governments retain the power to enforce birth limits as they see fit, which has led to inconsistencies.

The central government said in May last year that civil servants did not have to lose their jobs for violating birth limits, yet months later, a village committee in the eastern city of Hangzhou fired a woman after she had a third child — prompting a public outcry.

Ultimately, the fate of China’s family-planning policies may change little. A generation of highly educated women are putting off marriage and childbirth for other reasons, including a rejection of traditional attitudes that dictate women should bear most of the responsibility of raising children and doing housework.

Liu Qing, a 38-year-old editor of children’s books in Beijing, said getting married and having children were never in her future because they would come at too great a personal cost.

“All the things that you want — your ideals and your ambitions — have to be sacrificed,” Ms. Liu said.

“I’m furious about this environment,” she said. “I’m not the kind of person who would accept this reality and compromise. I just won’t.”

For other Chinese, having fewer children is a matter of necessity when holes in the country’s social safety net mean that a major illness can lead to financial ruin.

Ms. Fan, the woman in Hubei who was spared a fine, said that she and her husband, a laborer, were getting increasingly desperate. Public health insurance had covered half the cost of her daughter’s treatment for leukemia, but they were on the hook for $76,000.

She had a third child only because she heard that a sibling’s cord blood could help in the treatment of leukemia. But she later learned that such treatment would cost more than $100,000.

“I don’t dare think about the future,” Ms. Fan said. She added that if her daughter’s condition deteriorated or they went broke, they would have to give up treatment.

“We can only leave it up to her fate,” she said.

AUSTIN, Texas--(BUSINESS WIRE)--As the first multifamily management company to be recognized in the Public Relations and Marketing Excellence Awards, … END_OF_DOCUMENT_TOKEN_TO_BE_REPLACED

There have been whispers of cooling housing and rental prices in the San Francisco Bay Area, but that hasn't yet translated into practical, noticeable … END_OF_DOCUMENT_TOKEN_TO_BE_REPLACED

Cars pass in Independence Square at twilight in Kyiv, Ukraine, Monday, Oct. 31, 2022. Rolling ... [+] blackouts are increasing across Ukraine as the … END_OF_DOCUMENT_TOKEN_TO_BE_REPLACED