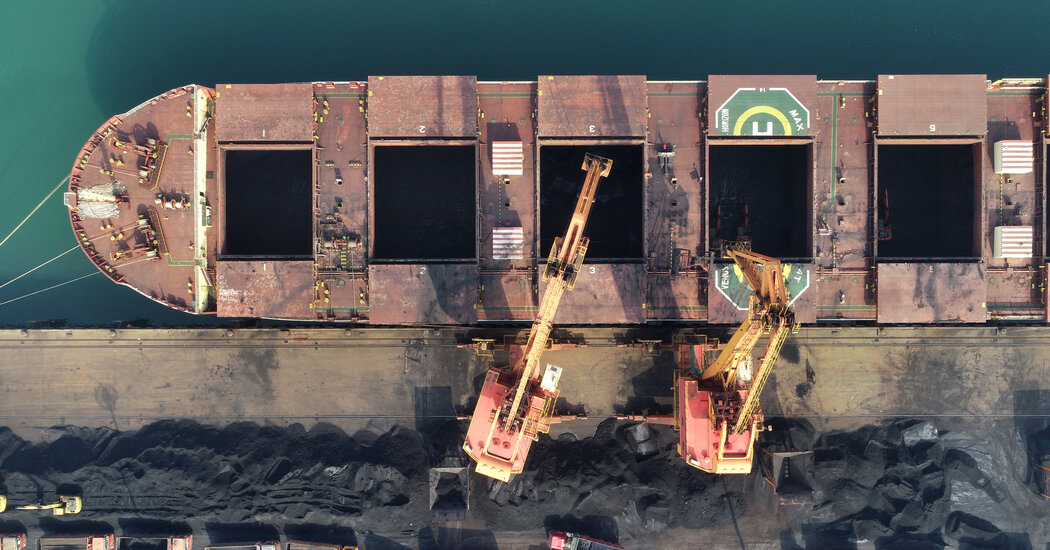 The big issue is coal.

Mr. Xi’s climate-saving ambitions are a pillar of a plan for the country’s post-pandemic ascent that was endorsed by China’s Communist Party-controlled legislature days ago.

The plan is designed to steer the country toward two signature commitments that Mr. Xi made last year. China’s emissions of carbon dioxide would peak before 2030, he said, and the country would reach net carbon neutrality before 2060, meaning it would emit no more of the greenhouse gas than it takes from the atmosphere by methods like engineering or planting forests.

But unusually sharp debate has risen in China over how aggressively it should cut the use of coal, which has fueled its industrial takeoff yet made it the world’s top-polluting nation in recent decades.

Leon Clarke, a professor at the University of Maryland and a leading co-author of a recent study on China’s options for curtailing emissions. “On the one side, there’s a sense that coal has driven the economy and you don’t want to give that up. On the other hand, coal is the biggest target for climate action, particularly in the near term.”

China’s environmental pressures were brought to life last week as a thick smog hung over Beijing, reflecting an uptick in industrial pollution.

28 percent of the global total, roughly the same as the next three biggest emitters combined: the United States, the European Union and India. The accumulated emissions of the United States and other rich economies across the entire industrial era, though, remain much bigger than China’s.

Representatives of the coal industry attending the national legislative session in Beijing argued that China needs to keep burning coal, albeit in cleaner, more efficient plants.

The China National Coal Association issued a report this month proposing modest increases in its use for the next five years, reaching 4.2 billion metric tons by 2025, and also said China should create three to five “globally competitive world-class coal enterprises.”

“The principal status of coal in our national energy system, and its role as ballast, will not shift,” the association said in an earlier position paper about the industry’s outlook in the next five years.

Provincial governments have recently proposed more new coal mines and power plants, while vowing that their projects will limit emissions. In answer to the call for a carbon peak, Shanxi Province, one of China’s biggest coal producing areas, announced plans for 40 “green,” efficient coal mines.

Chinese officials in such areas also worry about losses of jobs and investment and the resulting social strains. They argue that China still needs coal to provide a robust base of power to complement solar, wind and hydropower sources, which are more prone to fluctuating. And many energy companies backing these views are state-owned behemoths that have easy access to political leaders.

Center for Research on Energy and Clean Air in Helsinki. “The central contradiction between expanding the smokestack economy and promoting green growth appears unresolved.”

China’s new plan appears to give the different camps in the carbon debate a foothold. The plan promises green growth and expansion of hydro, solar and wind power, in addition to nuclear power plant construction. By 2025, the plan says, non-fossil fuel sources will provide one-fifth of China’s energy.

Yet the plan also appeared to hearten defenders of coal and disappoint environmental groups and climate policy experts. It did not include an absolute ceiling on annual carbon dioxide emissions and indicated that coal-fired power stations would keep being built.

“Many areas still believe that before 2030 they can keep substantially increasing fossil fuel use,” Wang Jinnan, the president of the government’s Chinese Academy of Environmental Planning and a senior member of the national legislature, said in an interview with a Chinese magazine posted on the academy’s website. “This will have a big negative impact on China reaching carbon neutrality before 2060.”

Mr. Xi may face calls from abroad to offer more ways to curb emissions as China turns the plan into actual policies. For China, action on climate change is also a way of building good will, including with the United States and the European Union.

international pact to limit global warming this century to below 2 degrees Celsius (3.6 degrees Fahrenheit), and to 1.5 degrees Celsius if possible, is not possible without more urgent efforts from China and the other major powers to reach carbon neutrality by around midcentury.

“The longer the delay, the harder it is to achieve those midcentury targets. It’s just math,” said Kelly Sims Gallagher, a professor at the Fletcher School of Tufts University who studies China’s climate policies. China’s plan, she said, “will not have the effect of injecting new momentum into the global climate negotiations.”

Mr. Xi has a political stake in the issues. He has promoted himself and China as guardians of an “ecological civilization” and has made cleaning China’s air, water and soil a basis for public appeal. When he announced China’s pledge last year to curtail greenhouse gas emissions, he also called for a “green recovery” from the Covid-19 pandemic.

“Environmental protection has not been given the high priority it should be accorded,” the inspectors wrote in their report on the administration. They criticized the administration for letting coal power projects go ahead in eastern China, where stringent pollution limits are supposed to apply. In recent days, the environmental authorities also cracked down on steel makers in Tangshan, a northern industrial city, that were found breaking pollution curbs, including submitting fake data.

to the Rhodium Group, an economic research firm.

To transit away from coal, China must confront the costs of closing mines and plants, including the needs of millions of potentially displaced miners and other workers. Many coal-dependent regions and their workers seem unprepared for that possible shift.

“The government close down a mine because of global warming? I don’t think that’s possible,” he said. “I’ve never heard of that reason.”

The poshest place in California's Coachella Valley is The Madison Club. This exclusive gated community in La Quinta is where A-listers and tycoons … END_OF_DOCUMENT_TOKEN_TO_BE_REPLACED

KOROPY, Ukraine — Four men tugged at long strips of fabric to lift a coffin out of the gaping hole in the backyard of a small house. They flung the … END_OF_DOCUMENT_TOKEN_TO_BE_REPLACED