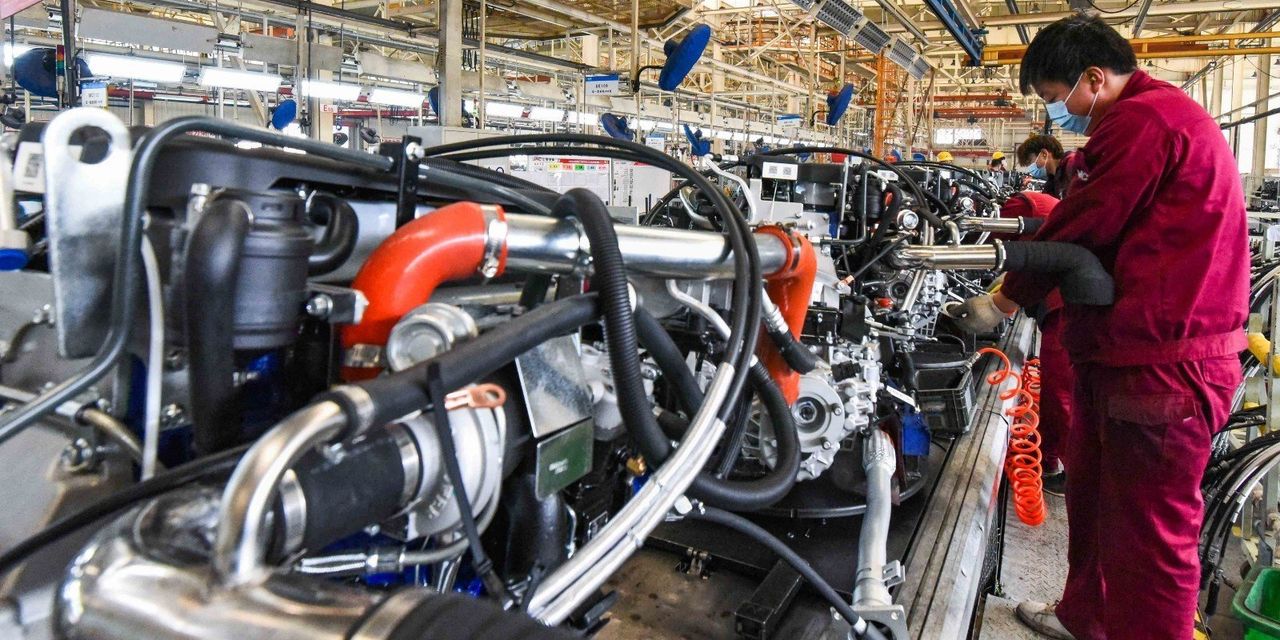 BEIJING—Chinese economic activity surged in the first two months of 2021 when compared with the same coronavirus-battered period last year, though the picture was less rosy when weighed against growth momentum in the final months of 2020.

Economic data released Monday by China’s National Bureau of Statistics showed industrial production, consumption, investment and home sales in January and February all jumping by more than 30% from the same period a year earlier, when the Chinese economy was largely shut down to contain the fast-spreading coronavirus.

Industrial output in the January-February period rose 35.1% from a year earlier while retail sales, a major gauge of China’s consumption, expanded 33.8% over that same time frame. Both indicators topped economists’ expectations.

Home sales by volume, an indicator of demand, soared 143.5% in the first two months of 2021 from a year earlier, while property investment by value gained 38.3% over the same stretch.

Fixed-asset investment increased 35.0% over that period compared with a year earlier, though economists had predicted faster growth, especially in manufacturing investment.

Beijing has begun reporting the two months’ data together to strip out the impact of the Lunar New Year holiday, the timing of which varies from year to year.

Taken together, the readings reflect continued recovery in the world’s second-largest economy, though one that slowed somewhat starting in January amid a fresh wave of virus controls.

The dramatic year-over-year economic gains are likely to continue in the coming months as China reports other indicators. Economists say the early 2020 troughs providing a lower basis for comparison will likely linger until the second half of the year.

Officials noted Monday that, for all the statistical volatility of the past year, the economic levels for January and February this year were higher than those for the first two months of 2019, well before China’s economy was walloped by the emerging pandemic.

Industrial output in the January-February period increased by 16.9% compared with the same period in 2019, while retail sales were 6.4% higher, the statistics bureau said.

Even so, Monday’s economic numbers suggested that slowing momentum in consumption and manufacturing investment from the final months of 2020 could keep the durability of the recovery at the top of Chinese policy makers’ minds as they look to withdraw some of their pandemic stimulus efforts.

For the full year, Beijing has set a relatively modest growth target of 6% or more, giving itself room to unwind stimulus and rein in debt. Many economists say China’s economy could grow by 8% or more in 2021, even with tighter fiscal and monetary policies.

Since China’s major economic indicators plunged by double-digit percentage points in year-over-year terms this time last year, the economy has largely roared back, led by manufacturing and exports.

Coming into 2021, China’s factory production continued to be buoyed by strong external demand and government policies that encouraged workers to stay at their workplaces rather than return home for this year’s Lunar New Year. Those policies had the dual effect of containing infections and boosting production.

A survey of 5,000 factories by China’s statistics bureau found more than half of respondents reporting 90% or more of their workers staying put this year, Liu Aihua, a spokeswoman for the bureau, said in a briefing Monday.

Earlier this month, China reported its exports surged more than 60% in the first two months of 2021 compared with a year earlier, significantly higher than market expectations.

The recent months’ travel restrictions and the health concerns that underpinned the tightened travel rules, however, had the opposite effect on restaurant and in-store retail consumption, Ms. Liu said. Despite the strong year-over-year gains in retail sales, the most recent data represented a cooling-off from the final quarter of 2020, said Ning Zhang, an economist at UBS.

Rising joblessness may also have played a role in the slowing momentum. The rise in February puts China’s urban unemployment rate at the ceiling that China’s policy makers have set for the year. Last year, Beijing set its urban unemployment target at 6.0% or less.

The number of jobless people increased at the beginning of the year as gig workers returned home for Lunar New Year and labor demand dropped during the holiday, said Mr. Zhang of UBS. As a result, he expects the rate will likely come down later this year.

But after a historically large graduating class last year, China will have an even bigger crop of 9.1 million fresh graduates to absorb into the workforce this year, serving as another test for China’s economy.

—Grace Zhu and Bingyan Wang contributed to this article.

Write to Jonathan Cheng at jonathan.cheng@wsj.com

Reuters has named Alessandra Galloni, one of the news agency’s highest-ranking editors, as its new editor in chief, the company announced Monday.Ms. … END_OF_DOCUMENT_TOKEN_TO_BE_REPLACED