Dozens were killed and several Chinese factories set ablaze in Myanmar on Sunday during the deadliest weekend since the country’s military seized power in a coup last month.

At least 38 were killed on Sunday as security forces opened fire on protesters in several cities, according to the Assistance Association for Political Prisoners, a nonprofit monitoring arrests and casualties. An estimated 13 others have been killed since Friday.

The biggest flashpoint was in Hlaing Tharyar, a poor, industrial suburb of Yangon, Myanmar’s largest city. At least 22 people were killed there, as several garment factories financed by Chinese owners were vandalized and set on fire. It couldn’t immediately be determined who started the fires.

China’s embassy in Myanmar said on Sunday that many Chinese employees were trapped inside and injured as the factories burned. It called on protesters to express their concerns lawfully and urged authorities to punish those responsible.

Nationwide protests continue despite an increasingly violent response from the country’s military authorities. At least 126 people have been killed since the coup, the Assistance Association for Political Prisoners said, as security forces have used lethal force including live fire to break up demonstrations.

The burning of factories marks the first time foreign businesses have been directly caught up in the violence. Some opponents of the coup view China as supportive of the military and have criticized Beijing for refusing to condemn the military takeover and violence against protesters.

Write to Feliz Solomon at feliz.solomon@wsj.com

“I made the case for a surge strategy. At this point that’s not being deployed, but I am not giving up,” Ms. Whitmer said last week, describing a … END_OF_DOCUMENT_TOKEN_TO_BE_REPLACED

Prince William and Prince Harry joined other members of the royal family in releasing statements honoring their grandfather, Prince Philip, who died … END_OF_DOCUMENT_TOKEN_TO_BE_REPLACED 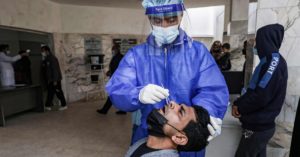 Severe and critical cases of Covid-19 have hit record highs this week in the blockaded Gaza Strip, a development that health experts attributed to the … END_OF_DOCUMENT_TOKEN_TO_BE_REPLACED