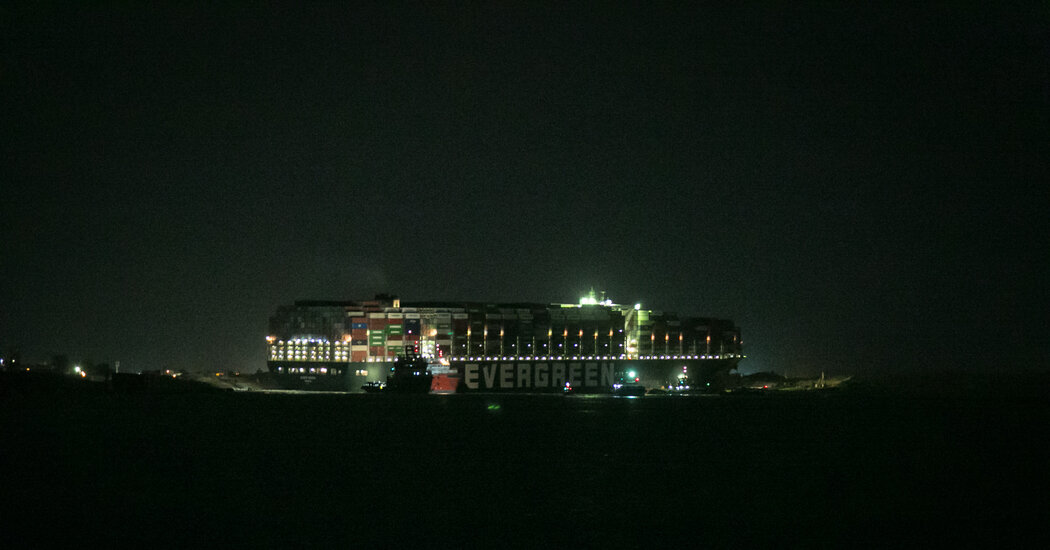 TOKYO — It took six days to prise free a giant container ship that ran aground and clogged the Suez Canal, one of the world’s most crucial shipping arteries. It could take years to sort out who will pay for the mess.

Cargo companies, insurers, government authorities and a phalanx of lawyers, all with different agendas and potential assessments, will not only need to determine the total damage, but also what went wrong. When they eventually finish digging through the morass, the insurers of the ship’s Japanese owner are likely to bear the brunt of the financial pain.

The costs could add up quickly.

There are the repairs for any physical damage to the Ever Given, the quarter-mile-long ship that got stuck in the Suez. There is the bill for the tugboats and front-end loaders that dug the beached vessel out from the mud. The authority that operates the Suez Canal has already said the crisis has cost the Egyptian government up to $90 million in lost toll revenue as hundreds of ships waited to pass through the blocked waterway or took other routes.

And the stalled ship held up as much as $10 billion of cargo a day from moving through the canal, including cars, oil, livestock, laptops, sneakers, electronics and toilet paper. Companies delivering goods may have to pay customers for missed deadlines. If any agricultural goods went bad, producers may look to recoup lost revenue.

Jeff N.K. Lee, a lawyer in Taipei who specializes in commercial and transportation law.

“While the ship is just parked there, the cargo isn’t actually being damaged,” Mr. Lee said. “The only damage is that it’s delayed.”

“Say I have a batch of cloth, and on top of the time it took to come to Taiwan, it got stuck for six or seven days,” he said. “It just sat there. Will it go bad? It won’t.”

There is a caveat. The ship’s owner could have to pay for cargo delays, if its crew is found to be at fault for the accident.

Some so-called third-party claims related to delayed cargo may be covered by yet another insurer for the ship, the UK P&I Club. The same goes for any claims by the Suez Canal Authority, which operates the waterway and might file over any loss of revenue.

Nick Shaw, chief executive of the International Group of Protection and Indemnity Clubs, the umbrella group that includes the UK P&I Club, said the insurer would “make decisions together with the shipowner as to which ones had validity and which ones are illegitimate.”

Adding to the complexity of the Suez accident are the layers upon layers of insurance. Reinsurers, companies that covers the risk of other insurance companies, come into play for claims above $100 million. Between insurance and reinsurance, the ship’s owner has coverage for those third-party claims up to $3.1 billion, although few experts believe the damages will run that high.

The sheer size of the Ever Given makes the situation all the more labyrinthine. Aside from time of war, the Suez Canal has never been blocked quite so spectacularly or for as long a time as it was with the Ever Given, and this is the biggest ship to run aground.

The ship is as long the Empire State Building is tall, with the capacity to carry 20,000 containers stacked 12 to 14 high. The Ever Given is one of a fleet of 13 in a series designed by Imabari, part of a push to lower the costs per container and make the ships more competitive in an increasingly fierce market dominated by Chinese and South Korean shipbuilders.

“The bigger the ships get, the risk is whenever you have an incident like this is that you are putting more of your eggs into one basket,” said Simon Heaney, senior manager of container research at Drewry UK, a shipping consultancy. “So the claims will magnify.”

SAN FRANCISCO — Cleve Jones has lived in the Castro neighborhood for nearly 50 years, almost from the day he graduated from high school in Phoenix and … END_OF_DOCUMENT_TOKEN_TO_BE_REPLACED

A home inspection can spare you from unpleasant surprises after you buy. After crunching the numbers, searching your favorite neighborhoods, and … END_OF_DOCUMENT_TOKEN_TO_BE_REPLACED