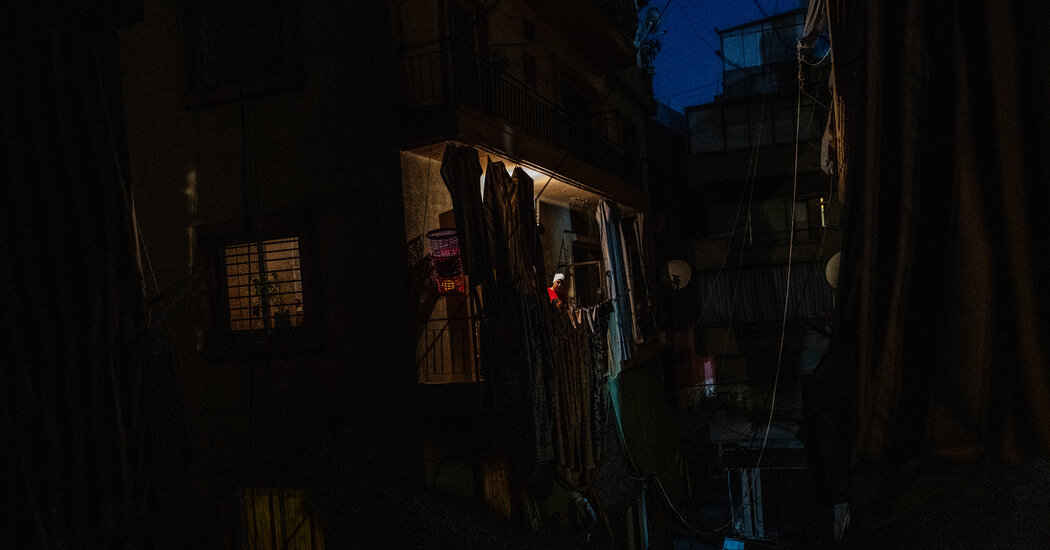 TRIPOLI, Lebanon — Rania Mustafa’s living room recalls a not-so-distant past, when the modest salary of a security guard in Lebanon could buy an air-conditioner, plush furniture and a flat-screen TV.

But as the country’s economic crisis worsened, she lost her job and watched her savings evaporate. Now, she plans to sell her furniture to pay the rent and struggles to afford food, much less electricity or a dentist to fix her 10-year-old daughter’s broken molar.

For dinner on a recent night, lit by a single cellphone, the family shared thin potato sandwiches donated by a neighbor. The girl chewed gingerly on one side of her mouth to avoid her damaged tooth.

“I have no idea how we’ll continue,” said Ms. Mustafa, 40, at home in Tripoli, Lebanon’s second-largest city, after Beirut.

The huge explosion one year ago in the port of Beirut, which killed more than 200 people and left a large swath of the capital in shambles, only added to the desperation.

and the central bank unable to keep propping up the currency, as it had for decades, because of a drop in foreign cash flows into the country. Now, the bottom has fallen out of the economy, leaving shortages of food, fuel and medicine.

All but the wealthiest Lebanese have cut meat from their diets and wait in long lines to fuel their cars, sweating through sweltering summer nights because of extended power cuts.

long lines at gas stations, where drivers wait for hours to buy only a few gallons, or none at all if the station runs out.

hampered the investigation into the port explosion, and a billionaire telecoms tycoon, Najib Mikati, is currently the third politician to try to form a government since the last cabinet resigned after the blast.

Mustafa Allouch, the deputy head of the Future Movement, a prominent political party, said, like many other Lebanese, that he feared that the political system, intended to share power between a range of sects, was incapable of addressing the country’s problems.

“I don’t think it will work anymore,” he said. “We have to look for another system, but I don’t know what it is.”

His greatest fear was “blind violence” born out of desperation and rage.

“Looting, shooting, assaults on homes and small shops,” he said. “Why it hasn’t happened by now, I don’t know.”

The crisis has hit the poor hardest.

Five days a week, scores of people line up for free meals from a charity kitchen in Tripoli, some equipped with cut off shampoo bottles to carry their food because they can’t afford regular containers.

Robert Ayoub, the project’s head, said demand is going up, donations from inside Lebanon are going down, and the newcomers represent a new kind of poor: soldiers, bank employees and civil servants whose salaries have lost the bulk of their value.

In line on a recent day were a laborer who had walked an hour from home because he couldn’t afford transportation; a brick layer whose work had dried up; and Dunia Shehadeh, an unemployed housekeeper who picked up a tub of pasta and lentil soup for her husband and three children.

“This will hardly be enough for them,” she said.

The country’s downward spiral has set off a new wave of migration, as Lebanese with foreign passports and marketable skills seek better fortune abroad.

She and her husband had returned to Lebanon from abroad a few years ago and invested $50,000 in a business. But she said that it had failed and that she worried they would struggle to find care if their children got sick.

“There’s no electricity. They could cut the water. Prices are high. Even if someone sends you money from abroad, it doesn’t last,” she said. “There are too many crises.”

Side tables are among the smallest pieces of furniture, but they make a big difference in the way a room looks.“They’re like the bags and shoes of … END_OF_DOCUMENT_TOKEN_TO_BE_REPLACED

SAN FRANCISCO--(BUSINESS WIRE)--Snapdocs, a leading digital closing platform for the mortgage industry, announced today that its eClosing offering has … END_OF_DOCUMENT_TOKEN_TO_BE_REPLACED