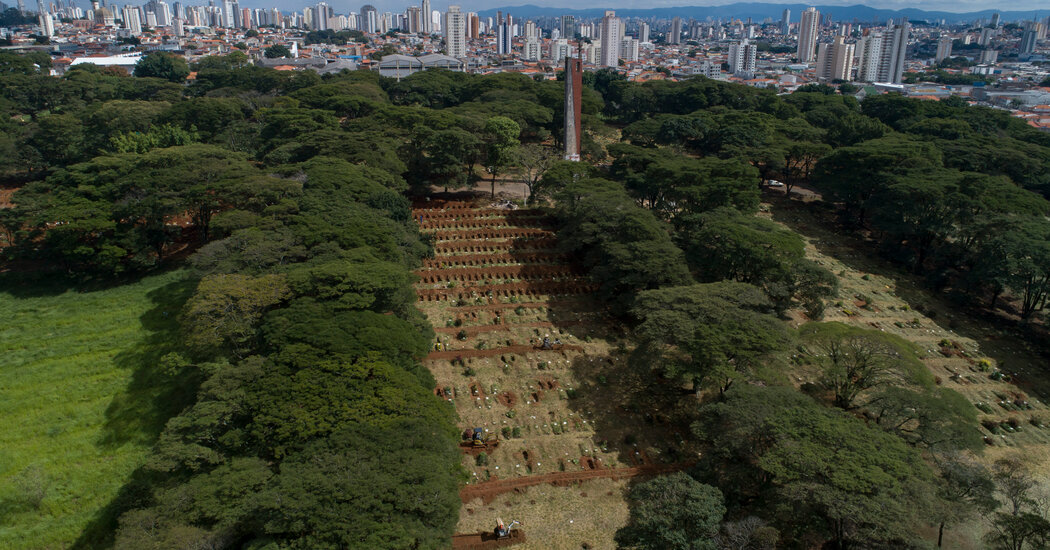 Three million lives: That is roughly equivalent to losing the population of Berlin, Chicago or Taipei. The scale is so staggering that it sometimes begins to feel real only in places like graveyards.

More than 100,000 people have died of Covid-19 in France. The death rate is inching up in Michigan. Morgues in some Indian cities are overflowing with corpses.

The world’s Covid-19 death toll surpassed three million on Saturday, according to a New York Times database. And as the United States and other rich nations race to vaccinate their populations, new hot spots have emerged in parts of Asia, Eastern Europe and Latin America.

The global pace of deaths is accelerating, too. After the coronavirus emerged in the Chinese city of Wuhan, the pandemic claimed a million lives in nine months. It took another four months to kill its second million, and just three months to kill a million more.

according to a New York Times tracker.

At the same time, new outbreaks are still cropping up persistently in rich countries. That has shocked millions of people — from Madrid to Los Angeles — who once expected regular life to resume in tandem with vaccine rollouts.

France, which on Thursday became the third country in Western Europe to pass 100,000 deaths, is in the throes of a third national lockdown.

France on Thursday was the third European country to pass the tragic milestone of 100,000 coronavirus deaths, as it struggles to envision a clear way out of a third wave of infections.

A deep sense of fatigue and frustration has taken root in the country over a seemingly endless cycle of coronavirus restrictions and Paris has been shrouded in gloom for months. The country entered a third national lockdown two weeks ago that has limited outdoor activities, forced nonessential shops to close, banned travel between regions and shut schools for a month.

Michigan, the worst-hit state, is reporting an average of about 50 deaths a day, twice as many as two weeks ago, along with 7,800 or so new cases.

The United States and parts of Western Europe bore the brunt of deaths for the first year of the pandemic. Now, the hot spots for fatalities are in regions like Eastern Europe, South Asia and Latin America.

told The New York Times in Mexico City. “It just never crossed your mind that there would be so many dead in so little time.”

One reason for all the carnage is that richer countries have essentially hoarded vaccines, leaving poorer ones to scramble desperately for doses.

Safety worries about the AstraZeneca and Johnson & Johnson vaccines, based on a small number of people who developed problems with blood clotting, have also exacerbated vaccine hesitancy around the world — a trend that threatens to prolong the pandemic and subvert nascent vaccination drives.

undone decades of economic progress in India. Now, the country of 1.3 billion people is recording an average of about 1,000 deaths a day as a huge outbreak flares in the western state of Maharashtra, which is home to Mumbai.

India reported 1,341 deaths on Saturday alone, along with nearly a quarter of a million new cases.

Swapnil Gaikwad, 28, whose uncle died on Friday in the Osmanabad district of Maharashtra, said that it had taken seven hours to perform the traditional burial rites because the local crematory was so busy.

“There was absolutely no space, and more ambulances were arriving,” he said.

At one point, Mr. Gaikwad said, he became so angry that he complained to the staff.

One worker there began to cry. Mr. Gaikwad said some workers had told him that they were so busy at the crematory that they had not seen their own families for days.

AUSTIN, Texas--(BUSINESS WIRE)--As the first multifamily management company to be recognized in the Public Relations and Marketing Excellence Awards, … END_OF_DOCUMENT_TOKEN_TO_BE_REPLACED

There have been whispers of cooling housing and rental prices in the San Francisco Bay Area, but that hasn't yet translated into practical, noticeable … END_OF_DOCUMENT_TOKEN_TO_BE_REPLACED

Cars pass in Independence Square at twilight in Kyiv, Ukraine, Monday, Oct. 31, 2022. Rolling ... [+] blackouts are increasing across Ukraine as the … END_OF_DOCUMENT_TOKEN_TO_BE_REPLACED