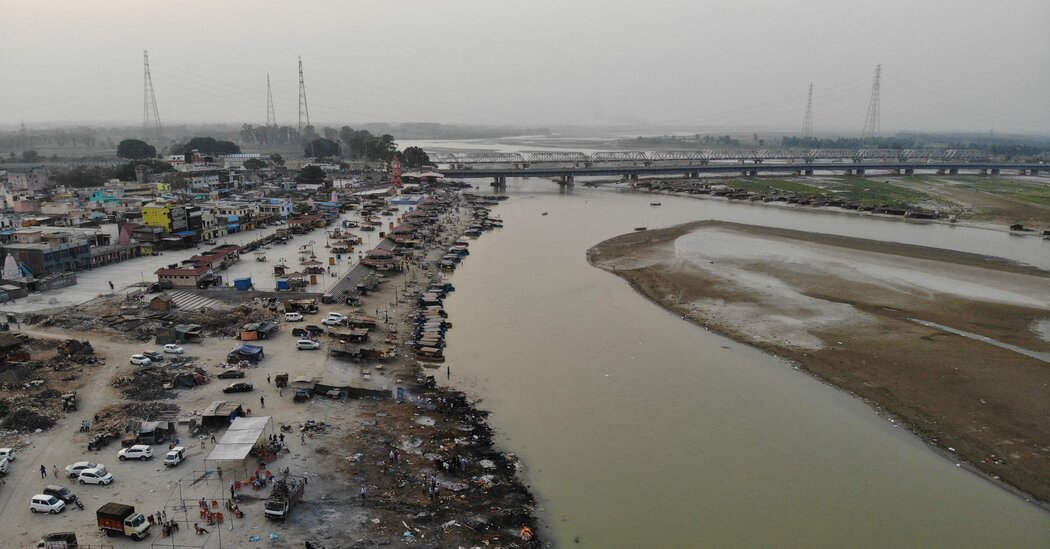 NEW DELHI — Dozens of bodies washed up on the banks of the Ganges this week, most likely the remains of people who perished from Covid-19.

States in southern India have threatened to stop sharing medical oxygen with each other, fiercely protective about holding on to whatever they have as their hospitals swell with the sick and infections skyrocket.

And at one hospital in Andhra Pradesh, a rural state in southeastern India, furious relatives went on a rampage in the intensive care unit after lifesaving oxygen suddenly ran out — the latest example of the same tragedy repeating itself, of patients dying while gasping for air.

The desperation that engulfed New Delhi, India’s capital, over the past few weeks is now spreading across the entire country, hitting states and rural areas with many fewer resources. Positivity rates are soaring in those states, and public health experts say that the rising numbers most likely fall far short of giving the true picture in places where sickness and deaths caused by Covid-19 are harder to track.

B.1.167, may be especially transmissible, which is just adding to the sense of alarm.

an Indian news site that has been tracking the string of deadly incidents.

roughly two million doses that have been administered each day over the past few days are lower than the highs a few weeks ago, when some days the country gave out more than three million doses. Many people can’t find any appointments to get the shot. Some vaccination sites have completely run out, officials say.

All this is leading to the sharpest criticism that Narendra Modi, India’s powerful prime minister, has faced since he came into office seven years ago. He has been widely accused of declaring premature victory over the coronavirus and encouraging his country to drop its guard.

Mr. Modi’s Bharatiya Janata Party remains India’s most powerful political organization by far. But the solid wall that the party has maintained during this crisis may be showing some cracks.

Several party lawmakers in Uttar Pradesh, India’s biggest state and one controlled by Mr. Modi’s party, have begun to grumble about the way the state government has responded.

reported 12,481 new infections on Tuesday, less than half of what was reported on April 30. And the positivity rate among people being tested for the coronavirus has been steadily falling in the city, to 19 percent from a troubling high of 36 percent a few weeks ago.

In Mumbai, India’s commercial capital, something similar has happened and people are now allowing themselves to wonder if the worst has passed. Mumbai’s positivity rate has dropped to about 7 percent from roughly 25 percent.

chugged into Bangalore on Tuesday morning.

Kerala says it can’t ship out oxygen because it needs its entire supply for its own rising needs. Tamil Nadu, also in the south, is saying the same thing and that it can’t supply its poorer neighbor, Andhra Pradesh, where the 11 people died from the oxygen cutoff Monday night.

“I can hardly imagine what is going on in rural India,” said Rijo M. John, a health economist in Kerala, where the positivity rate shot up to nearly 27 percent on Tuesday, from around 8 percent in early April.

Mr. John said that rural areas were not doing much Covid testing and that many people “may be dying due to a lack of any treatment at all.”

A particularly troubling omen came to a riverside village in Bihar, a rural state in northern India. In the village of Chausa, residents were feeling deeply uneasy after discovering dozens of bodies that mysteriously washed up on the banks of the Ganges.

Nobody knows who these people were or how their bodies got there. Villagers found them on Monday evening. Stunned onlookers crowded around the remains, many with brightly colored clothes sticking to them, floating in the shallows. Images of the bloated bodies have made the rounds across Indian media, unsettling countless people.

Officials said around 30 bodies had been found. Witnesses put the figure at more than 100.

Once in awhile, villagers said, they see a single corpse floating in the river. It’s part of a custom in which some families send the bodies of their loved ones into the Ganges, the holiest river in Hinduism, weighted down by stones. But officials and residents in Chausa suspect that the unprecedented number of bodies they found this week belonged to victims of Covid-19.

As Covid-19 has ravaged this area, Dr. Srivastava said he has seen more and more people transporting dead bodies, sometimes on their shoulders. “Definitely,” he said. “More deaths are happening.”

Krishna Dutt Mishra, an ambulance driver in Chausa, said that many poor people were disposing of bodies in the river because ever since the second wave of Covid hit, the price of cremations has shot up from 2,000 rupees, about $27, to 15,000 rupees, about $200, which for most families is an insurmountable sum.

This has become a problem across India. Covid-19 deaths have overwhelmed cremation grounds, and some unscrupulous cremation workers are now charging five or even 10 times the normal price for last rites.

“I drove the entire stretch from Buxar to Chausa,” Mr. Mishra said, referring to another town a little further east. “I have never seen even a few bodies, let alone so many of them, lined up on the river, all through this stretch.”

The Bay Area is the last place in the U.S. with rental prices below pre-pandemic levels, according to a new report from Apartment List. That seems … END_OF_DOCUMENT_TOKEN_TO_BE_REPLACED

BUCHA, Ukraine — A breeze rustles through the cherry blossoms in bloom on almost every block in this small city, the white petals fluttering onto … END_OF_DOCUMENT_TOKEN_TO_BE_REPLACED