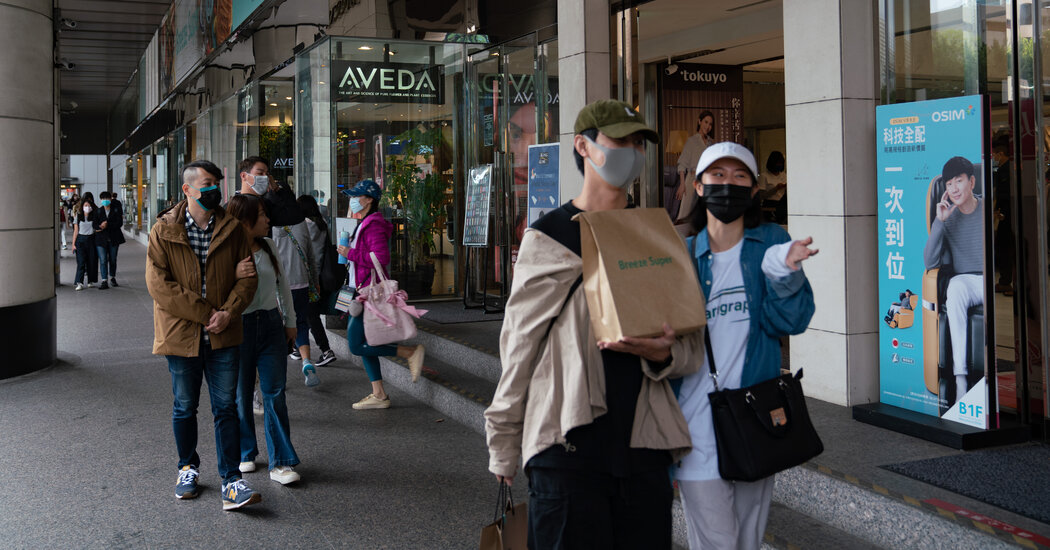 TAIPEI, Taiwan — As the coronavirus has upended lives and economies around the world, Taiwan has been an oasis.

Every day, droplets fly with abandon in packed restaurants, bars and cafes. Office buildings hum, and schools resound with the shrieks and laughter of maskless children. In October, a Pride parade drew an estimated 130,000 people to the streets of Taipei, the capital. Rainbow masks were abundant; social distancing, not so much.

This island of 24 million, which has seen just 10 Covid-19 deaths and fewer than 1,000 cases, has used its success to sell something in short supply: living without fear of the coronavirus. The relatively few people who are allowed to enter Taiwan have been coming in droves, and they’ve helped to fuel an economic boom.

“For a while, Taiwan felt a little empty. A lot of people moved abroad and only came back once in a while,” said Justine Li, the head chef at Fleur de Sel, a Michelin-starred restaurant in the city of Taichung, which she said had been booked up for a month in advance since the fall. “Now, some of those once-in-a-while guests have moved back.”

Eddie Huang, the Taiwanese-American restaurateur and author. About 270,000 more Taiwanese entered the island than left it in 2020, according to the immigration authorities — about four times the net inflow of the previous year.

expects 4.6percent growth in 2021, which would be the fastest pace in seven years.

Steve Chen, 42, a Taiwanese-American entrepreneur who co-founded YouTube, was the first to sign up for the gold card program. He moved to the island from San Francisco with his wife and two children in 2019. Then, after the pandemic hit, many of his friends in Silicon Valley, particularly those with Taiwanese heritage, began to join him — a reverse brain drain, of sorts.

started a campaign encouraging them to take two pounds of trash with them when they left.

Some aspects of pandemic life have permeated Taiwan’s borders. Temperature checks and hand sanitizing are common, and masks are required in many public places (though not schools).

But for the most part, the virus has been out of sight and out of mind, thanks to rigorous contact tracing and strict quarantines for incoming travelers.

Some returnees, like Robin Wei, 35, are dreading their eventual departure.

“We just feel very lucky and definitely a little guilty,” said Mr. Wei, a product manager for a Bay Area tech company who returned to Taipei with his wife and young son last May. “We feel like we are the ones who benefited from the pandemic.”

received its first batch, to be given to medical workers.

Some people, like Tai Ling Sun, 72, are already making plans to leave the bubble.

In January, Ms. Sun and her husband came from California to the city of Kaohsiung, where she grew up, at the urging of friends and family in Taiwan. They were concerned about her safety in Orange County, where coronavirus cases had been on the rise.

After two weeks in quarantine, Ms. Sun stepped out into a Taiwan that — aside from the masks — looked and felt almost exactly as it had on previous visits. She has since been making the most of her stay with a series of routine medical checkups, something that many in the United States have been delaying since the pandemic started.

But a virus-free paradise doesn’t provide immunity to all ailments. Ms. Sun said she had begun to feel homesick. She longed to see her five children and breathe pristine suburban air. And, she added, she wanted a vaccine.

MIAMI--(BUSINESS WIRE)--Intelli Smart Homes, the leading smart home technology company, has been recognized as one of America’s fastest-growing … END_OF_DOCUMENT_TOKEN_TO_BE_REPLACED

Customers outside a Walmart store in Torrance, California, US, on Sunday, May 15, 2022. Walmart Inc. is scheduled to release earnings figures on May … END_OF_DOCUMENT_TOKEN_TO_BE_REPLACED

The past few years have been brutal on homebuyers' budgets. Would-be buyers have been priced out of some of the most desirable neighborhoods thanks to … END_OF_DOCUMENT_TOKEN_TO_BE_REPLACED