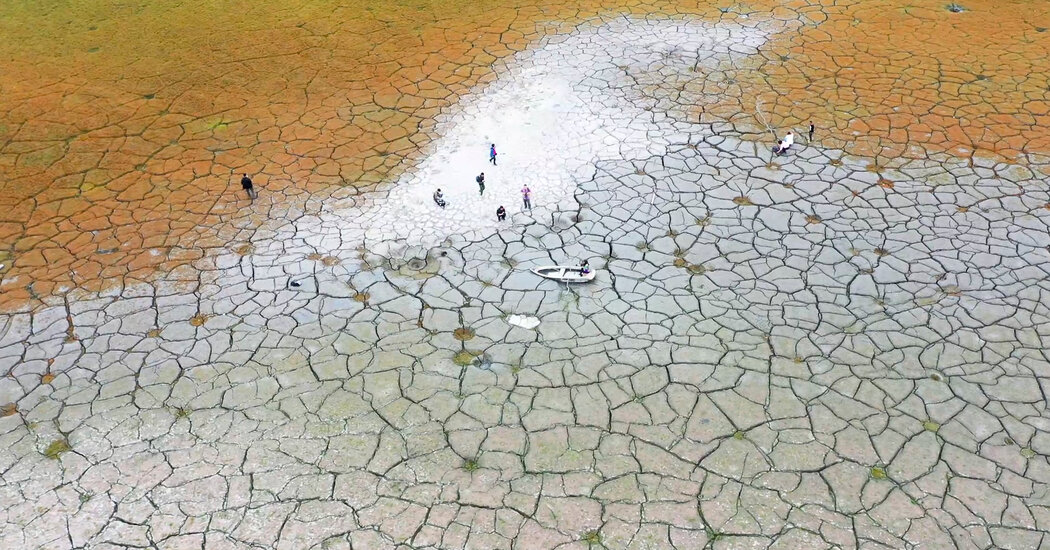 TAIPEI, Taiwan — Sun Moon Lake was once a popular tourist spot in Taiwan. But now the bottom of the lake is Instagram-famous for a grim reason: one of the worst droughts to hit the island in decades.

The parched lake bed — cracks snaking across the ground as far as the eye can see — has drawn the attention of influencers, who have trekked to the site to take visually arresting photos of the terrain and post them online.

But the situation is dire. Residents have prayed to the god Matsu for rain after a monthslong drought dried up the island’s reservoirs. Some parts of the lake have begun to grow grass, and jetties that normally float are sitting on dry mud. Tour boats sit idle.

“Our business is 90 percent less than last year,” said Wang Ying-shen, chairman of a group for businesspeople who rent boats to visitors.

putting pressure on the island’s semiconductor industry. More than 90 percent of the world’s manufacturing capacity for the most advanced chips is in Taiwan.

Farmers who need to flood paddies to raise rice, lotus root and other thirsty crops have been hit hard. “The lotus flowers and seeds I planted don’t produce well,” said Chen Chiu-lang, a farmer in the southern city of Tainan, standing in a dry paddy field.

Households in areas under top-level restrictions go without running water two days a week. They include Taiwan’s second-biggest city, Taichung, with 2.8 million people; Hsinchu, one of the biggest global enters for semiconductor manufacturing; and Tainan and Kaohsiung in the south. The economics minister, Wang Mei-hua, has warned that restrictions might be tightened.

The Seattle Seahawks are very much still in the running for Baker Mayfield. (Photo by Stacy ... [+] Revere/Getty Images) Getty Images The Seattle … END_OF_DOCUMENT_TOKEN_TO_BE_REPLACED

(CNN) — Kim Kyung-seop recalls going to cheap bars after class with his friends, where they binged on as much makgeolli as possible. "You know the … END_OF_DOCUMENT_TOKEN_TO_BE_REPLACED