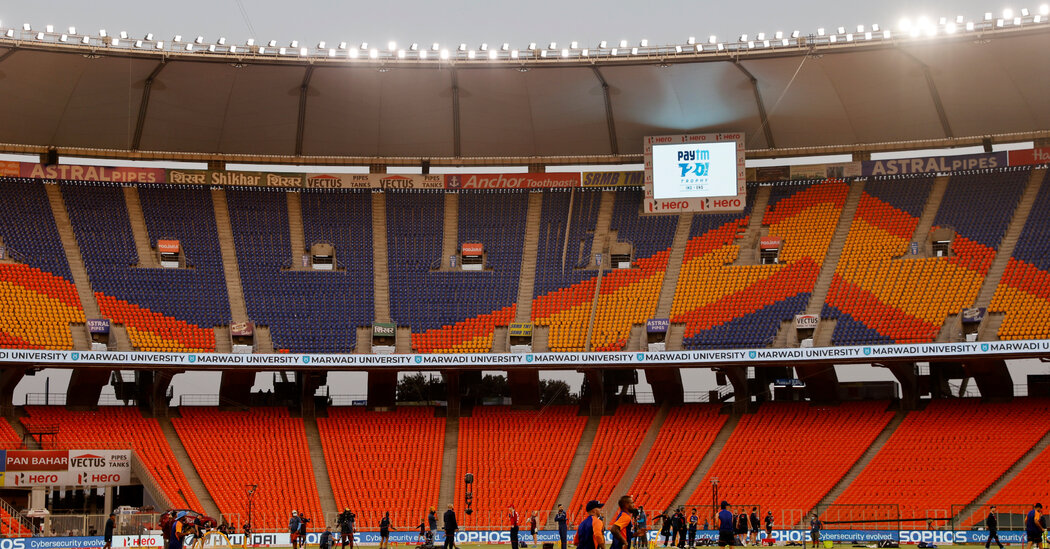 As plumes of smoke rose from cremation grounds, where bodies were arriving faster than they could be burned, teams of professional cricket players squared off under the lights of a cavernous stadium named for India’s prime minister, Narendra Modi.

The jarring scenes unfolded on Thursday in Ahmedabad, the capital of Mr. Modi’s home state of Gujarat and a hot spot in India’s spiraling coronavirus outbreak, which is claiming an average of nearly 3,000 lives a day nationwide.

For decades, cricket and its charismatic stars have commanded exalted status in India, where the once-genteel colonial game attracts its biggest and most passionate fan base. Now, public anger is growing at the sport’s marquee international product, the Indian Premier League, which is playing matches in a “bio-bubble” without spectators that has drawn criticism for diverting resources from the country’s wider coronavirus fight.

“There is a lack of empathy for dead bodies lying in crematoriums surrounding your stadium,” said Rahul Verma, a lawyer and die-hard cricket fan who said he had been a devoted follower of the cricket league since it started in 2008. “This game, a gentleman’s game, never was so grotesque.”

oxygen, medicine and other scarce supplies. Many Indians say they do not know if they are infected with the coronavirus because overwhelmed labs have stopped processing tests.

But one group that seems unaffected is the wealthy and powerful Board of Control for Cricket in India, the regulatory body that oversees the Indian Premier League, which was modeled on soccer’s Premier League in England and features players from around the world.

The board has kept ambulances fitted with mobile intensive-care beds on standby outside stadiums where matches are being played in case a player falls sick. It is testing players every two days and has created a travel bubble between stadiums in the six states hosting matches, including dedicated airport check-in counters for cricketers.

said in a letter released this week that the health and safety of players and staff members were “of paramount importance,” and added that the matches, which conclude on May 30, were a needed distraction in a difficult time.

“When you all walk out onto the field, you are bringing hope to millions of people who have tuned in,” he wrote.

But the league’s safety protocols have only highlighted the gap between its star players — who have said little publicly in the face of criticism — and the rest of the country.

“That ambulance outside that stadium could have saved at least ten lives a day,” said Ishan Singh, a cricket fan in Delhi. “These players are thieves. Given a chance, they will rob wood from the cremations and sell it in the market.”

The New Indian Express, a daily newspaper, said in an editorial this week that it would suspend coverage of the cricket league until “a semblance of normalcy is restored” in the country.

“This is commercialism gone crass,” the newspaper wrote. “The problem is not with the game but its timing.”

AUSTIN, Texas--(BUSINESS WIRE)--As the first multifamily management company to be recognized in the Public Relations and Marketing Excellence Awards, … END_OF_DOCUMENT_TOKEN_TO_BE_REPLACED

There have been whispers of cooling housing and rental prices in the San Francisco Bay Area, but that hasn't yet translated into practical, noticeable … END_OF_DOCUMENT_TOKEN_TO_BE_REPLACED

Cars pass in Independence Square at twilight in Kyiv, Ukraine, Monday, Oct. 31, 2022. Rolling ... [+] blackouts are increasing across Ukraine as the … END_OF_DOCUMENT_TOKEN_TO_BE_REPLACED