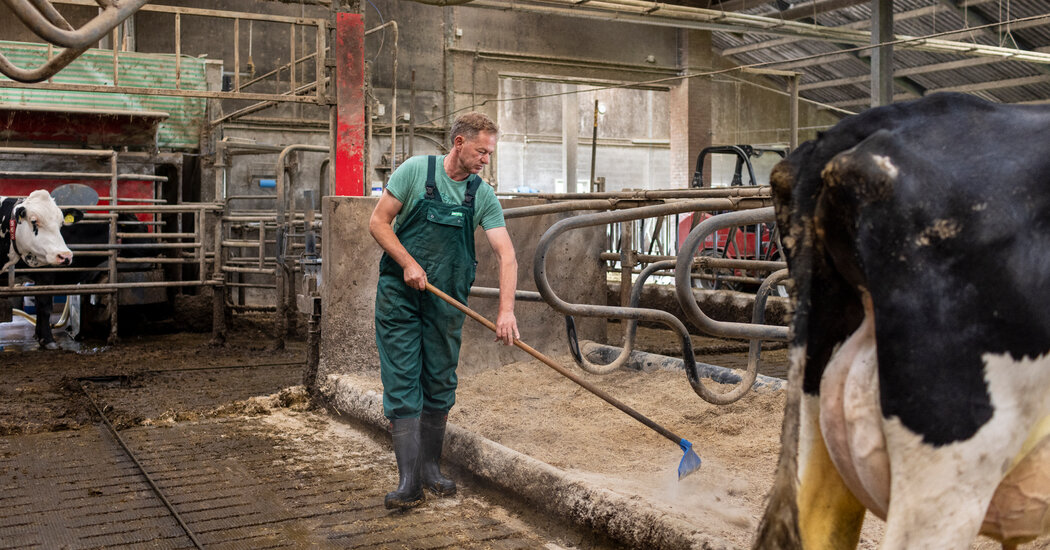 They have set fire to hay and manure along highways, dumped trash on roads to create traffic jams, and blockaded food distribution centers with their tractors, leading to empty shelves in supermarkets. Across the country, upside down flags wave from farmhouses in protest.

The anger of the farmers is directed at the government, which has announced plans for a national 50 percent reduction of nitrogen emissions by 2030, in line with European Union requirements to preserve protected nature reserves, that they believe unfairly targets them. Factories and cars also emit large amounts of nitrogen and have not been targeted, they say, although the government said that cuts associated with both polluters would be addressed in the future.

Agriculture is responsible for the largest share of nitrogen emissions in the Netherlands, much of it from the waste produced by the estimated 1.6 million cows that provide the milk used to make the country’s famed cheeses, like Gouda and Edam.

wrote in a letter to the Dutch minister of agriculture this month that “the transition to a sustainable agricultural and food system is urgent and necessary.” The letter also said that consumers in the Netherlands needed to do their part to make sure emissions targets were reached.

“Consumers also have to take responsibility,” it said. “Dutch people will have to consume more vegetables and fewer (-70%) animal proteins.”

All of this comes as wrenching change in the Netherlands, where dairy farms have long been as much of the national identity as the country’s windmills and canals. It is also a major producer and exporter of milk and milk products. Last year it sent €8.2 billion worth of dairy products abroad and produced a total of 13.8 billion kilos of milk, according to ZuivelNL, a Dairy organization.

to a survey by a Dutch research firm.

Prime Minister Mark Rutte, who this month became the country’s longest-serving prime minister and has grappled with what is known in the Netherlands as “the nitrogen crisis,” has condemned the protests, calling them “unacceptable.”

For now, a government-appointed mediator is engaged in negotiations between the farmers and the government. The mediator has said there is a “crisis of confidence” between the two sides.

“We’re not going without a fight,” said Mr. Apeldoorn, the dairy farmer. “That’s how most farmers feel right now.”

Hometown Deli, Paulsboro, N.J.Mike Calia | CNBCThree men were charged with fraud and other crimes in a scheme involving a company that was worth $100 … END_OF_DOCUMENT_TOKEN_TO_BE_REPLACED

The childhood home of "The Morning Show" actor Nestor Carbonell recently hit the market in Greenwich, CT, for $4.4 million.Fans will appreciate that … END_OF_DOCUMENT_TOKEN_TO_BE_REPLACED