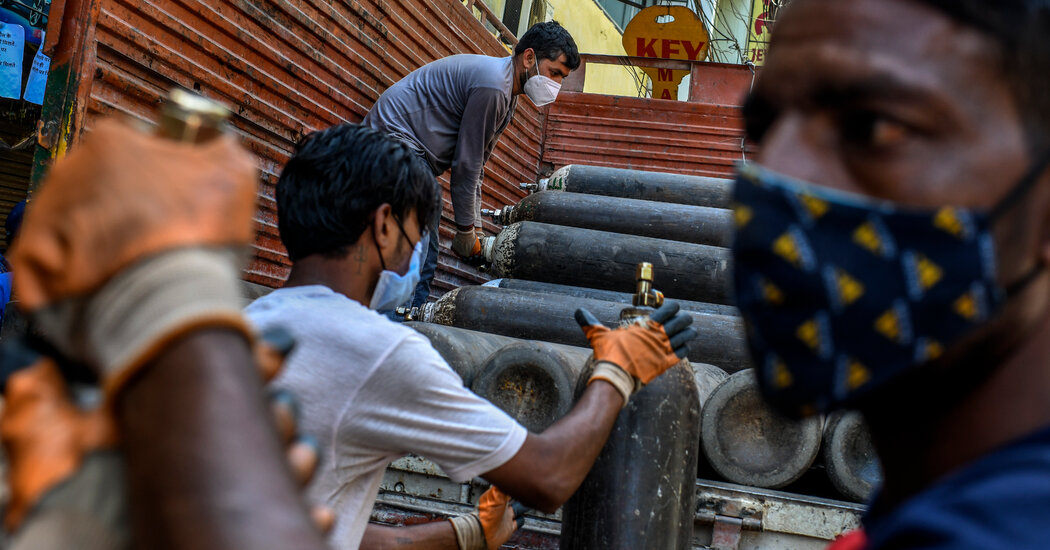 When the pipes carrying oxygen to critically ill Covid-19 patients stopped working at a hospital in the southern Indian state of Karnataka on Sunday evening, relatives of sick patients used towels to fan their loved ones in an attempt to save them.

Some anguished family members sent desperate pleas for oxygen on social media. Others grabbed their phones and frantically dialed local politicians. A few even sprinted down the hospital’s hallways, desperately searching for a doctor, a nurse, anyone, to help.

But nothing worked. There was no oxygen left.

“Everyone was helpless,” said Rani, who goes by one name, and whose husband Sureendra, 29, was among several Covid-19 patients who died because the lifesaving oxygen had suddenly run out. “I want to kill myself. What will I do without my husband now?”

Local officials provided different accounts of the death toll at the hospital. Some said that at least 10 died from oxygen deprivation. Others said that 14 more died after the accident but that they died of comorbidities related to Covid, not directly from the oxygen shortage.

after family members said that there, too, the oxygen had run out though officials denied that.

Doctors at dozens of hospitals in Delhi have been warning that they have come dangerously close to running out as well and that it was untenable to keep waiting for last-minute supplies to arrive. As the latest incident shows, at a hospital more than a thousand miles from the capital, oxygen shortages have now spread nationwide.

Nigeria, have faced oxygen shortages as well, and the World Health Organization estimated earlier this year that 500,000 people were in need of medical oxygen every day.

But no country has seen as many sick people desperate for oxygen as there are in India right now, and the deadly accidents, like what just happened in Karnataka, keep repeating themselves.

“It is a failure of governance,” said Ritu Priya, a professor, at Center of Social Medicine and Community health in Jawaharlal University, in New Delhi. “We were not able to channelize oxygen distribution over the past year, when that is what we should have been doing.”

Medical oxygen has suddenly become one of the most precious resources in India, and the need for it will continue as the surge of coronavirus infections is hardly abating.

On Monday, the Indian federal Health Ministry reported 368,147 new cases and 3,417 deaths from the virus, a figure that remains low on the first day of the week. The Indian government says that it has enough liquid oxygen to meet medical needs and that it is rapidly expanding its supply. It blames logistical issues for shortages of oxygen, but many doctors and sick people question that.

While people continue to die from a lack of oxygen, Prime Minister Narendra Modi’s government and the local government in Delhi, the epicenter of the oxygen crisis, are fighting in court.

sent supplies late on Sunday evening, but Chamarajanagar district officials said none arrived at the hospital.

Rani, 28, a staff nurse and the wife of Sureendra, who was in the I.C.U., said she spoke to her husband around 8:30 p.m. on Sunday when he was eating dinner and sounded fine, she said.

“Please come here, I don’t want to die without seeing your face,” he said.

Rani, said she was shocked and called hospital authorities, who said they would arrange the oxygen soon. She called her husband again and told him to do breathing exercises and try to lay face down.

She asked neighbors to accompany her to the hospital, a journey of 45 minutes from their village home, but they refused, saying it was risky to travel at night.

When she arrived at the hospital her, father-in-law told her she was now a widow. Her husband had died early on Monday, during that 10-hour period when the hospital was out of oxygen.

“God has been very unkind and cruel to me.” she said. “The happiness he gave me briefly has been snatched from me.”

The Seattle Seahawks are very much still in the running for Baker Mayfield. (Photo by Stacy ... [+] Revere/Getty Images) Getty Images The Seattle … END_OF_DOCUMENT_TOKEN_TO_BE_REPLACED

LANSING, Mich. — At least 357 sitting Republican legislators in closely contested battleground states have used the power of their office to discredit … END_OF_DOCUMENT_TOKEN_TO_BE_REPLACED