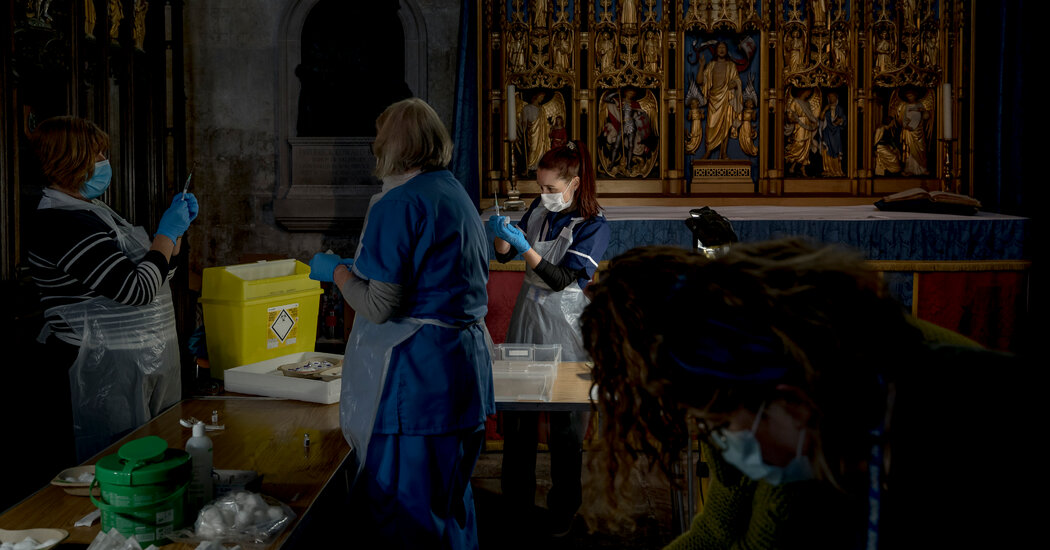 LONDON — Britain’s speedy Covid-19 vaccination program has been dealt a blow by a delivery delay of millions of doses ordered from India, a setback that illustrates the fragility of global supplies and underscores fears that an exit from the pandemic could be hampered by vaccine nationalism.

News of a shortfall that will slow the British vaccine roll out came amid a bitter dispute over supplies between London and the European Union, and a veiled threat from the bloc to use “whatever tool” is necessary to make sure Europe gets its “fair share of vaccines.”

Although the death toll from Covid-19 in Britain now exceeds 125,000, the government of Prime Minister Boris Johnson has outpaced the rest of Europe with a vaccination program that has already provided first doses to more than 25 million people.

But that giddying pace is set to slow as a result of the delay in the delivery of about 4 million doses from India, underscoring the extent to which even successful vaccination programs are at the mercy of supply chains.

for Europe’s sluggish vaccination campaign, said that in the last six weeks, the bloc exported 41 million doses of vaccines to 33 countries. “But open roads run in both directions,” she said in what was a clear warning to Britain, asking for “reciprocity.”

To complicate the picture, 20 European nations have paused partially or completely use of the AstraZeneca vaccine — some supplies of which are produced in Britain — over safety fears.

Doubts about the AstraZeneca vaccine have proved a headache for the authorities since they emerged in Norway after a small number of those who received the vaccine experienced blood clots.

aid Thursday that the AstraZeneca vaccine was “safe and effective,” and that its benefits far outweigh its risks.

European nations will decide individually whether to resume AstraZeneca shots, and at the news conference Mr. Johnson said he expected to be given the jab on Friday.

Jonathan Ashworth, who speaks for the opposition Labour Party on health issues, said in Parliament that he supported the vaccine but that worries about it must be addressed. He said he had heard that “hundreds of people failed to show for appointments” in London “and we think that is because of concerns and misinformation circulating online.”

Professor Farrar said it was important that every unusual event after a vaccination was investigated transparently, but added that he had seen “no evidence to date that would cause me to pause the vaccination program,” a step that he called “a bigger risk.”

He also warned that, despite the success of Britain’s vaccination efforts so far, the pandemic was far from over and that the country faced significant threats later this year.

“The big concern for me is the autumn and winter,” he said, with one looming question being whether children would be vaccinated to prevent a new wave of transmission in the fall.

“We cannot assume that we are through this pandemic, and I do have a major concern for the period September to February 2022,” he said. “We need to be preparing for that during the summer and we don’t need to get into the optimism bias of the summer of 2020.”

Chief Covelli said Mr. Crimo planned the shooting for several weeks, but that the authorities had not yet established what his motive was. “We have no … END_OF_DOCUMENT_TOKEN_TO_BE_REPLACED

Kevin McKenzie and Martine van Hamel were standing in the dining room of their weekend house in Woodstock, N.Y., trying to figure out when they got … END_OF_DOCUMENT_TOKEN_TO_BE_REPLACED