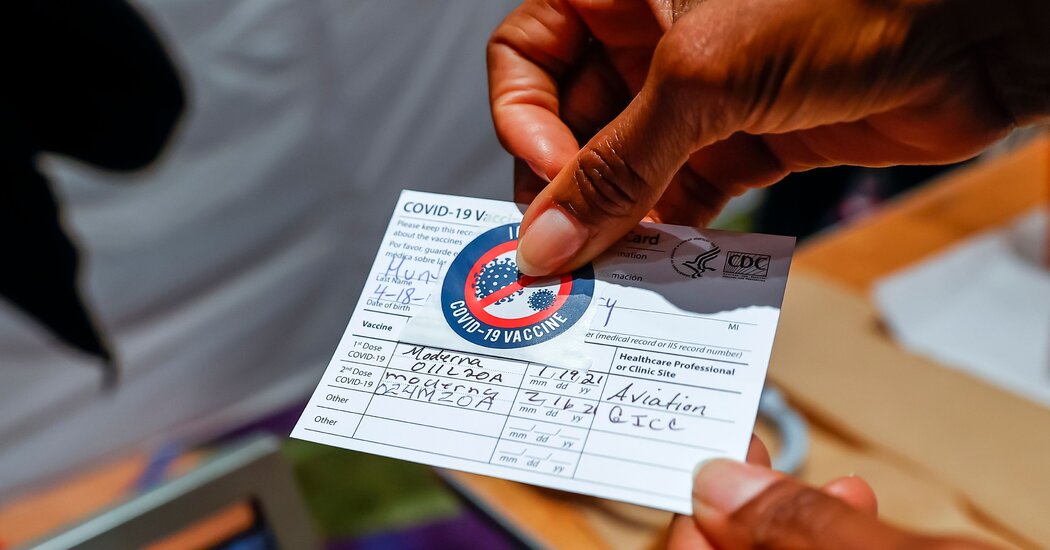 Florida has banned state and local government agencies and businesses from requiring so-called vaccine passports, or documentation proving that someone has been vaccinated against Covid-19.

Gov. Ron DeSantis, a Republican, issued an executive order on Friday prohibiting businesses from requiring patrons or customers to show vaccine documentation, or risk losing grants or contracts funded by the state. It was not immediately clear how the order applied to state and local government agencies.

Requiring proof of vaccination, the order says, would “reduce individual freedom” and “harm patient privacy,” as well as “create two classes of citizens based on vaccination.”

There has been much discussion about vaccine passports, a way to show proof that someone has been vaccinated against the coronavirus, though the passports raise daunting political, ethical and privilege questions. The Biden administration has made clear that it will neither issue nor require the passports, but Republicans have seized on the issue as an example of government overreach.

executive orders aimed at curbing the virus crisis called for government agencies to “assess the feasibility of linking Covid-19 vaccination to International Certificates of Vaccination or Prophylaxis” and creating electronic versions of them. A wide range of businesses, especially cruise lines and airlines, are eager to have a way for their customers to show proof of vaccination, especially as the number of new virus cases rises across the country.

The Centers for Disease Control and Prevention said on Friday that about 101.8 million people — nearly one-third of the total U.S. population — had received at least one dose of a Covid-19 vaccine. As of Friday, an average of nearly three million shots a day were being administered, according to data reported by the C.D.C.

“It’s completely unacceptable for either the government or the private sector to impose upon you the requirement that you show proof of vaccine to just simply be able to participate in normal society,” Mr. DeSantis said at a news conference on Monday.

Some other Republican governors have also come out against the passport concept. Gov. Pete Ricketts of Nebraska issued a statement Wednesday saying that the state would not participate in any vaccine passport program, and Gov. Mike Parson of Missouri told reporters Thursday that he would not require vaccine passports in the state but was also not opposed to private companies adopting them.

The C.D.C. has issued guidance for fully vaccinated people that allows for the resumption of some activities in private settings. And on Friday, the agency said fully vaccinated Americans can travel “at low risk to themselves,” though federal health officials have urged people not to travel at all, unless they absolutely must.

New York, however, the state recently introduced a digital tool to allow people to easily show that they have either tested negative for the coronavirus or have been vaccinated in order to gain entry into some events and venues.

Some colleges and universities have also begun setting vaccine requirements for the next school year. Cornell University issued a statement on Friday saying that vaccinations would be required for in-person attendance in the fall, and Rutgers University in New Jersey said last week that all students would need to be fully vaccinated to be allowed to return to campus in the fall, baring religious or medical reasons.

Mr. DeSantis’s order is likely to draw legal challenges, raising questions about the impact of two Supreme Court decisions. In Jacobson v. Massachusetts, the high court in 1905 upheld the authority of states to enforce compulsory vaccination laws. That ruling for more than a century has let public schools require proof of vaccinations of its students, with some exceptions for religious objections.

In 2018, the Supreme Court ruled in favor of a Colorado baker who had refused to create a wedding cake for a gay couple on narrow grounds, and other courts have struggled with how to balance state laws barring discrimination against constitutional rights like free speech and the free exercise of religion. It is not clear that Florida businesses could invoke a constitutional right to refuse to comply with the new measure.

Some venues and events in Florida had already made plans to require vaccinations. The Miami Heat basketball team said it would give prime seating to vaccinated fans. The South Beach Wine & Food Festival said it would require proof of vaccination or a negative coronavirus test to attend. Nova Southeastern University said it would mandate vaccinations for all faculty and staff members as of Aug. 1 to participate in on-campus learning.

It was not immediately clear on Friday what those businesses would do in response to the governor’s order.

AUSTIN, Texas--(BUSINESS WIRE)--As the first multifamily management company to be recognized in the Public Relations and Marketing Excellence Awards, … END_OF_DOCUMENT_TOKEN_TO_BE_REPLACED

There have been whispers of cooling housing and rental prices in the San Francisco Bay Area, but that hasn't yet translated into practical, noticeable … END_OF_DOCUMENT_TOKEN_TO_BE_REPLACED

Cars pass in Independence Square at twilight in Kyiv, Ukraine, Monday, Oct. 31, 2022. Rolling ... [+] blackouts are increasing across Ukraine as the … END_OF_DOCUMENT_TOKEN_TO_BE_REPLACED