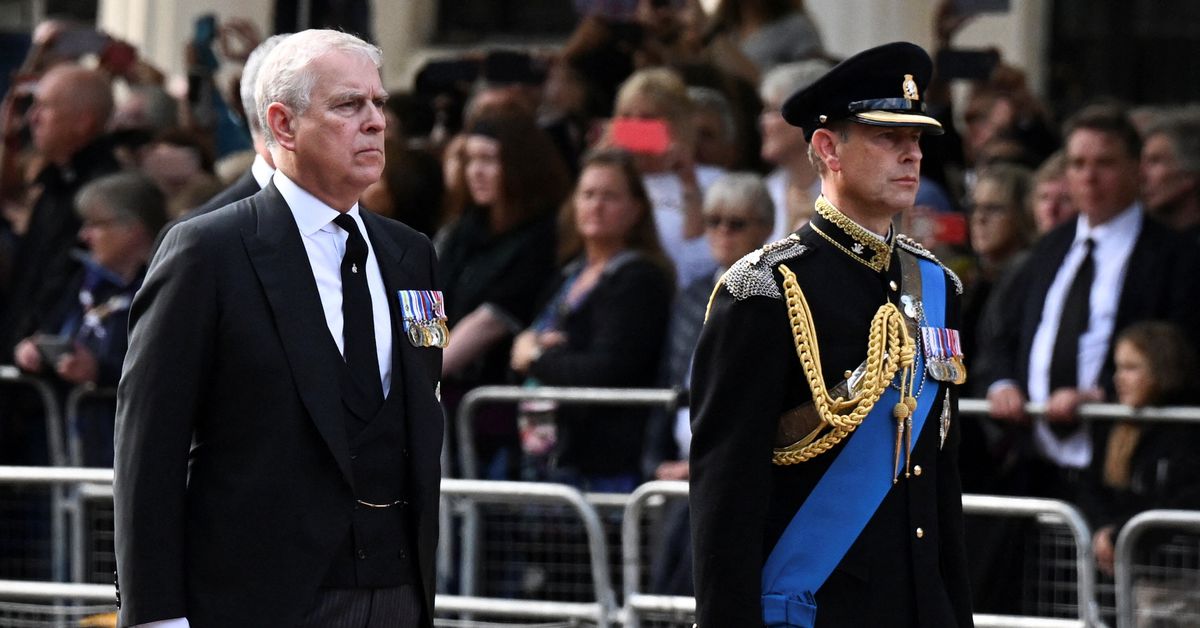 Britain’s Prince Andrew and Prince Edward march during a procession where the coffin of Britain’s Queen Elizabeth is transported from Buckingham Palace to the Houses of Parliament for her lying in state, in London, Britain, September 14, 2022. REUTERS/Clodagh Kilcoyne

LONDON, Sept 15 (Reuters) – Amid the displays of emotion and deference since the death of Queen Elizabeth, the presence of one figure has added a discordant note to the solemn rituals leading up to her funeral – that of her disgraced son Prince Andrew.

Reputedly the queen’s favourite son, Andrew was stripped of most of his titles and removed from royal duties due to a scandal over his friendship with U.S. financier Jeffrey Epstein, a convicted sex offender, and a related sex assault allegation.

He has not been charged with any criminal offence and has denied any wrongdoing.

After a period where he has been out of the public eye, the sight of Andrew, 62, in the global spotlight following his mother’s death has served as a reminder of his fall from grace.

A Royal Navy veteran of the Falklands War, he has not been allowed to wear a military uniform during two solemn processions, one in Edinburgh and one in London, when he and his three siblings walked behind the queen’s coffin.

King Charles, Princess Anne and Prince Edward wore full dress uniforms while Andrew was in a morning suit, drawing attention to his peculiar status. He will be allowed to wear uniform as a special mark of respect for the queen during a final vigil the siblings will hold as her body lies in state.

In Edinburgh on Monday, one heckler shouted out: “Andrew, you’re a sick old man”.

The man was bundled away and has been charged with a breach of the peace. But if that was a rare instance of loud public protest, the sentiment seems to be more widely shared.

“There’s no place for Andrew in the future of the family or country, but I think the queen did right to sideline him. He’s brought shame, but I think his family knows what the British people think of him,” said Mary Burke, a 47-year-old from the south coast town of Brighton, as she waited in the long line to view the queen’s coffin in London’s Westminster Hall.

Andrew has not taken part in events at which royals have greeted members of the public, other than a brief appearance outside Balmoral Castle two days after the queen’s death.

Eyebrows have been raised over his continued position as a Counsellor of State, a formal position.

“If this isn’t changed, the monarchy is going to lose many who currently might support them,” wrote Sheila Le Mottee in a comment on an article in the pro-independence Scottish newspaper The National.

“The only reason he is tolerated just now is because he is a son who has just lost his mother.”

Once upon a time, Andrew was a popular figure.

Tabloids nicknamed him the “Playboy Prince” as they cheerfully reported on his love life, and he won respect for his service as a helicopter pilot in the Falklands.

His marriage in 1986 to Sarah Ferguson was seen at the time as bringing a breath of fresh air to a stuffy institution.

It all went wrong gradually and then suddenly.

As a roving trade ambassador, he gained the nickname “Air Miles Andy” for his frequent travels, which often involved rounds of golf. His marriage ended in divorce in 1996. The media criticised him for what was described as high-handed behaviour and an overly lavish lifestyle.

But it was the Epstein affair that brought true ignominy upon Andrew.

He stayed at Epstein’s various homes and one video from 2010 showed him inside Epstein’s New York townhouse, waving to a woman from the door. Epstein had been jailed in 2008 for child sex offences.

A photograph circulated picturing him with his arm around a young woman named Virginia Roberts – who accused Epstein of grooming her as a “sex slave”. Also in the picture is socialite Ghislaine Maxwell, who in June this year was sentenced by a U.S. court to 20 years imprisonment for child sex trafficking.

Roberts, now called Virginia Giuffre, said as a teenager she had been forced to have sex with Andrew in London, New York and on a private Caribbean island between 1999 and 2002.

In an effort to clear the air, Andrew sat down for an interview with the BBC in November 2019.

He said he did not regret his friendship with Epstein, denied having sex with Roberts and said he had no recollection of even meeting her.

But his justifications, for example saying that her account of dancing with him in a nightclub where he sweated profusely could not be true because he was unable to sweat following an overdose of adrenalin during the Falklands War, were widely ridiculed.

Giuffre eventually sued Andrew alleging he sexually assaulted her when she was aged 17. In March this year, he settled the suit without admitting any liability. The settlement included an undisclosed payment.

Andrew remains eighth in the order of succession to the throne, and British media have speculated that he may still hold the hope of making a full return to public life.

But royal observers think that is highly unlikely, not least as Charles has already spoken of having a slimmed-down monarchy with fewer working royals.

Andrew has, however, assumed one new role. A spokesperson said he would take over care of his late mother’s two corgi dogs.

Hometown Deli, Paulsboro, N.J.Mike Calia | CNBCThree men were charged with fraud and other crimes in a scheme involving a company that was worth $100 … END_OF_DOCUMENT_TOKEN_TO_BE_REPLACED

The childhood home of "The Morning Show" actor Nestor Carbonell recently hit the market in Greenwich, CT, for $4.4 million.Fans will appreciate that … END_OF_DOCUMENT_TOKEN_TO_BE_REPLACED