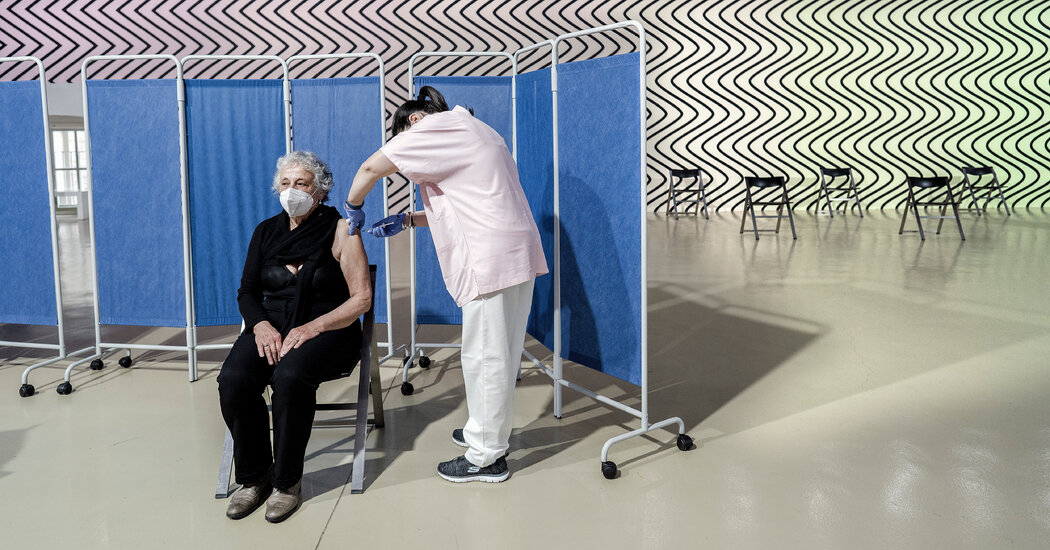 BRUSSELS — Under growing pressure, the European Union is considering whether to follow the Biden administration’s decision to support a waiver of patent rights for Covid-19 vaccines as many poor and middle-income nations struggle to secure lifesaving doses.

The European Commission’s president, Ursula von der Leyen, stopped short of outright supporting President Biden’s decision in a speech on Thursday morning, but said the European Union was “also ready to discuss any proposals that address the crisis in an effective and pragmatic manner.”

“That is why we are ready to discuss how the U.S. proposal for a waiver on intellectual property protections for Covid-19 vaccines could help achieve that objective,” she said, speaking at the European University Institute in Florence, Italy. “In the short run, however, we call upon all vaccine-producing countries to allow export and to avoid measures that disrupt the supply chains.”

Her comments mark a shift, as she has previously said she did not support patent waivers.

The United States had been a major holdout at the World Trade Organization over a proposal to suspend some intellectual property protections, which could give drugmakers access to the trade secrets of how the vaccines are made. But President Biden had come under increasing pressure to support the proposal, which was drafted by India and South Africa.

“This is a global health crisis, and the extraordinary circumstances of the Covid-19 pandemic call for extraordinary measures,” she said in a statement. “The administration believes strongly in intellectual property protections, but in service of ending this pandemic, supports the waiver of those protections for Covid-19 vaccines.”

Any proposal on waiving patents would require unanimous approval by W.T.O. members, so European Union support is necessary. But even if the proposal passes, it could make little difference to vaccine availability in the short run.

Eighty-three percent of shots that have been administered worldwide have been in high- and upper-middle-income countries. Just 0.2 percent of doses have been administered in low-income countries. In North America, 48 out of 100 adults have received at least one dose of a vaccine; the figure is 31 per 100 adults in Europe. In Africa, it is 1.3, according to data compiled by The New York Times.

Ms. von der Leyen on Thursday once again stated the European Union’s belief that “no one is safe until everyone is safe” in the fight against the pandemic.

That notion, she said, was as true for the continent of Europe as it was for the world. She said she could not imagine what it would have meant if some countries in the European Union secured vaccines while others went without.

an interview with The Times in which she previewed the Pfizer-BioNTech deal last month, she came out strongly against vaccine patent sharing.

“I am not at all a friend of releasing patents,” Ms. von der Leyen said, advancing a common argument among pharmaceutical executives that private enterprise was in part responsible for the innovation that spurred the speedy development of Covid-19 vaccines. “Therefore, you need this private-sector ingenuity behind it,” she added.

It’s a property that offers a unique open floor plan—plus a hot tub with a view.“It was a Methodist church located in a historic little area of St. … END_OF_DOCUMENT_TOKEN_TO_BE_REPLACED