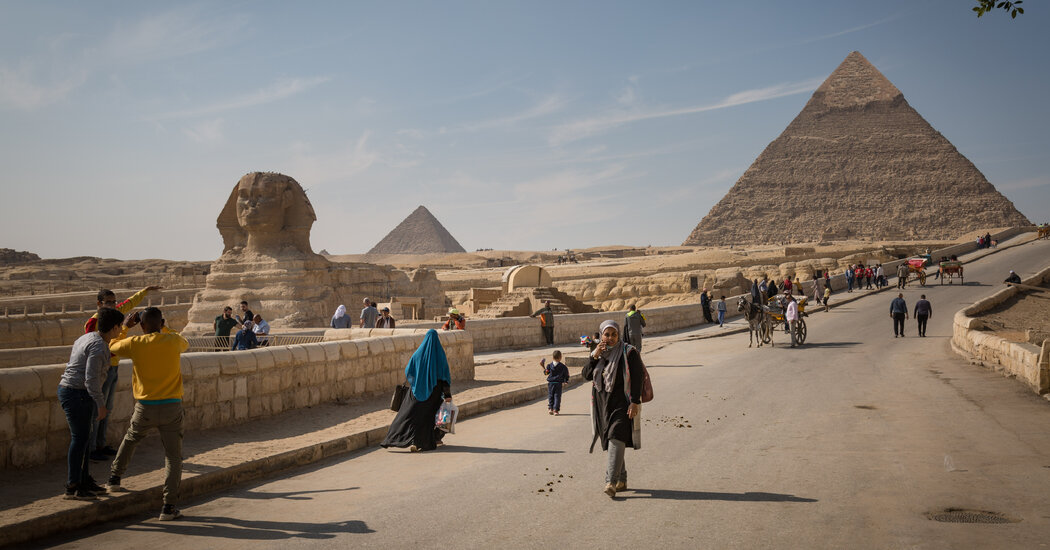 CAIRO — On a cool morning last November, Egypt’s tourism and antiquities minister stood in a packed tent at the vast necropolis of Saqqara just outside Cairo to reveal the ancient site’s largest archaeological discovery of the year.

The giant trove included 100 wooden coffins — some containing mummies interred over 2,500 years ago — 40 statues, amulets, canopic jars and funerary masks. The minister, Khaled el-Enany, said the latest findings hinted at the great potential of the ancient site and showcased the dedication of the all-Egyptian team that unearthed the gilded artifacts.

But he also singled out another reason the archaeological discoveries were crucial: it was a boon for tourism, which had been decimated by the coronavirus pandemic.

unearthed an ancient Pharaonic city near the southern city of Luxor that dated back more than 3,400 years.

The discovery came just days after 22 royal mummies were moved to a new museum in a lavish spectacle that was broadcast worldwide. In addition, the discovery of 59 beautifully preserved sarcophagi in Saqqara is now the subject of a recent Netflix documentary; a bejeweled statue of the god Nefertum was found in Saqqara; the 4,700-year-old Djoser’s Step Pyramid was reopened last year after a 14-year, $6.6 million restoration; and progress is apace on the stunning Grand Egyptian Museum, scheduled to open sometime this year.

But the pandemic has dealt a severe blow to the industry, and what had been expected to be a bonanza season became a bleak winter.

Tourism is a crucial part of Egypt’s economy — international tourism revenues totaled $13 billion in 2019 — and the country has been eager to attract visitors back to its archaeological sites.

attacks on tourists, bomb blasts that damaged prominent museums and a downed airliner that killed hundreds of Russian tourists in 2015.

But the sector was steadily recovering, with visitors attracted by both antiquities and the sun-and-sea offerings, growing to over 13 million in 2019 from 5.3 million in 2016. The coronavirus pandemic has reversed these gains, leaving hotels, resorts and cruises empty, popular sites without visitors and revenue, and thousands of tour guides and vendors with drastically reduced incomes or none at all.

“Tourism in Egypt just had one of its best years in 2019 and then came the pandemic which severely impacted it all,” Amr Karim, the general manager for Travco Travel, one of Egypt’s largest tour operators, said in a telephone interview. “Nobody knew what would happen, how we will handle it, how it will affect us. It’s strange.”

The pandemic, he said, disrupted how tour companies operated, how they priced their packages and how to work with hotels and abide by their new hygiene playbooks.

exposed the fragility of Egypt’s health care system, with doctors lamenting shortages in protective equipment and testing kits while patients died from lack of oxygen. With over 12,000 deaths, Egypt also recorded one of the highest fatality rates from the virus in the Arab world.

With a growing number of cases, health officials in Egypt have recently warned of a third wave of the virus. Authorities have also canceled large gatherings and festivals, and promised to fine those not complying with protective measures like mask-wearing, but many Egyptians do not abide by these rules.

Travelers are required to have a negative Covid-19 test taken 72 hours before arriving in Egypt, and hotels are mandated to operate at half capacity.

The crisis affected not just big companies like Travco but also smaller ones that had started betting big on the growing tourism industry.

Passainte Assem established Why Not Egypt, a boutique travel agency, in 2017 by interviewing prospective travelers and customizing itineraries for them. But after the pandemic began, most of her clients, who are from Australia, Canada and the United States, canceled their plans, she said, pushing her to suspend the business for now.

The experience left her feeling that “tourism is not stable at all,” she said. “It cannot be the only source of income. I have to have a side hustle.”

a company trying to revive and preserve traditional Egyptian handicrafts.

But Ahmed Samir, chief executive of the tour company Egypt Tours Portal, said the direct cash support for tourism workers was minimal. With reduced bookings, he was able to keep his employees in his marketing and social media departments on the payroll but at half salary.

“As a kind of sympathy to my employees, we tried to balance,” he said. But still, he added, “most of my friends’ companies closed completely.”

The slowdown in tourist arrivals has left areas usually swamped by tourists quiet.

At the Egyptian Museum in downtown Cairo, Mahrous Abu Seif, a tour guide, sat waiting for clients one morning. A few small tour groups, including from Russia and China, were going through metal detector scans to go into the museum. But he hoped that more clients would come.

“What can I tell you? We sit here and wait and wait,” he said, throwing his hands in the air and adjusting his sunglasses. “We don’t know what the future holds.”

On the other side of town, at the historic El Fishawy coffee house, a few locals gurgled their water pipes and drank mint tea or Turkish coffee while melodious Quran recitation ascended from a nearby speaker. Located in the centuries-old Khan el Khalili market, the cafe, along with souvenir and jewelry shops, was hit badly by the pandemic.

“I used to bring people here and it would be packed, but look at it now,” Mohamed Said Rehan, a guide with a local company, said of the cafe. “The pandemic is a big problem.”

Mr. Rehan said that he knows many colleagues and friends who had to stay home for months without income or who left the industry altogether. But he still clings to a thread of hope that tourism will pick up soon.

And some tourists have indeed started coming back.

In February, Marcus Zimmermann, a 43-year-old architect from Germany, was visiting Egypt for the first time, stopping first in Cairo and planning trips to the southern city of Luxor, home to the iconic Valley of the Kings. Mr. Zimmermann had hoped to come to Egypt last year with his mother, who dreamed of being an archaeologist, for her 70th birthday. But they had to cancel their plans because of the pandemic.

This year, he decided to come alone but promised to “plan the trip again” with her once she’s vaccinated.

Even though it will be tough attaining the prepandemic figures quickly, people like Mr. Karim who work in the industry hope tourists will start coming back by year’s end.

With all the new discoveries, renovations and the planned opening of new sites and museums, tourists will gradually flock back to Egypt, he said.

MIAMI--(BUSINESS WIRE)--Intelli Smart Homes, the leading smart home technology company, has been recognized as one of America’s fastest-growing … END_OF_DOCUMENT_TOKEN_TO_BE_REPLACED

Customers outside a Walmart store in Torrance, California, US, on Sunday, May 15, 2022. Walmart Inc. is scheduled to release earnings figures on May … END_OF_DOCUMENT_TOKEN_TO_BE_REPLACED

The past few years have been brutal on homebuyers' budgets. Would-be buyers have been priced out of some of the most desirable neighborhoods thanks to … END_OF_DOCUMENT_TOKEN_TO_BE_REPLACED